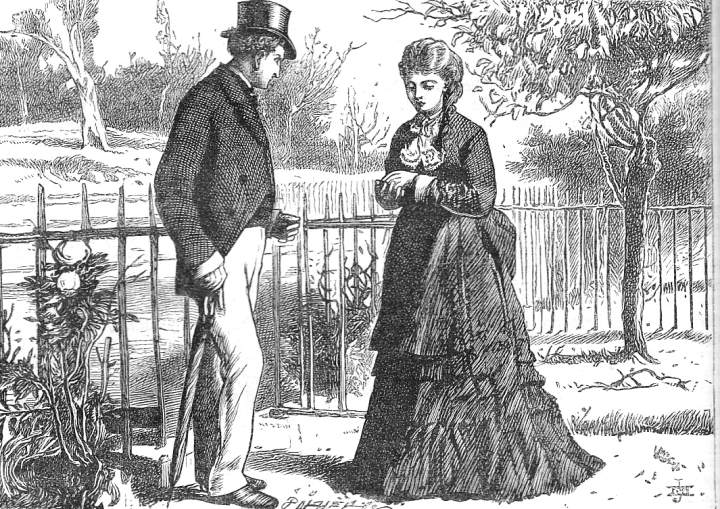 A variation on a theme of Alfred, Lord Tennyson…

“Come into the garden, Maud.”

“Not on your nelly. You know only too well that I am a neurasthenic recluse, and I prefer to remain in my bungalow with the windows shuttered, sitting at my escritoire penning tear-stained verses. When I have finished a particularly mawkish poem, I am given to flinging myself onto the floor and having a fit of the vapours, screaming and drumming my heels on the linoleum and beating my white fists upon the wainscot until they are bloody and bruised and require bandaging by Baines, my slovenly yet devoted maidservant. Why on earth should I risk my fragile mental equilibrium by coming into the garden?”

“I am reassured to learn that the garden is innocent of bats which do swoop and squeak, but there is much else out there guaranteed to send my weakling constitution into panic-stricken trembling. Those plants, for example. I grant you they are gorgeous, but their gorgeousness seems fierce, passionate, and even unnatural. There is hardly an individual shrub which a wanderer, straying by himself through a forest, would not be startled to find growing wild, as if an unearthly face had glared at him out of the thicket. Several, also, would shock a delicate instinct, such as mine, to pluck a delicate instinct at random, by an appearance of artificialness, indicating that there had been such commixture, and, as it were, adultery of various vegetable species, that the production was no longer of God’s making, but the monstrous offspring of man’s depraved fancy, glowing with only an evil mockery of beauty. They are probably the result of experiment, which, in one or two cases, has succeeded in mingling plants individually lovely into a compound possessing the questionable and ominous character that distinguishes the whole growth of the garden. It would not surprise me to learn that every single plant is a poisonous plant, as in the garden of Doctor Rappaccini in one of the mosses from an old manse by Nathaniel Hawthorne. And it is into the midst of this toxic organic miasma that you wish me to come skipping, without a care in the world? You must be insane!”

“Maud, all I am saying is that the bat has flown away from the garden for the time being, and I want you to take advantage of its absence to come for a stroll. Come nightfall, it will be back.”

“You wish me to stroll with you in the garden, but you make no provision to protect me against being pricked by poisonous nettles or pointy thorns. It seems to me I would be far better off slumped on a chaise longue, my limbs hanging limp, keening with woe and summoning Baines to fetch me an invigorating tisane.”

“Well, I thought a stroll followed by a chaste yet tingling embrace in a verdant arbour might be a welcome diversion from your long silent empty days. I am here at the gate alone.”

“It has not escaped my notice that you neglect to address my point about protective clothing, a point I feel quite justified in making on account of those monstrous experimental plants with which the garden is rife. Prone to hysteria I may be, and I do not dispute the fact, but I can still exercise my ladybrain to deduce logical conclusions, and in this case I suspect the stroll is less important to you than the embrace in the arbour, an embrace for which you are reluctant to have me encumbered by, for example, a beekeeper’s suit.”

“There are no bees in the garden, Maud.”

“Perhaps not, but as I have already made crystal clear, the gloves and hooded suit and hat and veil of the standard beekeeping suit would afford me protection against the perils of poisonous spiny vegetation. It is true that, with me thus engarbed, you may find any embrace we recklessly throw ourselves into a measure less tingling than you desire, but I would have you recall that Sylvia Plath kept bees and I am sure her embraces with Ted Hughes were never less than torrid.”

“It sounds to me as if you might after all be considering coming into the garden, Maud, if I make all the necessary preparations.”

“Do not get ahead of yourself. Thus far we have merely addressed the issue of appropriate apparel. If I am not to be reduced to a quivering quaking screaming doolally flibbertigibbet, there is much else to be discussed, negotiated, and decided, and plans set afoot to meet my conditions in full. You tell me that the black bat of the garden has flown. But how can I be sure you are not just trying to pull the wool over my eyes, in your eagerness to stroll and embrace, albeit chastely, but with tingling, in a verdant arbour? The bat may already have come back, and be hiding somewhere, concealed behind a frond, ready to flutter forth and come swooping and squeaking and get itself entangled in my flowing Pre-Raphaelite tresses, a circumstance that would inevitably lead to my being undone by palpitations and convulsions, leading to insensibility and possibly coma. Baines would have to run, run like the wind, to the grim bleak asylum on the hill to collect the necessary paperwork to have me admitted therein, and I fear she is no longer capable of running, being aged and infirm herself, as well as slovenly and devoted.”

“Oh, come on, Maud, just come into the garden for Christ’s sake!”

“Blasphemy will get you nowhere. In fact, now my girly ears have been assailed by the sound of the Lord’s name taken in vain, I must retire to my inner sanctum, armed with a copy of The Book Of Common Prayer, and I shall do my devotions with the last reserves of energy I possess, before crumpling to the floor in a pitiable heap of exhaustion and neurasthenia. A pox on your garden, sir!”

“Well, if that’s your final word, Maud, I think I shall instead go for a spin on my penny-farthing, out on the moors, in fog and mist, there to be set upon by werewolves.”

3 thoughts on “Come into the Garden, Maud”