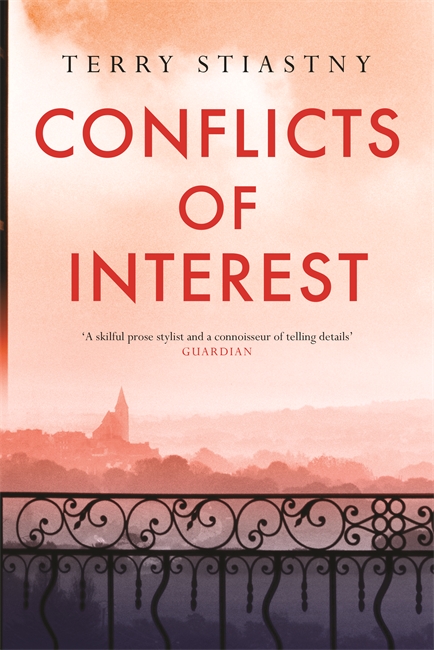 Brit reviews the second novel by Terry Stiastny (an occasional Dabbler), and finds it a subtle, ingeniously-crafted tale of betrayal and comeuppance…

Terry Stiastny’s debut novel Acts of Omission – which won the 2014 Paddy Power Political Novel of the Year (and was reviewed on The Dabbler here) – established the former BBC journalist as a remarkably clear-eyed but sympathetic dissector of human incompetence in the worlds of politics and international espionage. Conflicts of Interest is equally clear-eyed but notably less sympathetic, and is all the more bracing and enjoyable for that.

It tells the story of two arch-frenemies in different stages of midlife crisis. Lawrence Leith is a well-known TV overseas news reporter recently reduced to the status of boozy hasbeen: redundant, divorced and hiding out in a French village which he’s trying to pretend is an idyll. Leith is one of those slightly self-aggrandizing alpha-male hacks who like to make a bit of a show of being ‘quite at home’ in war-torn hell-holes, so it’s hard to feel too sorry for his demise. But we’re very much on his side when Martin Elliott turns up.

Formerly Leith’s TV producer but now a PR fixer and professional schmoozer within the Westminster Bubble, Elliot’s star is rocketing faster even than Leith’s is fading. He’s on the verge of landing a peerage from the government and a packet from selling his company. He’s also a workaholic Blackberry-addict, an infuriatingly fit MAMIL, a shameless Establishment ass-kisser and is conducting an illicit affair with a superhot French surgeon whom Leith fancies rotten but who is, as he ruefully admits, ‘out of my league’. Stiastny writes these men and their dialogue disconcertingly well. One senses that in their laddish joshings a very nasty remark is ever lurking just below the surface, and below that, quite possibly, is a good punch in the face.

The plot – which charts the inexorable unravelling of carefully-constructed personal, political and financial facades – is orchestrated with elegant simplicity. Stiastny’s previous novel similarly featured the downfall of a rising star, but whereas the disgrace of the young government minister in Acts of Omission was brought about largely by ill-fortune and untimely cock-ups, Martin Elliott’s can be attributed to that ancient adage, character is destiny. He diligently authors his own comeuppance.

Elliott comes apparently to ‘help’ Leith with a job offer to make a film about Isabelle –  the aforementioned superhot French surgeon – as she saves lives in the Congo. This is a deceptively ingenious piece of plotting. Actually Elliott is just using Leith, more or less, as he does everyone he knows. But the act of bringing his old colleague back into his life turns out to be pivotal for Elliott for a multitude of irony-riddled reasons.

For one, Leith saves his life twice in the novel (the first time out of love and sympathy, the second time out of vengeance). For another, by sending Leith to the Congo  – the scene of the key traumatic incident in his life – and then abandoning him there, Elliott demonstrates the selfish callousness which means he deserves a grand retribution. And for yet another, by inviting an investigative journalist with a grudge into his tangled web of corrupt acquaintances, he unwittingly creates the conditions to deliver that retribution, which comes in a final-chapter denouement of rare subtlety and aptness.

Stiastny is an expert prose stylist in the minimalist, Kazuo Ishiguro vein, where raging depths are sensed below a surface calm. Most reviewers of her first novel noted her ability to construct a beautiful paragraph or choose a perfectly telling detail. But in Conflicts of Interest her scalpel is, I think, even sharper.

Early on, as Elliott sits watching passers-by, Stiastny writes: The people in the village square seemed to be enjoying themselves without effort.

This strikingly simple line is significant. Genuine, effortless enjoyment of life is something that seems quite beyond the protagonists’ class of people: the rootless frequent flyers and multilingual citizens of nowhere who sacrifice marriage and family for their nearly-top jobs; the achievers; the overeducated ‘elite’  – in politics, journalism, or public service – who can never quite become elite enough for their own satisfaction.

There is potentially a rich comic seam to be mined here (I would love a whole novel about Leith’s awful ex-wife Harriet, whose children are terrified to tell her anything for fear it will turn up in her next confessional newspaper column), but Conflicts of Interest offers a glimpse of a darker truth. Terrible things can happen in the world because selfish, ambitious people allow them to, by turning blind eyes, or allowing grey areas to remain murky, or by following paths of least resistance if they lead to their own petty advancement.

Such, I suppose, is the banality of evil. Stiastny skewers it with intelligence, style and unusual efficiency.

Conflicts of Interest is published by Hodder & Stoughton – available to buy here.