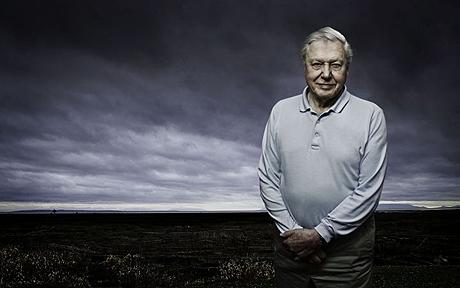 There is no major problem facing our planet that would not be easier to solve if there were fewer people and no problem that does not become harder — and ultimately impossible to solve — with ever more.
David Attenborough – People and Planet – a lecture to the Royal Society of Arts, March 2011

We may now be seven billion strong but you can still get away from us. David Attenborough began his latest BBC epic Frozen Planet (BBC One – Wednesdays, 9pm) at the North Pole and ended it at the South, surrounded by nothing but white and wind. Not an anti-capitalist in sight (except, perhaps, Attenborough himself).

He is well into his eighties now. Extraordinary longevity, hard work and a voice as evocative as Bill McLaren’s have earned him his status as one of the British media Untouchables. Like Stephen Fry or Robert Winston, he straddles populism and seriousness. The wildlife programmes for which he acts as frontman provide to the licence-payer (in return for the considerable sum invested) visual grandeur, entertainment and a fine sense of moral superiority – one feels that merely by watching one is somehow helping the planet, unlike those selfish plebs glued to soap operas or Sky Living. 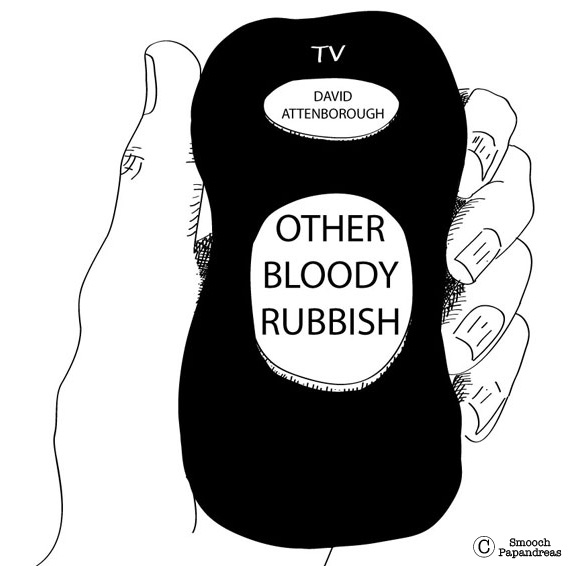 Attenborough has done an awful lot of these series but perhaps it was 2001’s The Blue Planet that marked the watershed, when technology took them from interesting and enlightening to eye-popping and mindboggling. Frozen Planet continues the upward trend, the opening episode including unreal, super high-definition ice landscapes, roaming glaciers and crystal-blue Arctic melt-lakes. Soaring Coldplay-ish tunes soundtrack the majesty. This is was what big tellies are for.

We also saw some animals – wolves hunting bison, polar bears mating and fighting, killer whales deviously knocking seals into the water so they could eat them. All gobsmacking, all wondrous, all, as ever, hopelessly anthropomorphized by Attenborough’s narration, which tells us what the beasts are thinking in their clever beastly brains. Having fought off his rivals and squired his mate, the male polar lumbered off, probably, we were informed, “relieved” to get back to his solitary existence.

Nature is viciously cruel (no, not just indifferent, dammit, cruel. It might not mean to be, but it is). I’m not saying that seeing polar bears or killer whales in action as ‘glorious’ or ‘beautiful’ is invalid, just that it’s pure human romanticism, as is all that Born Free and Circle of Life stuff. If you want to see happy animals you have to go to a modern zoo, where they live ten times longer than is ‘natural’ and get their meals brought to them on trays.

In the wild, virtually everything lives a terrified short life on the brink of starvation and, to the closest approximation, every species that has ever existed is extinct.

Which, of course, is exactly what should have happened to homo sapiens long before now, if you believed certain thinkers. As David Attenborough wrote in the New Statesman:

There have been prophets who have warned us of … impending disaster. One of the first was Thomas Malthus. .. His most important book, An Essay on the Principle of Population, was published in 1798. In it, he argued that the human population would increase inexorably until it was halted by what he termed “misery and vice”. Today, for some reason, that prophecy seems to be largely ignored – or, at any rate, disregarded.

That mysterious ‘for some reason’ might be explained by the fact that Thomas Malthus got it completely wrong. When he wrote about the overcrowding that would soon exhaust the planet’s resources, the human population was a paltry one billion. Malthus’ heir, Paul Ehrlich, was also very wrong, predicting many specific disasters in his 1968 book The Population Bomb that failed to come to pass.

Both Ehrlich and Attenborough are patrons of Population Matters, an organisation devoted to reducing the number of humans on the planet.  My advice is: be suspicious of any organisation set up with the express aim not of improving humanity’s lot, but of curbing its numbers. Some of their suggestions are laudable, such as providing education to women worldwide. This happens to reduce birth rates but educating women is a good in itself and requires no further justification; it isn’t a means to an end. The neo-Malthusans are popping to the fore again as we hit 7bn but the overall number means nothing, except as proof of our triumphs in reducing mortality rates and fighting hunger and disease, since some nations might be overcrowded and underfed but others export resources and, ageing, need more babies not fewer.

Attenborough exudes Old Beeb paternal wisdom as he gives us the Science Bits on Frozen Planet, but it seems he shares the Antarctic’s hostility to homo sapiens. Of course, Population Matters will argue that the purpose of limiting population is to improve the quality of life for those who do get born. But the waters are muddied by a range of other supposed benefits, including preserving endangered species and combatting climate change. I’ll bet there’s a hardline wing of Population Matters (and I’m not suggesting Attenborough is on it) whose idea of utopia is a posthuman Earth where the weeds grow unmolested. You wouldn’t want to give them any legislative powers.

The ultimate failure of Malthus and Ehrlich is a lack of faith in humans. Of course we’re capable of horror but if you want to find kindness anywhere on the planet you’ll need to turn to your own species. And your natural wonders are all very well but don’t forget the Sistine Chapel, the works of Shakespeare and Beethoven, St Paul’s Cathedral (when you can get the anti-capitalists out of the way of it), rock ‘n’ roll and The Dabbler. And Frozen Planet, a fine piece of human romanticism. Glaciers do have great beauty, especially in artificial, computer-enhanced high definition, but only people can see it. Don’t wish us away too soon, David.

Cartoon by Smooch Papandreas, whose latest book is the wickedly funny Damn United – 101 Reasons Not to Support Manchester United.