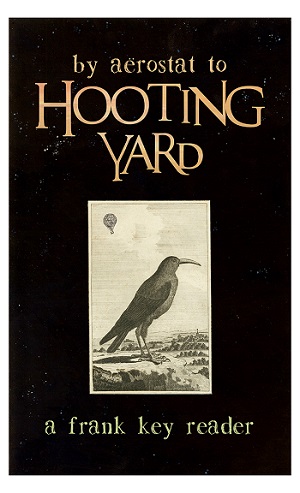 By Aerostat to Hooting Yard – A Frank Key Reader

By Frank Key, edited and with an introduction by Roland Clare

There are cult writers and then there is Frank Key. Described by The Guardian as the author who ‘can probably lay claim to having written more nonsense than any other man living’, Frank Key is a one-man prose factory, whose utterly original stories, published on the Hooting Yard blog and broadcast on his long-running Resonance FM radio shows, have earned him a dedicated following on both sides of the Atlantic.

Now, the baffling, brilliant, brutal, and hysterically funny universe of Frank Key is available on the Kindle. By Aerostat to Hooting Yard brings together the very best of Key’s fiction, making an ideal entry point for the uninitiated and a handy compendium for the devotee.

The stories collected in this ebook plunge the reader into the fully-formed parallel universe of Hooting Yard, with its forts and wharves, its strange cities and haunted zoos, its inexplicable violence and its cast of outrageous characters including intrepid explorer Tiny Enid, prolific pamphleteer Dobson, the hapless Blodgett and the terrifying Grunty Man.

Once you’ve seen the world through the eyes of Frank Key, nothing will ever look quite the same again.

This Dabbler Editions ebook contains 147 stories selected by nonsense aficionado Roland Clare, who also contributes an introduction which represents the first major commentary on the Hooting Yard oeuvre and is a must-read for all enthusiasts.

Buy now from Amazon.co.uk or Amazon.com.