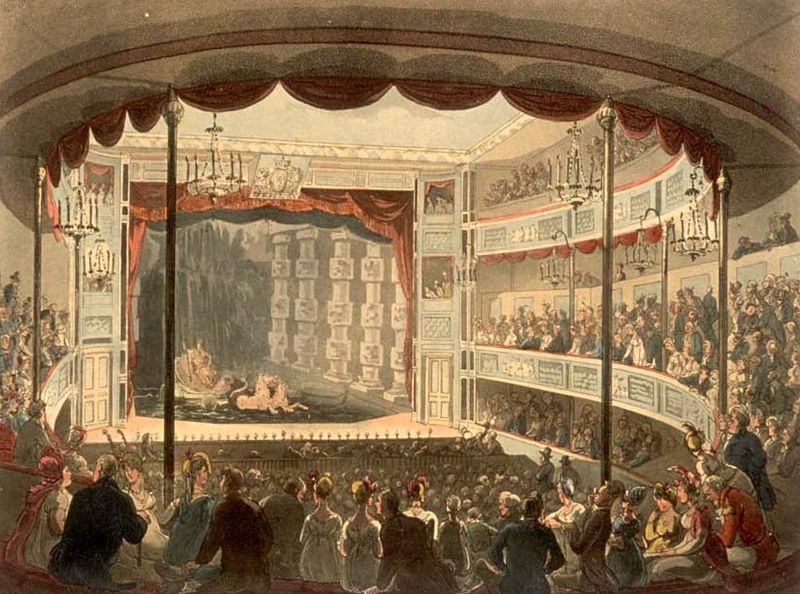 Walk with Frank down memory lane as he recalls some of the enticing acts who appeared at the Bodger’s Spinney Variety Theatre during its golden age:

Nobby Puck : The Human Windsock. Bells clanged whenever Nobby Puck appeared on stage. For ten awful days in the summer of 1907 he was held incommunicado by a gang of Papist fanatics. He escaped by means of a clever poison-gas device which he kept tucked inside his vest, and made his way back to Bodger’s Spinney just in time to do his windsock act at the annual jamboree.

Minnie Crunlop And Her Trailing Bandage. Over the years, many scholars have attempted to estimate the true length of Minnie Crunlop’s bandage. Brewgit, the infamous Prussian quack bandageologist, devoted over forty scientific papers to the question, leading his arch rival Buttonglue to accuse him of trifling, simplemindedness, and trafficking in poltrooneries. Brewgit was livid, and challenged his tormentor to a duel. They met in a desolate spinney at dawn. For weapons, they had magnetic cast-iron bradawls, sharpened to the point of implausibility. Before their scrimscrum could begin, however, Brewgit tripped over an abandoned churn, while Buttonglue developed a nosebleed. The affaire was never satisfactorily resolved, more’s the pity.

Magnet Boy! The Boy Magnet. Magnet Boy! The Boy Magnet was the brainchild of one Horst Preen, a dishevelled tugboat captain from Tantarabim. On a birthday frolic in a disused bun factory, he quite by chance discovered a matchless talent for disguise and physical agility. Apart from the famous Magnet Boy! act, he thrilled two continents with his wonderful ability to curl himself up into a ball and bounce across wide canals.

Mad Harry Gubbins And His Life-Size Cork Effigy. Interviewed by the police in connection with the Strange Case of the Dog-eared Postage Stamp, Mad Harry Gubbins made the following statement: “I have always gone to and fro accompanied by my cork effigy. It was presented to me on my twenty sixth birthday by my uncle, Demented Wenceslas Gubbins, with the express injunction that, were I to abandon the effigy, for example by leaving it leaning against a lamp-post near the docks, he would pursue me to the end of my days and badger me to throw myself into a pond.”

Guesbaldo Fubby And His Amazing Tea Strainers. Not for nothing was Guesbaldo Fubby known as the Tycho Brahe of Bodger’s Spinney. For one thing, he had a wooden nose, following a youthful polevaulting accident. He kept his nose carefully varnished and, at nightfall, he placed it in a little titanium jar at his bedside. “His tea strainers,” wrote Erskine Childers, “drove me crackers”.

Ingmar And Hetty : The Burst Appendix Twins. Ingmar and Hetty – who were not actually twins, and whose real names were Ingmat [sic] Baskerville and Magnesia Flowerdewdrop – hailed from a small island in the North Sea, from which they were expelled for reasons unknown. Adept at plunging metal objects into basins of salt water, they were killed in 1924 while picnicking near ostriches.

Underwater Pencil Sharpening With Rufus Corncrake. When Rufus Corncrake was but a tiny tot, he was carried in a majestic charabanc to the seaside resort of Shincramp, where, being fed on whelk-flavoured ice cream and acidic toffee, he was taken to the top of a big shiny plastic-and-tin upended-hovercraft-shaped helter skelter, had his library ticket removed from the pocket of his tunic, and was pushed, by his parents, down the spiralling vortex of the ride, halfway down which he was yanked by the scruff of his neck up into the illimitable heavens by an agency unknown and unthinkable, only to be deposited, four hours later, on top of the belfry tower at the great cathedral of St Frack, in the piping hot town of Ack on the Vug.

Captain Snap, The Cheery Bird-Strangler. Captain Snap was a proper caution. Plagued by a chesty cough, whitlows, and varicose veins, he was nevertheless the finest bird-strangler of his generation. Within his bailiwick, he adopted an air of unflappability. At his command, little children would happily chew their conkers and polish their hats. 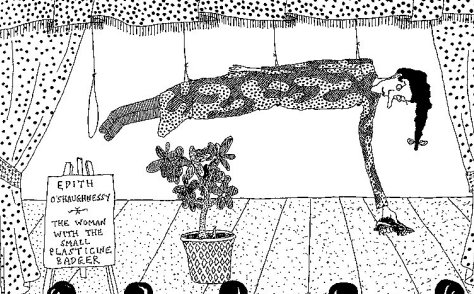 Edith O’Shaughnessy, The Woman With The Small Plasticine Badger. Was Edith O’Shaughnessy the living reincarnation of that most alarming of medieval minstrels, the irksome and cantankerous Gervase de la Maudling, who had once tossed quoits with the heir to the Finnish throne, and whose foppish mannerisms when hoisting his own flags on gala days made him a laughing stock? Almost certainly not.

The Zany World Of Claude Boohoocha And His Grotesque Sponge Hood. Claude Boohoocha used a spoon to eat his peas. When feeding upon buckwheat, gelatine or lampreys, he made use of a gigantic tin fork. A gleaming and very, very sharp knife came into play when he ate prunes, Paxo stuffing, the stalks of hollyhocks, or cream crackers. Whenever he had his dinner, he lodged his grotesque sponge hood in the lost property office at an important railway station, selected from a computerised database of over forty such termini.

The World-Famous Food-Splattered Jesuit. The world-famous food-splattered Jesuit was perhaps the most popular act ever to appear at the Bodger’s Spinney Variety Theatre. Why? Because – quite simply – he tapped a deep vein of what the Tundists call “Tund”. That’s why.