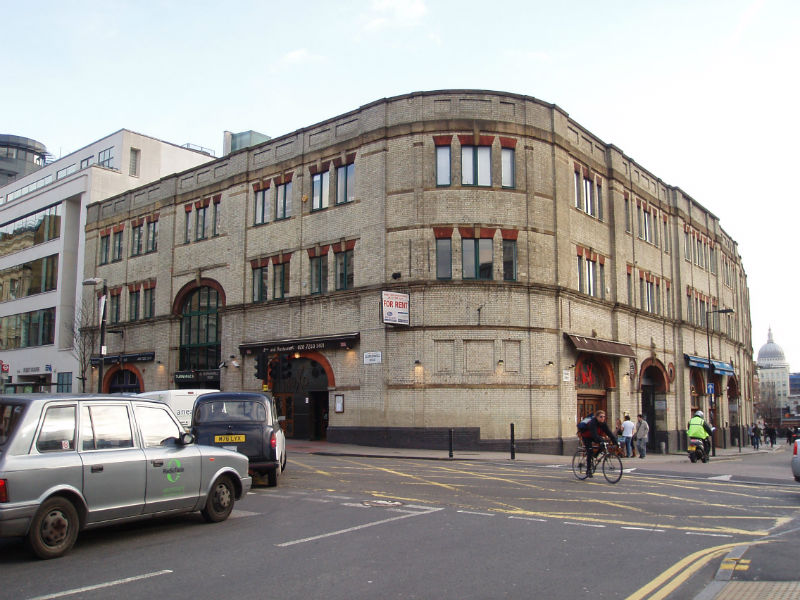 Amongst the many glorious works that Jonathon ‘Mr Slang’ Green produced for The Dabbler during his prolific spell as a regular columnist was the Slang Guide to London – a series of posts viewing the capital through the jaundiced eyes of the counter-language.

We thought it was worth repeating, so here’s the very first one, about Turnmill Street in EC1…

Now farewell to St. Giles
That standeth in the Fields
And Farewel to Turnbal strete
For that no comfort yeeldes
In Whitecross street and Golden Lane
Do strapping lasses dwell
And so there do in every street
Twixt that and Clerkenwell
At Cowcross and at Smithfield
I have much pleasure found
Where wenches like to fayres [fairies]
Did often trace the ground

From a 17th century ballad

A pub, a Pret, a Costcutter, a caff, a betting shop, an office, an office, an office, a bar, an office… and across the road a railway building site. Was it always thus? Hardly. Once there were houses with gardens running down to a fast-flowing stream that found its source up in the ponds of Hampstead and carved its way through meadows down to the Thames. It was the Fleet River, largest of the great watercourse’s tributary  streams; the name was Anglo-Saxon and meant tidal inlet. Its water ran mills for the nearby Clerkenwell priories and in time where one industry had been there were others, ‘stink industries’ such as tanneries which were permitted only outside the City walls in such suburbs as Clerkenwell though which the water ran. The abbatoirs of nearby Smithfield poured in their measures of blood and shit and upriver of Holborn (Old Bourne: old stream) the water was fouled and slowed and took a new name Turnmill Brook. And next to the brook ran a street, Turnmill Street, which referred to the old mills and was also found as Turnbull Street, which refers to the cattle of the meat market, and at the end of Turnbull Street which was also sometimes Turnball Street which seems merely a mis-spelling is still Cowcross Street. More offices. More eateries. A shirt shop. A ne’er-do-well reformed.

So too is Turnmill. Cowcross ran up to Smithfield which peddled animal flesh and Turnmill / Turnbull peddled the human variety. It was a centre of whoring, along with St Giles, Long Acre, Drury Lane (‘Sodom and all her painted drabs’) and nearby Whitecross Street, Golden Lane, and ‘every street twixt that and Clarkenwell, Cow-crosse, Smith-field . . . and all country girls’ which may have meant fresh and rural  and still un-poxed, but Hamlet wasn’t the only one who could pun. In 1600 Thomas Haywood in his play Edward IV named a few, the pinnaces, fly-boats and carvels who cruised the grimy lanes of ‘Turnbull and Spital’:  ‘Commend me to blacke Luce, bouncing Bess, and lusty Kate, and the other pretty morsels of man’s flesh.’  Beaumont and Fletcher wrote about it, as did Jonson (his Bartholomew Fair was just up the road in Smithfield) and Dekker pitied the whores as  ‘The poor catamountains in Turnbull who venture upon the pikes of damnation for single [i.e. minimal] money.’ Everyone knew it, including Falstaff who in Henry IV part II, mocks justice Shallow who ‘hath done nothing but prate to me of the wildness of his youth, and the feats he hath done about Turnbull Street; and every third word a lie.’

When ‘prentices rioted and burnt down the brothels, as they did each year on Shrove Tuesday, they would target Turnmill. In 1606 over two hundred ‘unknown disturbers of the peace’ had ‘assembled riotously and in warlike array, and armed with stones and clubbes wrecked houses in Turnmill. then moved on to do the same in nearby Cowcross Lane.’ There were too many narrow alleyways for the watchmen to catch them all, but five men were arrested and duly ‘whipt at a cartes tayle.’ It was not only rioters who were whipped. In 1647 one reads in Crete Wonders foretold by her crete Prophet of Wales  ‘T[h]at there shall also t[h]is present yesre be many crete [great] fires in . . . pick-hatch, Turnbull-street […] and other such religious places, where Venus Nunnes are cloystered, and [if] Tom Tod and his fellow flesh-dressers do not quench those inflammations, many . . . shall have all their haire burnt off.’  A flesh-dresser was slang for an official who punishes prostitutes with flogging. The lines can be taken literally, but as ever there may be double entendres and ‘burning’, of hair and other bodily parts, can equally well refer to venereal disease.

The reference to pick-hatch brings up another feature of the street:the pickt– or picket hatch. The word combines standard English picked, spiked and hatch, a half door, designed to prevent unauthorized entrance; it was commonly used as a brothel-sign and the entrance thus forbidden was most likely that of the authorities themselves.  The original Picket-hatch was a tavern-cum-brothel in Turnmill Street, although later uses are generic and refer to Clerkenwell’s  larger red-light district. A picked-hatch captain was a pimp. To go to the manor of picked hatch was to visit a brothel and is used as such, by Falstaff again, in The Merry Wives of Windsor.

In its Turnbull-street guise, the road offered a pair of place-specific slang terms: the Turnbull Street bee and the Turnbull Street flea were, respectively, a venereally diseased prostitute and a crab-louse. Both have been memorialized in early 17th century ballads.  ‘The Fayre Warning’ adjures:

If thou see a whoremonger passing at leisure,
Halfe fearfull his legs will drop off by the knees,
When every justle [i.e. act of intercourse] may do him displeasure,
He hath been so stung with the Turnbull-street bees:
when thou seest his case, beware of the place.’

Around the same time ‘The Married Woman’s Case’, collected by Samuel Pepys, explained how:

A Woman that to a whore-monger is wed,
is in a most desperate case:
She scarce dares performe her duty in bed,
with one of condition so base:
For sometimes hee’s bitten
with Turnbull-street Fleas,
The Pox, or some other infectious disease.

The street still turns up as one of London’s ‘dangerous neighbourhoods’ through the 18th century, when the crime-infested neighbourhood was known as Jack Ketch’s Warren but the good (bad?) old days were over by the 19th century. Even so Henry Mayhew’s successor, the author-sociologist James Greenwood, set his Tale of a Little Ragamuffin (1866) in Frying-pan Alley, off Turnmill Street.

Nothing remains. There was a gay bar once but property developers stamped out the poppers and silenced the disco and the boys moved on. Pot-valiant middle managers and unsteady secretaries may stagger their way to the tube after a celebratory Friday night but Falstaff  would shun them and the catamountains seek elsewhere for coin. The glow of mobile phones has softened the heart of darkness. The horror. The horror.

A version of this post originally appeared on The Dabbler back in June 2011.

2 thoughts on “The Slang Guide to London: Turnmill Street”