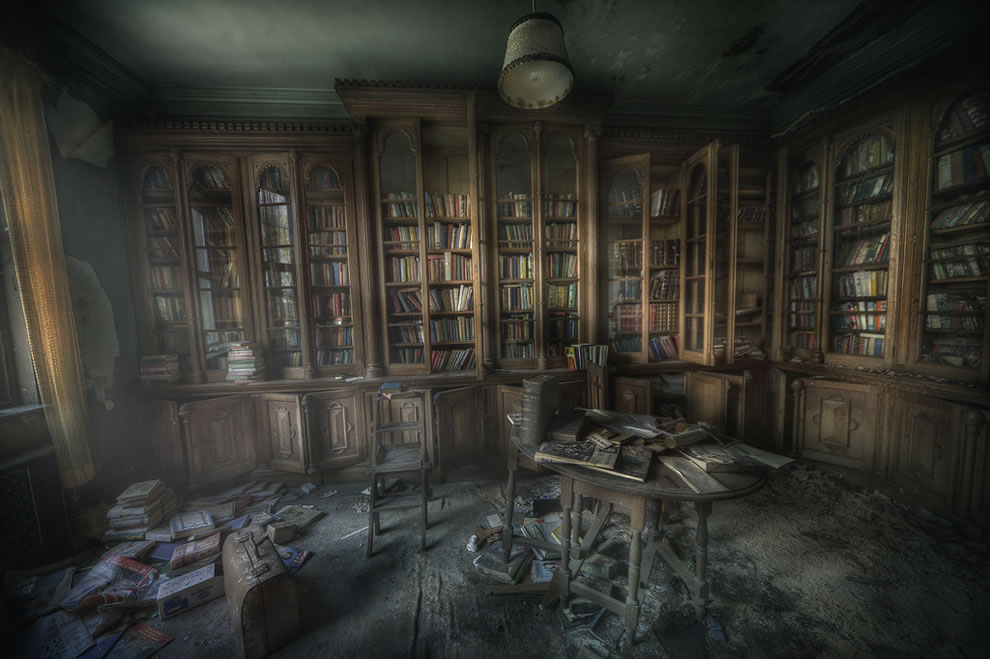 Jonathan Law begins his exploration of that curiously enduring but little-discussed literary trope, the library of imaginary books…

I knew it reminded me of something – that list of articles drummed out of Wikipedia for being too weird or dumb or just plain unhinged: in fact, a bunch of things I’ve read in books by Joyce and Rabelais and Thomas Browne and others. Unless I’m wrong, this very modern list extends an old literary genre – the seriocomic list of missing, imaginary, or otherwise phantom books.

It’s a trope you’ll find in works ranging from the 16th century to the present, by writers as diverse as Donne, Coleridge, and Neil Gaiman. When you look at these strange, inspired, sometimes demented lists of books that no one will ever read – as I mean to do in the next five or six posts – you’ll see that our Wiki list fits right in. There is the same crazy profusion, the same queer pathos, the same unnerving medley of the grotesque, the ribald, and the eerie. And something else too: like our Wiki rejects, these lists appear to focus a deep anxiety about the whole business of writing and publishing – and the appalling extent of both human knowledge and human ignorance.

As a trope or genre, the fictitious book list can be traced back to François Rabelais and the seventh chapter of his Pantagruel (1532). With a thirst to study as inordinate as his thirst for wine, the young Pantagruel makes his way to Paris, where he visits the “very stately and magnifick” library at the Abbey of St Victoire. The queer stuff he finds there is set out at length in a “Repertory and Catalogue” of the Abbey’s books – a list of 139 titles that garbles bad French with macaronic Latin. I give a selection in the ripe 17th-century translation by Sir Thomas Urquhart:

The Codpiece of the Law; The Pomegranate of Vice; The Churning Ballock of the Valiant; The Prickle of Wine; The Spur of Cheese; The Tailpiece-Cushion, or Close-breech of Discipline; The Cobbled Shoe of Humility; The Trivet of Good Thoughts; The Kettle of Magnanimity; The Cavilling Entanglements of Confessors; The Spectacles of Pilgrims bound for Rome; The Bagpipe of the Prelates; Of Peas and Bacon, cum Commento; The Rasping and Hard-scraping of the Cardinals; The said Author’s Apology against those who allege that the Pope’s mule doth eat but at set times; The Shitabranna of the Maids; The Bald Arse or Peeled Breech of the Widows; The Teeth-chatter or Gum-didder of Lubberly Lusks; The Paring-shovel of the Theologues; The Drench-horn of the Masters of Arts; The Gulsgoatony or Rasher of Cormorants and Ravenous Feeders; The Rammishness of the Spaniards supergivuregondigaded by Friar Inigo; A perpetual Almanack for those that have the gout and the pox; The Hotchpot of Hypocrites; The History of the Hobgoblins; The Gulling Fibs and Counterfeit shows of Commissaries; The Juglingatorium of Sophisters; The Niddy-noddy of the Satchel-loaded Seekers, by Friar Bindfastatis; The Racket of Swag-waggers; The Ape’s Paternoster; The Crickets and Hawk’s-bells of Devotion; The Trictrac of the Knocking Friars; The Dunger’s Martingale; Whirlingfriskorum Chasemarkerorum per Fratrem Crackwoodloguetis; The Clouted Patches of a Stout Heart; The Mummery of the Racket-keeping Robin-goodfellows; The Hotchpotch or Gallimaufry of the perpetually begging Friars; The Morris-dance of the Heretics; The Skinnery of the new Start-ups extracted out of the fallow-butt, incornifistibulated and plodded upon in the angelic sum; The Chimney-sweeper of Astrology; The Bumsquibcracker of Apothecaries

This is clearly a broad satire on the world of Medieval learning, as it appeared to the new men of the Renaissance – a crazy structure of old wives’ tales, monkish twaddle, and hair-splitting legal and theological debate. When you factor in Rabelais’s trademark scatology and a deal of sheer nonsense, the world of deleted Wikipedia articles does not feel so very far away. Our reaction is perhaps meant to be horror at all that waste of human brain cells, but what comes through is sheer, turbocharged comic energy. Perhaps, like other satirists, Rabelais fell half in love with his own grotesque invention – certainly the list grew ever longer in successive editions of the book.

In the 16th and 17th centuries any number of writers would follow Rabelais in making the imaginary book list a vehicle for satire or whimsical invention. This can perhaps be linked to the explosion of printed matter at the time, which seems to have induced a feeling of information overload comparable to that of our own day. The list of ridiculous books may have been a way of taming this abundance through parody, the catalogue form imposing a kind of order even as its contents spin off into madness. Some such complex of feelings seems to have inspired John Donne’s little-known squib The Courtier’s Library of Rare Books Not for Sale (c. 1605), a catalogue of imaginary titles that derives fairly obviously from the library of St Victoire. Where Rabelais’s target was the fusty nonsense of the Middle Ages, Donne’s seems to be the excesses of the new learning, especially in the fashionable forms then prevalent at court. Some choice titles from Donne’s list include:

Edward Hoby’s Afternoon Belchings [Hoby was a Protestant controversialist]
On Distinguishing the Sex and Hermaphroditism of Atoms
On the art of decyphering and finding some treason in any intercepted letter
Concerning the method of emptying the dung from Noah’s Ark
Martin Luther, On Shortening the Lord’s Prayer
The Princely Ocean, or The Pyramid, or The Colossus, or The Abyss of Wits: where by means of 60,000 letters to the Nobles of all nations … are related everything that is able to be related concerning toothpicks and hangnails
On the Navigability of the Waters above the heavens, and whether Ships in the Firmament will land there or on our shores on the Day of Judgment, by John Dee
What not? or a confutation of all errors in Theology as well as in the other sciences, and the mechanical arts, by all men, dead, living, and to be born, put together one night after supper

“With these books at your elbow”, says Donne, “you may in almost every branch of knowledge suddenly emerge as an authority.”

In contrast to Donne’s witty farrago, the writers of the late 17th century seem to have used the fake book list mainly as a rather blunt instrument of satire. A particularly scabrous example is the Bibliotheca Fanatica: or, the Phanatique Library, Being a Catalogue of Such Books as have been lately made and by the Authors presented to the Colledge of Bedlam – a supposed list of Puritan and Parliamentary writings that appeared in the year of the Restoration. Its flavour is given by such titles as A Treatise written in defence of his seizing on the Boy’s Close-stool-pan, and reserving the contents for his own profit, because the Lad was so profane to carry it on a Sunday, by one “Alderman Atkins, Shit-breeches”. In a similar vein, the aftermath of the Glorious Revolution threw up A Catalogue of Books, of the newest Fashion, to be sold by Auction at the Whigs’ Coffee-House at the Sign of the Jackanapes in Prating Alley (1693) – a Jacobite take-down of the new regime. As the book historian Adam Smyth has commented: “Books that don’t exist are particularly good at satire: unlike their embodied cousins, they make their point with precision, uncluttered by the freight of nuance.”

To find something closer to the attack on false learning in Rabelais and Donne, we need to skip forward a bit and expose ourselves to a much more alarming and sophisticated kind of satire. Open Jonathan Swift’s A Tale of a Tub at the title page and the first thing you’ll see is a list of “Treatises by the same author, most of them mentioned in the following discourses”. These include:

A Dissertation upon the principal Productions of Grub Street
A panegyrical Essay upon the Number THREE
A Panegyric upon the World
An analytical Discourse upon Zeal, histori-theo-physi-logically considered
A general History of Ears
A modest Defence of the Proceedings of the Rabble in all Ages
A Description of the Kingdom of Absurdities
A critical Essay upon the Art of Canting, philosophically, physically, and musically considered

The author of these extraordinary sounding works does not give a name, but admits to being a Grub Street hack – one of the new breed of commercial writers for hire, willing to turn his hand to any subject that pays. In this grubby persona, Swift leads us through a dizzying series of digressions and digressions within digressions, each of which parodies some contemporary mode of writing. Although no one has really got to the bottom of the Tale, it is on one level Swift’s satirical response to the new print culture of his day. By the early 18th century falling costs, rising literacy levels, and the end of direct government control had conspired to produce a thriving print industry and an increasingly print-hungry public. In London alone there were some 600 print shops, churning out cheap, ephemeral titles – almanacs, digests, periodicals – in previously undreamt of quantities. For cultural conservatives like Swift, this was threatening; how was the precious cultural capital of the past to survive in a world of such meretricious, barely literate nonsense? The Wikipedia entry on A Tale of a Tub describes the cultural context in terms that we might well find resonant:

During the Restoration the print revolution began to change every aspect of British society. It became possible for anyone to spend a small amount of money and have his or her opinions published as a broadsheet, and to gain access to the latest discoveries in science, literature, and political theory, as books became less expensive and digests and “indexes” of the sciences grew more numerous. The difficulty lay in discerning truth from falsehood, credible claims from impossible one. Swift writes A Tale of a Tub in the guise of a narrator who is excited and gullible about what the new world has to offer, and feels that he is quite the equal or superior of any author who ever lived because he, unlike them, possesses ‘technology’ and newer opinions.

Next week: Jonathan continues his quest for phantom libraries, from the Victorians to James Joyce to The Sims…

2 thoughts on “Phantom Libraries – Part 1: From Rabelais to Swift”