It has been heartening to see the emergence of Nick Kyrgios at Wimbledon. Ever since the golden era of McEnroe and Connors, men’s tennis has been rather lacking in jerks.

Krygios is a proper, no-bones-about-it jerk – but even better is that I can add him to my cherished list of Sportsmen Who Hate Their Own Sport. This is a subset of the list of People Who Hate The Only Thing They’re Good At, which includes Kenneth Williams (acting camp), Lyndsey Buckingham (being in Fleetwood Mac) and virtually all professional writers.

Wheeled out for a press conference by the Association of Tennis Professionals, the exciting young Aussie talent Kyrgios said: “I don’t really like the sport of tennis that much.”

He then went on to elaborate: “I was all for basketball and I made the decision to play tennis. I got pushed by my parents and to this day I can still say I don’t love the sport. If it’s NBA on one channel and a tennis tournament on the other, I’m watching NBA 100 per cent.”

Kyrgios is not the first top level tennis player to reveal his distaste for the game. The opening line of Andre Agassi’s autobiography Open is: “I play tennis for a living even though I hate tennis, hate it with a dark and secret passion and always have.”

Tennis of course naturally lends itself to loathing. Most professional players were delivered into its clutches in infancy by ambitious parents. The tour is gruelling and relentless and involves continually losing to the same opponents. The mechanics of the game are grindingly repetitive: first and second serves, the purgatory of deuce games, the implacable narrowness of the tramlines.

And it’s solo (except for doubles, which does look quite fun and so is far less compelling a spectacle). Solo sports are much easier to hate, as an elite level performer of them, than team sports. Most footballers love playing football (the only exceptions that spring instantly to mind are Stan Collymore and Mario Balotelli), but surely practically all golfers from the lowliest weekend amateur right up to Tiger Woods absolutely despise playing golf.

My very favourite Sportsman Who Hates His Own Sport is Ronnie O’Sullivan, the most gifted snooker player ever. He is visibly bored and irritated by the prospect of having to poke all those frigging balls into the poxy little pockets over and over again. But he is very, very good at snookering and no good at anything else. The torment of being in this cruel and ridiculous predicament manifests itself (just as it does for Kyrgios, Balotelli etc) in petty behavioural transgressions: brainstorms and mood-swings and lashings-out.

The funniest and yet saddest of these for O’Sullivan was that time he flicked the bird at a red ball for failing to go into a pocket.

Toby Young is leading a Tory campaign to elect Jeremy Corbyn as leader of the Labour party – apparently for three quid you can join as a supporter and have a vote. This is just the sort of schoolboyish stunt with which Young consistently undermines his bid for seriousness and I don’t approve. The country needs two parties of potential government keeping each other honest: one on the liberal centre-right and one on the social democratic centre-left. There are plenty of Silly Parties on which the irresponsible voter may spunk away his hard-won democratic right without forcing Labour to join their number.

For similar reasons I’m not sure I fully approve of George Osborne’s Summer Budget even though it was the first of the 18 Budgets I’ve written about professionally to properly gobsmack me with its political cleverness. Too clever by half, maybe. But then I suppose politics is ultimately about power and there’s little point in complaining about politicians being cunning about winning it.

Osborne’s approach to dismantling Gordon Brown’s hellish labyrinth of tax credits is ingenious. The centre-right view is that society functions better and people are happier when they get their money in wages rather than state subsidies – i.e. where the cash comes from is as important as how much of it there actually is. Brown’s tax credit system was designed to make it politically impossible for Tory chancellors to detach low-paid workers from benefit-recipients.

Add in the failure of trickledown economics because cheap EU immigrant labour is keeping wages at the lower end depressed even in a period of economic growth and it looks like Osborne is snookered. So what does he do? Rather than taking a neo-liberal laissez-faire approach and hoping for the best, he forces employers to pay a higher minimum wage, funded by cuts to corporation tax and an increase in the employer’s allowance. So he’s used the state to subsidise wages, but in a Conservative manner. I’ve no idea if Osbornism will work out, but it seems a very clever wheeze to me.

As a callow spad George Osborne drafted the then-mocked now utterly vindicated speech by silly-voiced William Hague in which he compared being in the eurozone to being trapped in a burning building with no exits.

In this gleeful bit of told-you-so-ism, Hague sums up the Europroblem in a brutally succinct sentence:

The eurozone… does not work, because either Greeks have to cure their poor economic performance or Germans have to pay them big subsidies forever, and neither are willing or able to do so.

The European project is an attempt by humans to overcome ancient, irreconcilably different approaches to life, but as a species we are quite clearly unable to climb clear of tribalism, and globalisation has made it all worse not better and History will never End. Roundheads and Cavaliers, Jefferson and Adams, Shia and Sunni. We live on a blessed fluke of an island where royalty comes in gangs and where we can cling to safe, fun rivalries with people who agree with us, like Scots and Australians.

Is there any commentator in sport who makes less use of the brain’s natural filter between the mental and the verbal than John McEnroe? Every half- or quarter- or eighth-formed idea is instantly spoken, sentences begun and then just experimentally worried away at until he decides to move on to another. It’s like jazz.

At an England cricket match some years ago my father and I were sitting in front of a young man who suffered similar verbal diarrhoea and kept up a multiply-tangential commentary on the action all day long.

Afterwards Dad summed up the performance with Hague-like succinctness: “Everything he thought, he said.”

To Cardiff, for the third day of the first Test of the 2015 Ashes series under an improbable Welsh sun. The Swalec Stadium (formerly Sofia Gardens) is too small for an Ashes venue (capacity 16,000) but it makes up for it in deferential welcomingness.

There is also, I suppose, a ‘great atmosphere’. On paper the idea of a crowd unsettling Australia’s demon fast bowler by singing The Mitchell Johnson Song at him all day is pretty funny. The reality of being stuck in the same stand as a row of drunken exhibitionists is less so. Some people don’t understand the proper rhythm of a day’s cricket. Morning: coffee and paper, serious study of the play, expectant buzz, polite appreciation of opponents. Afternoon: soporific slumber. Evening: rowdy jeering and partisan abuse. This of course is tied to the correct consumption of alcohol, which should be plentiful but paced. Don’t turn up for the toss at a tea-time level of drunkenness – that’s a schoolboy error.

Cricket is a team game comprised of individual duels and so ranks high in the Sportsmen Who Hate Their Own Sport stakes. “Sometimes as a cricketer you just long for it to rain,” wrote former England all-rounder Vic Marks once. “I’m not saying cricketers hate cricket, but when you’re playing a county game and the sky darkens and it starts to piss down, it doesn’t half fill everybody in the dressing room with joie de vivre… When it pissed it down, you knew were not going to fail that day.”

Watching cricket is its own torture – especially, by tradition, for the English. I’d rather watch England play Test cricket than do almost anything else. I have suffered. All those soporific afternoons, Aussie batters accumulating against medium-pace change bowlers. Great deserts of boredom and angst, then a sudden incongruous unreal moment of joy. Heaven is a place where nothing ever happens. At Cardiff on Friday I rubbed sun cream into the back of my burning neck and gazed across the field of green, the men in white, the yellow-hatted blocks of glum Australians, and I felt the existential weirdness of life and being and nothingness and what we can know and never know. Of the main international sports only cricket can really sock it you epistemologically. I thought of all the Ashes series gone and all the ones to come and how new Australians and Englishmen would still be hurling balls at each other long after my death in glorious games I would never see, and for the first time in a long time I thought that if it were possible it might not be a bad thing to live forever, after all. 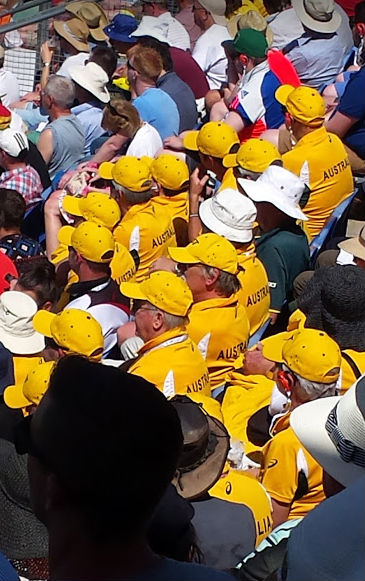