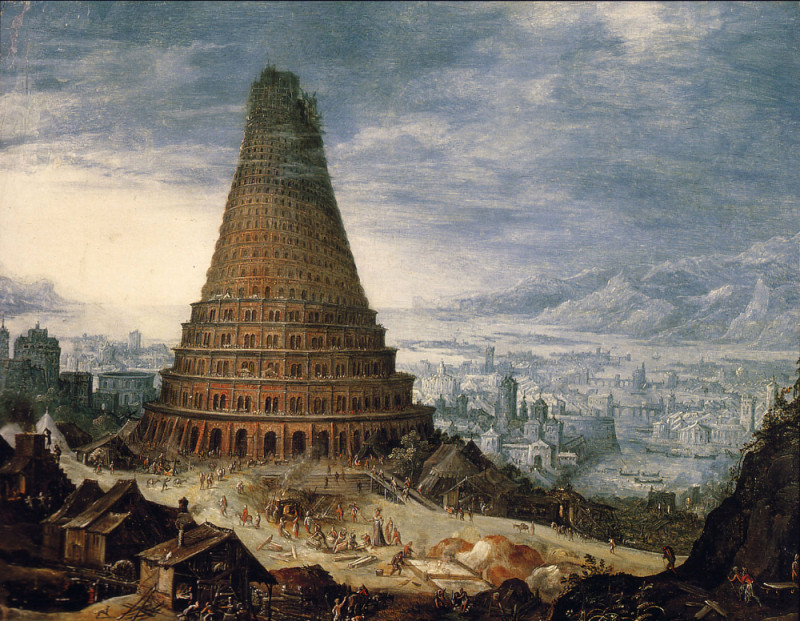 In the concluding episode of his series about Phantom Libraries and unwritten books, Jonathan Law comes at last to Borges, monkeys and Babel…

In all this talk of lost and phantom libraries there is one giant figure we have yet to consider, although his presence may have been felt hovering in the wings: the great Argentinian writer – and, of course, librarian – Jorge Luis Borges. In his most famous story ‘The Library of Babel’ (1941), Borges imagined what may well be the ultimate dream library – a vast edifice, practically coextensive with the cosmos itself, in which “an indefinite, perhaps infinite number of hexagonal galleries” house not just all the books ever written, but all the ones that could be written. The library is “total”, its books representing every possible permutation of letters and spaces and marks of punctuation – “All that it is given to express, in all languages.”

As Borges acknowledged, the basic conceit here was borrowed from the German writer and scientist Kurd Lasswitz, who had published a story called ‘The Universal Library’ back in 1901. In this curious work – less fiction, really, than thought experiment – Lasswitz applied principles of combinatorial mathematics to the rudiments of writing. As Western writing systems use less than a hundred possible symbols, and these can be combined in a limited number of ways, it follows quite naturally that “all possible literature must be printable in a finite number of volumes”. This means that given some mechanical means of extorting the necessary permutations (monkeys with typewriters?), we would ultimately get:

all the works which ever have been written in the past or can be written in the future … the lost works of Tacitus and their translations into all living and dead languages … all forgotten and still undelivered speeches in all parliaments … the history of the subsequent wars, all the compositions all of us wrote in school and college.

Borges’s first attempt to make something of this idea can be found in ‘The Total Library’, an essay written a year or two before ‘The Library of Babel’. Here he has already tapped into the vein of poetry lurking in Lasswitz’s mind-boggling but essentially arid calculations. The “blind volumes” of the Total Library would contain literally Everything:

… the detailed history of the future, Aeschylus’ The Egyptians, the exact number of times that the waters of the Ganges have reflected the flight of a falcon … my dreams and half-dreams at dawn on August 14, 1934, the proof of Pierre Fermat’s theorem, the unwritten chapters of Edwin Drood, those same chapters translated into the language spoken by the Garamantes … the premature epiphanies of Stephen Dedalus … the song the sirens sang … Everything.

In ‘The Library of Babel’ the metaphysical or existential implications of all this are taken a good deal further. With its endless, interconnecting galleries, dizzying stairs, and hints of some mysterious unattainable order, the Library of Everything becomes an icon of the universe itself; a space that human beings are doomed to wander in an anguished, maddening, mostly baffled search for meaning.

For if the books in the library promise a solution to every problem – a cure for every disease, an answer to every practical question or philosophical crux – this is small reason for optimism. The chance of finding an answer among the endless, indistinguishable, randomly shelved volumes is close to nil. And even if a plausible book were found, it would be unwise to trust it. The laws of the library mean that every book is shadowed by a myriad of variants – works in which any truths the original may contain are scrambled with lies and inaccuracies. For this reason, even that Holy Grail of the library dwellers – a faithful catalogue, explaining the content and location of every book – would be of little use, should it by some miracle come to light. Although such a catalogue has to exist somewhere among the interminable galleries, so too must thousands and thousands of false catalogues, thousands of works asserting the truth of these catalogues, thousands of works proving the fallacy of the true catalogue, and so on.

Yet the vast majority of the books in Borges’s library will not even be deceptive. They will be pure gibberish – random patterns of letters that yield nothing to even the most ingenious decoder. For every sensible statement or accurate fact there will be “leagues of senseless cacophonies, verbal jumbles and incoherences”. Indeed, searchers through the library will be lucky to find a single grammatical sentence. In a lifetime of combing the shelves, Borges’s narrator has found only three books that promise some sort of semi-intelligible content: The Combed Thunderclap, The Plaster Cramp, and one called Axaxaxas mlo. We are very much back in the world of deleted Wikipedia entries.

For most inhabitants of the library, the certainty that there is precious knowledge hidden somewhere among the shelves, and that this will certainly remain hidden, is too much to bear. Some take refuge in a faith that on some shelf, in some hexagon, there must exist “a book which is the formula and perfect compendium of all the rest” – and in rumours that knowledge of this One Book has been passed down in the form of esoteric traditions. Others believe that the library contains at its centre “a great circular book” that is God Himself. The more fatalistic find a comfort in the idea that – whatever happens to poor, benighted humanity – the library itself will endure: “illuminated, solitary, infinite, perfectly motionless, equipped with precious volumes, useless, incorruptible, secret.”

For all its labyrinthine depths, Borges’s fable of the library must be on some level a response to the print explosion of his own day – an era of hitherto undreamt-of literacy in which books, magazines, and newspapers were turned out in unprecedented volumes. The 1920s and 1930s might also be seen as the heroic epoch of the librarian; the era that saw the consolidation of the great national and public collections, the birth of library science, and the rise of the quantitative method in the social sciences (the dream that that if only the archive were large enough, and sufficiently well organized, it would offer the answer to all human questions). In that pre-digital world, the harvesting of knowledge could still be an exactingly physical affair, with its own ordeals and legends. As a guardian and interpreter of hidden things, the librarian still had some of the glamour of the spy, the detective, or the mage.

As is the way with speculative fiction, however, Borges’s fable has increasingly been seen less as an extrapolation from his own time and more as a premonition of our own. It has become almost a cliché to see Borges as a prophet of the Internet. With its unimaginable size, its bewildering lack of anything like a plan, and its aggregation of all human knowledge and much human folly, the library offers some rather obvious parallels to the world we enter every time we fire up Chrome.

In other ways, of course, the Internet is nothing at all like the library of the fable; for one, it contains hardly any actual gibberish (although an infinite quantity of nonsense); for another, the Babelites would have killed for anything like a search engine. What Borges’s fable does seem to capture quite uncannily, however, is our subjective experience of using the Net, especially now the initial thrill has long worn off. For Dale Lately, writing in Litro magazine all the way back in 2013, this is where the parable really kicks in:

What expresses better our long slogs through the internet — the insipid pulse of Twittertopia, the unceasing verbal slurry of the blogosphere, and the multitude of social networks – than this Piranesian prism of senselessness: literature as chimera, jumbled apocrypha, and verbal ephemera?

Certainly, there is something very familiar about the emotional journey undergone by Borges’s library dwellers – the way in which Utopian hopes morph soon enough into an equally incontinent despair. When it is first understood that the library contains all possible books, the reaction is one of euphoria: “All men felt themselves to be the masters of an intact and secret treasure.” As the real implications sink in, however, the mood becomes one of depression and inertia: “Obviously, no one expects to discover anything.”

For most of us now, I imagine, the Internet inspires a strange mixture of both feelings at once. We are simultaneously over- and underwhelmed, at once awed and bored. In these realms OMG! is only ever a step away from meh. It was with just this blend of feelings that I discovered, only the other day, that someone named Jonathan Basile had actually created Borges’s library in digital form. I suppose it was going to happen. According to press reports, Basile has constructed a website that can generate every possible page of 3,200 Roman characters (although not – yet – every possible combination of those pages). When the work is complete, this virtual Babel will contain “every book that ever has been written, and every book that ever could be … every play, every song, every scientific paper, every legal decision, every constitution, every piece of scripture, and so on”. It might sound awesome; but in practice almost every page will look like this.

Paradoxically, the effect of realizing Borges’s desperate fable in this way is to reduce it to a mere digital sideshow; just one more stop on the non-stop electronic merry-go-round. I suppose it could be worth two or three clicks out of your daily 5,000 (now the average for anyone who works in an office, I’m told) – but more than that? You could search the library for your name, your pet’s name, the town where you were born. I even put in a few extracts from my 1979 diary and found them soon enough, which was more than a little eerie. But when you’ve done all that? Basile suggests one possible use for his creation that even Borges did not anticipate:

Those who tire of being constantly thwarted looking for meaning among the library’s babble can use reading its jumbled texts as a form of meditation. Eventually your mind learns no longer to search for or expect significance. 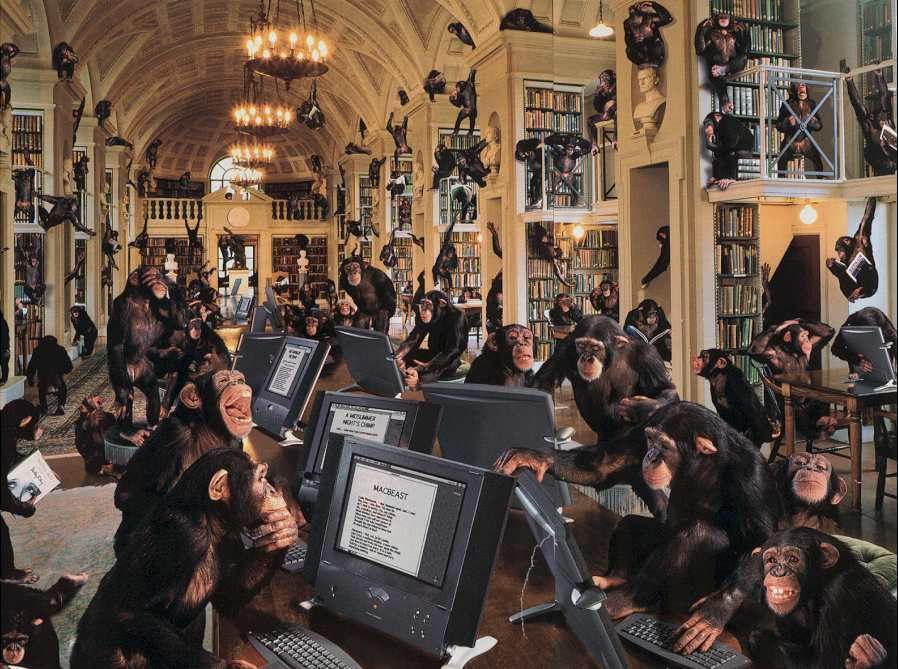