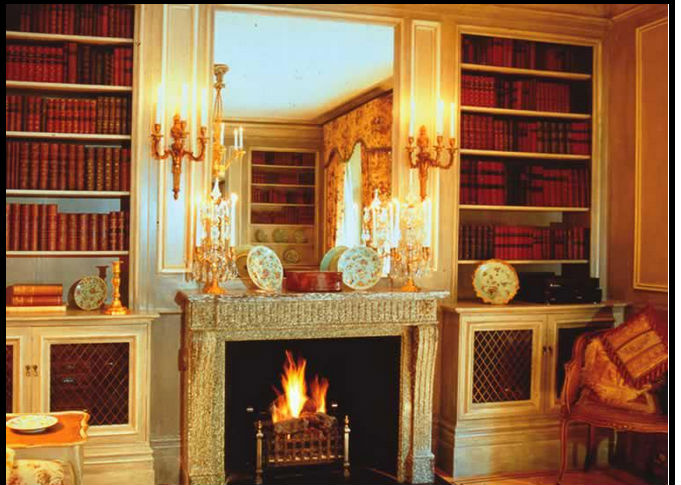 Jonathan Law continues his exploration of that curious and very funny side-alley of literature: the library of non-existent books…

Victorian literature has nothing to compare with the ribald, fantastical book lists of Rabelais, Swift, or Donne. And yet the era made its own singular contribution to the history of the phantom library – and that in the most physical form. It was the splendid Dr Beachcombing – proprietor of the bizzarehistoryblog – who first alerted me to the faux libraries of the Victorians; the shelves of purely ornamental ‘books’ that enjoyed a curious vogue in the mid-19th century, when wealthy homeowners used them to cover wall space or hide doors and other utilitarian features. Volumes would be carefully crafted to look as convincing as possible, and this often involved the addition of spoof titles to amuse or bemuse visitors.

An early example of such a scheme can be found in the great library at Chatsworth, where the 6th Duke engaged Thomas Hood to come up with scores of facetious titles (Lamb’s Reflections on Suet, Lord Byron’s Sermons, etc.). A visitor to Aldermaston Park in the 1860s was similarly “much astonished” to find the library full of artfully faked books like the Logbook of the Ark and Plans and Elevations of the Tower of Babel (2 vols.). There were also notable faux libraries at Marlborough House in London and at the British Library itself, where the circular reading room is surmounted by hidden doors filled with dummy books.

Perhaps the best known project of the kind, however, was the ‘library’ created by Charles Dickens at Tavistock House, his London home in the 1850s. Dickens had the door of his study disguised to look like a bookcase, and arranged for it to be filled with some thirty titles of his own specification. Although most of these were purely whimsical – Captain Parry’s Virtues of Cold Tar, Bowwowdom: A Poem, Drowsy’s Recollections of Nothing (3 vols.), Heavyside’s Conversations with Nobody (3 vols.), Growler’s Gruffiology, with Appendix (4 vols.) – others had a harder satirical bite. Titles like A History of a Short Chancery Suit (21 vols.) and Hansard’s Guide to Refreshing Sleep (“as many volumes as possible”) remind us that it was here that Dickens wrote Bleak House and Little Dorrit. Many show the sturdy scorn for the past that was perhaps the most radical thing about Dickens’s social thinking:

The Wisdom of Our Ancestors  (7 vols.): I Ignorance, II Superstition, III The Block, IV The Stake, V The Rack, VI Dirt, VII Disease

The Virtues of Our Ancestors (short)

In its attitude to the ‘wisdom’ of the past, if nothing else, the library at Tavistock House was a true descendant of the library of St Victoire.

The 19th-century faked library may seem absurdly of its time, but in one form or another it lives on. While Googling about to research this piece, I came across several purveyors of faux books to the modern home – upscale interior decorators who will help you to hide fridges, radiators, and TV and computer screens. The use of the shells of books to mask our IT clobber seems particularly suggestive – but of what? Similarly, I can’t get it out of my head that there is a unique faux library in Google’s offices in Cambridge, Mass.; a wall covered with the spines of books that have been boned and gutted for the ongoing Google Books project.

In the 20th century, lists of imaginary books abound – but seem to be associated with two sorts of writing in particular. On the one hand we have the erudite modernist or postmodernist text, with its delight in all things inter- and meta-. Here the point of the book within the book is often to insist: Look, this is all made up – and don’t for a moment forget it. On the other, we have the novel of high fantasy, where books are asked to do the opposite job; like all those made-up maps and histories and languages, they are there to fill out the back-story – to build an immersive world that the reader can inhabit like a dream. Loads more could be said, but for now here is a curious list of books from Finnegans Wake – a work that might be said to have a foot in both camps:

… Rockabill Booby in the Wave Trough, Groans of a Britoness, Ought We to Visit Him? Cock in the Pot for Father, A New Cure for an Old Clap, I Led the Life, The Following Fork, Noppy Tipped a Nappiwenk to his Notylytyl Dantsigirls, I Ask You to Believe I was his Mistress, He Can Explain, What Barbaras Done to a Barrel Organ Before the Rank, Tank and Bonnbtail, Suppotes a Ventriliquorst Merries a Corpse, Of the Two Ways of Opening the Mouth, Smocks for Their Graces and Me Aunt for Them Clodshoppers, In My Lord’s Bed by One Whore Went Through It, Up from the Pit of my Stomach I Swish you the White of the Mourning, Measly Ventures of Two Lice and the Fall of Fruit, The Flash that Flies from Vuggy’s Eyes has Set Me Hair On Fire, A Nibble at Eve Will That Bowal Relieve, An Oustanding Back and an Excellent Halfcentre if Called on …

With its weird blather and more or less open lewdness, this is redolent of both Rabelais’s monkish library and our own original Wiki list.  Like Rabelais, Joyce is on one level spoofing the publishing of his time – in his case, the novelettes, pious or moralizing tracts, tear-jerking ballads, advice columns, and prurient journalese lapped up with relish by the Plain People of Ireland. It is not, perhaps, a huge step from the list above to the ‘World’s Twelve Worst Books’, as distributed to a grateful populace during the great dream sequence in Ulysses:

Nor, it must be said, to the 23 books of Leopold Bloom’s household library, as itemized later in the novel – although these at least show an aspiration to self-improvement:

… The Useful Ready Reckoner, The Secret History of the Court of Charles II, The Beauties of Killarney, When We Were Boys by William O’Brien M.P., Thoughts from Spinoza, Voyages in China by ‘Viator’, Hozier’s History of the Russo-Turkish War, A Handbook of Astronomy, The Hidden Life of Christ, Physical Strength and How to Obtain It, Short but yet Plain Elements of Geometry written in French by F. Ignat. Pardies and rendered into Englifh by John Harris D.D. London …

However, something a bit different is also going on with this list of Wake titles, I think. Although a satirical element is no doubt present, at some level Joyce is aligning this stuff with his own impossible epic – on the grounds that any literary production can’t help but be telling the same old tale: the Fall of Man, acted out over and over. A Nibble at Eve, I Led the Life and the rest are less a list of books than a list of names for the same book – which would, of course, be the one we call Finnegans Wake. 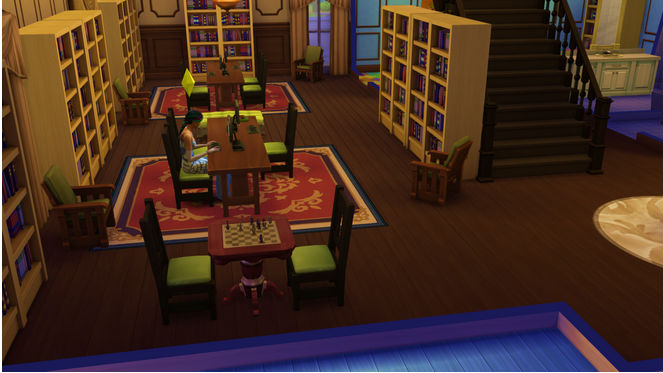 If fictitious books loom large in the fantasy genre, it is perhaps no surprise that they should do so too in games, where the goal of creating a self-contained, entirely immersive world is taken to the next level. In particular, books play a crucial role in the daddy of all life-simulation games, The Sims. In so far as the game has an object, it is to nurture the aspirations of your characters and to keep them happy and fulfilled – and the large library of in-game books provides a critical means of doing this. Books enable your Sims to acquire some basic skills (fishing, cooking), to further their professional ambitions and hobbies, and to enhance their self-esteem and relationships with others. Apart from all the how-to books, there are also novels in a range of popular genres (fantasy, historical, humour) that should keep them from getting too bored or mopey. Indeed, your characters may even develop literary skills and write and publish books of their own – which can then be bought and read by other Sims.

I’ll conclude with a selection of the thousand or so titles available to virtual readers in Sims 4 – a list that holds up a fascinating mirror to the modern publishing industry and its obsession with ‘self-help’ (now the internationally top-selling genre bar none). As such, this is a phantom library worthy to stand by those of Rabelais, Swift, and Donne:

Cha Cha Cha Ching; Charisma Vol. 1: Fixing the Friend Problem; Cheating With Chads; Compendium of Curses; Coping with Geese and Vipers; Counting for Those Who Cannot; The Curator’s Lost Museum; Cyber Skateboarder; Cyber-stalking And You;

Deadly Delights: Catching Crocodiles and Mummyfish; Dealing With Whining From Engines and Pilots; Doctor Macabre; Do I Exist?; Don’t Tread on Me: A Robot Manifesto on Freedom;

Effective Luminol Spraying Techniques; Eggs Machiavellian; The Epic of the Tattered Trousers; The Evolution of the Robo-Llama; Excellence through Jargon;

Handiness Vol. 1: Unplug It First!; Handiness Vol. 2: Turn off the Water!; Hotel Diavolo: Hell’s Bellhops; Howdy! Means Hello; How Rain Built the World; How to Fix It When News Breaks; How to Get Noticed by Not Being Seen; Hymn of Festive Stone;

Improving Conductivity between Brass and Woodwinds; Inside the Robot Mind;

Lady Veronica Farfleton and the Magical Harpsichord; Learning to Speak Officer; The Legend of Queen Nosylla and King Nayr; Living With Mutation; Llama Rights; Loafing, Whining, and Thou; Logical Fallacies You Can Really Believe;

Nectar Making: The Culture, The Lifestyle; Nitrates: They’re Not Just for Bombs Anymore; The Noble History of Socks; Noodles! And Sauerkraut!; Not Expecting Much;

Sagebrush and Sixguns; The Sandwich Horror; Signs You’re A Clone; (sic) and Its Use In Important Stories; The Silence of the Llamas; Snake Oil and Other Sound Investment Strategies; So Hot in Binary; Spellslinger: Have Wand, Will Travel; Spinning Mass Hysteria; Sports Team Extreme; Squares are Not Triangles; Sunsets and Other Fun Things to Ride Into; Supercute Magical Girl Maya; Swish, Dribble, Swish;

The Ultimate Guide to Overhyping Sensationalism; Under Siege and Ogre Powered; Unicorns for Audrey;

The Warlock of Palladia; Wax Until There’s No More; Werecat and Womrat; What Do You Mean By Communication?; What to Know; When to Rave and When to Riot; Where’s the Soup?; The Whiskered Deep: Catfish and You; Whistle while you Twerk; The White Flag of Victory;

Zen and the Art of Not Falling Off a Horse; Zombies? Zombies!

5 thoughts on “Phantom Libraries – Part 2: From Dickens to The Sims”