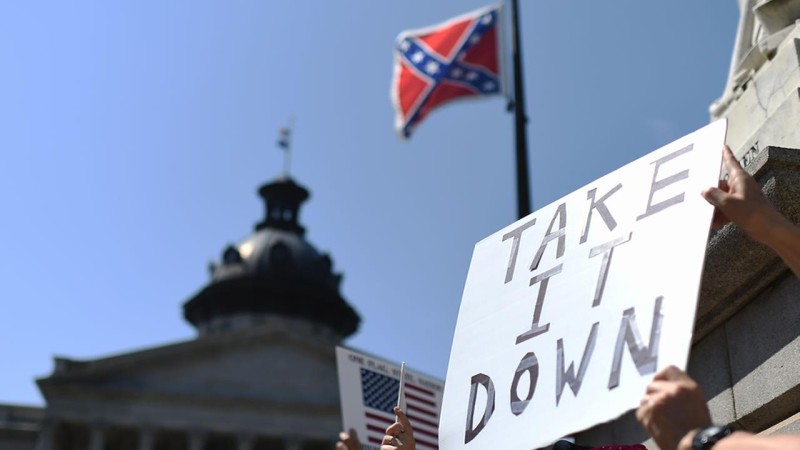 Rita reckons that in the southern states of the US, history is written by the losers…

That winners write the history books is conventional wisdom, but it is turned on its head here in America. The losers of the Civil War seized control of the popular history narrative almost as soon as Grant and Lee left Appomattox Courthouse. Perhaps the magnanimity of the victors played some part. In most countries civil wars end with show trials and executions. But although there were calls for Lee and other Confederate leaders to be tried for treason it never happened. Grant wrote, “I will resign the command of the army rather than execute any order to arrest Lee.” Soon the brutal reality of the Civil War was draped in the romantic gauze of a glorious lost cause, a noble fight to preserve a heritage, a “way of life” threatened by Northern aggression. That the way of life involved slavery, the proximate cause of the rift between North and South, was downplayed in favor of the more anodyne sounding “states’ rights.” It is no surprise that the descendants of slaves reject this narrative. For them the Union’s victory in the Civil War represents freedom, but a freedom that has been violently resisted into our own time. The recent murder of nine African-Americans in a South Carolina church by a young white man provoked the clash of these competing narratives once again. This time the historical argument focused on the Confederate battle flag, for some a symbol of heritage and noble sacrifice, for others a symbol of racial hatred.

Just as many Americans don’t turn to scientists for their science, many don’t turn to historians for their history. Local school boards, elected officials whose often deeply partisan political opinions shape school curricula, control the content of textbooks. Recently the Texas School Board made headlines with its revised history textbook, which downplays the role of slavery in the Civil War. Slavery is listed as the third cause of the war after sectionalism and states’ rights and is never mentioned again. The KKK and Jim Crow don’t appear at all and segregation gets just a minor passing reference. Pat Hardy, a Republican member of the Board, was quoted as saying that slavery was a “side issue to the Civil War.” So the loser’s version of history wins for yet another generation of young Southerners.

The current intense war of words over the Confederate flag does include the opinions of some actual historians, many of whom were featured in op-eds, letters to the editor, television interviews, and online media. There were some lessons for all of us. I had the impression that the Confederate flag had been flying ever since the Civil War ended. That made the argument that the flag honored the Confederate war dead, not their cause, seem somewhat reasonable. But now I learned that it was only in the 1960’s that the flag reappeared across the South as a defiant symbol of opposition to the Civil Rights movement and federally mandated school desegregation. That certainly lends credence to the argument that it is a symbol of racial animosity rather than a celebration of heritage. The historians also made short shrift of the specious argument that slavery was a “side issue” to states’ rights. It was the claim of the states’ right specifically to continue the institution of slavery that led to secession, not some generalized theory of rights. Historians point out that if you go to the primary sources and read the declarations of secession by the individual states, you will find they all clearly declare that the right to keep slaves is the reason for secession.

Of course it is a natural human tendency to want to think well of one’s ancestors and to hide any embarrassing family stories in the attic. How much better to think that one’s forebears fought for the vague and stirring sounding principles of states’ rights and “way of life” than actually admit they wanted to perpetuate slavery. A case in point is a recent scandal involving the PBS genealogy series “Finding Your Roots” in which Harvard historian Henry Louis Gates Jr. reveals the family histories of celebrities. It came out (via the Sony leaked emails) that actor Ben Affleck had requested that one part of his heritage, a slave-owning ancestor, be left out of the program because he found it “embarrassing.” Gates, himself an African-American, and the show’s producers acquiesced to the request. In the wake of this revelation the show was cancelled pending new procedures and the Affleck episode was withdrawn. But Affleck is little different from the multitude of white Southerners who want to forget or minimize the history of slavery. Margaret Biser, a tour guide at a historic plantation, recently reported that white visitors often resent the slavery part of her presentation. One man complained: “I just want to say that dragging all this slavery stuff up again is bringing down America.” Many seem anxious to believe that most plantation owners were kind to their slaves, that cruelty was a rare aberration. One woman actually asked: “Did the slaves here appreciate the care they got?”

On Friday July 10, after 54 years, the Confederate flag came down from the South Carolina State Capitol grounds. So one skirmish in the battle for American History is over, but the war will surely go on. A flag is merely a symbol; it is much harder to change hearts and minds.

3 thoughts on “Who owns American History?”