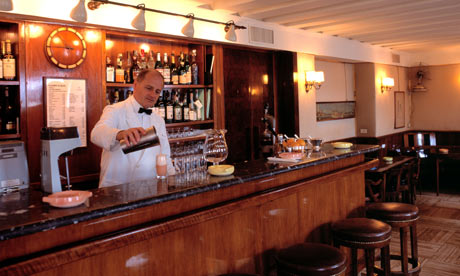 Luke Honey, proprietor of The Greasy Spoon Blog, takes a grand tour to Venice, and one of the world’s most famous bars…

I’m not sure how many “Harry’s Bars” there are in the world. Quite a few, I expect. There’s that famous pub in Paris, there’s the late Mark Birley’s smart dining club in London; I would imagine there are some pretty divey bars in god-forsaken fleshpots using the name. But for me, the one and only, the place that can truly describe itself as “Harry’s Bar” is the famous institution in Venice, opened by Giuseppe Cipriani in 1931.

I’ve unashamedly described my love for this place over the years- and I make no apologies for it. I like its wooden simplicity (a bit like a saloon in a varnished schooner), I like the fact that the food is prepared by “cooks” rather than “chefs”- suggesting a remarkable honesty, at least when it comes to the food. I like the immaculate service- the way you can return a decade later, and there will be the same barman behind the counter, I like the continuity; the idea that the ghosts of Ernest Hemingway, Orson Welles, Truman Capote and Peggy Guggenheim might just, if you played your cards right, come over and say hello. 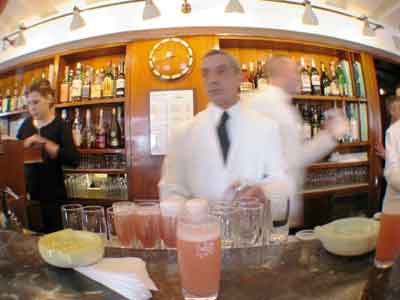 Very many years ago, as a callow youth (all of nineteen years old) I developed an interest in the Dry Martini. I was in Venice with my girlfriend of the time. We were shy and naive. We had never been to Harry’s before. We plucked up courage and pushed through the hallowed swing doors. It was pouring with rain. We found a seat at the bar and ordered two dry martinis. Harry’s serve them in tiny, rather stylish little tumblers with their famous Deco motif, frosted, very cold and straight from the ‘fridge. The barman- Mr Claudio Ponzio please step forward- was charming and treated us as if we were royalty, even though starry people like Roger Moore and Michael Caine happened to be sitting over in the corner. The next day we came back, and Claudio had “your usual, sir?” waiting for us before we had even arrived, served up with a wry smile. Now, that’s why I like Harrys’ Bar. 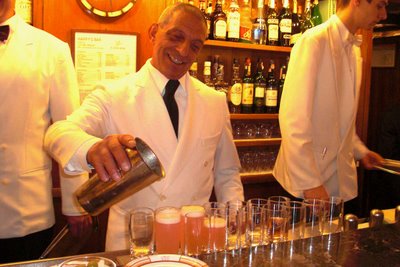 There will be certain people- visitors to Venice- who will grumble about the place “not being as good as it used to be”. They will complain about the quality of the Bellinis; about the number of badly dressed tourists packing out the downstairs bar, they will dismiss the exorbitant prices in the separate restaurant. Despite its fame, Harry’s remains remarkably unpretentious- and this, I think, might be the cause of the trouble.

But I do think- and I’ve been meaning to say this for some time- that’s it’s often a question of respect, which Venice, as one of the greatest tourist destinations in the world often doesn’t get. The last time we were there (a few months ago) we were greeted with a reserved charm, and offered a little dish of canapés. Just for us. We had just been to La Fenice- or possibly High Mass at St Mark’s (I forget which, my wife is a Catholic) and were dressed appropriately, a suit for me, my wife as immaculate as ever. You get back what you give. 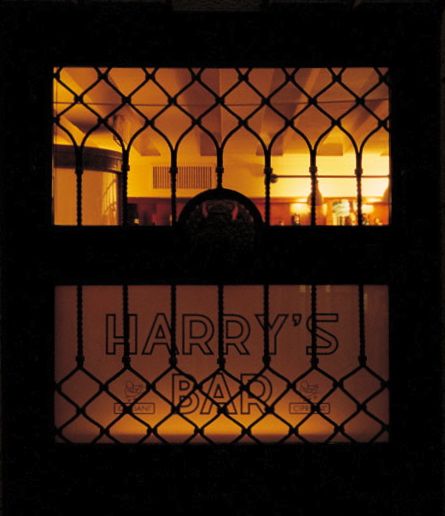 May I also recommend The Harrys’ Bar Cookbook by Arrigo Cipriani? If our house ever caught fire, this would be first cookery book that I would try and save. We use it the whole time. The recipe for Minestrone is certainly the best version I’ve made- so far. Pollo alla Veneta and Insalata di Cape Sante are particular favourites. 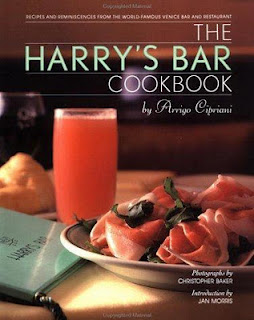