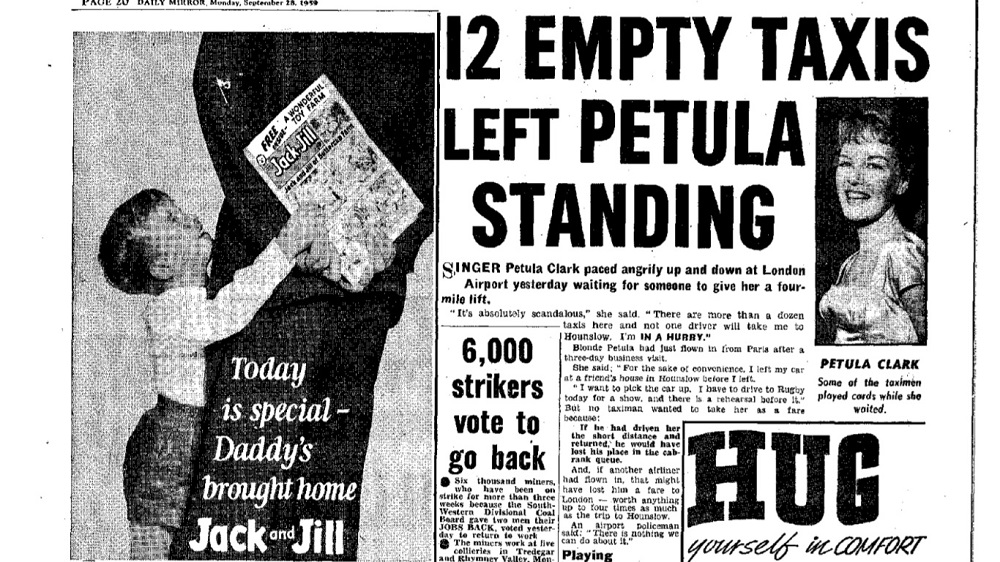 I keep my Petula Clark files in a remote secure storage facility. The perimeter fence is electrified, and patrolled by wolves. The wolves are not electrified, but I am working on it, in partnership with the animal behaviourist and amateur electrician Walter Mad. The wolves have been trained to become docile at my approach, but to attack savagely anybody else, including Walter Mad. The combination of fence and wolves and some fairly stout padlocks ensures that my Petula Clark files remain safe and secure.

It is fifty years since I began my collection. There was a brief report in the local newspaper of the seaside town in which I then lived, announcing a forthcoming concert by Petula Clark. I snipped it out of the paper with a pair of scissors and put it on my desk, under a seaside pebble. Over the following few months I snipped out of various papers several reports in which Petula Clark was mentioned. Some of these were illustrated with photographs of the chanteuse, though the photographs themselves were of low quality, as were most newspaper photographs in those days.

By the time I had accumulated five or six such snippages I lost all interest in Petula Clark. Looking back, it is fair to say that I was never particularly interested in her in the first place. I spent far more of my time, for example, thinking about and studying and even attempting to imitate the behaviour of wolves. Eventually, one blazing summer morn, I looked at the seaside pebble on my desk, and the five or six press clippings related to Petula Clark underneath it, and I resolved – with a sort of manly Jack Hawkins stern-jawed resolve – to find a more efficient storage method for them. After all, it had occurred to me more than once that, were I to move the seaside pebble for any reason, and my window was open, and a gust of wind blew in, billowing the curtains, the cuttings, all five or six of them, could be scattered, untidily, and – perhaps, perhaps – be lost forever.

Hence the files, by which I refer to buff cardboard folders. I bought a packet of these at a stationer’s. I distinctly recall that on my walk to and from the shop, which took about fifteen minutes each way, I did not see a single wolf. This saddened me, but I was consoled, on the way back, that I had acquired a suitable means of storage for my collection of five or six Petula Clark press clippings. I was so eager to return home and set to work that I did not, as I usually did, stop off at the ice cream kiosk to buy a choc ice, which I would then eat while sitting on a seaside bench and staring out to sea. Walter Mad has hatched a scheme to use half-eaten choc ices as bait in the process of electrifying wolves. I must admit I did not quite follow his reasoning, but I feel sure it is sound.

Once home, and having unwrapped from their cellophane the buff cardboard folders, I took five or six of them and placed a Petula Clark snippage into each one, having first, of course, moved the seaside pebble to one side on my desk. I considered marking the folders, for example by writing “Petula Clark Press Clipping No. 1” (and so on, up to No. 5 or No. 6) on the front of each one, but I decided against this. My decision was made the easier because, at the time, I recall I had mislaid my pencil, and I only discovered it some days later, tucked against the wainscot on the opposite side of the room. How it came to rest there I shall never know.

I placed the folders in one of the desk drawers, made a cup of tea, and settled back to gaze at a picture book of wolves I had borrowed from the seaside library. It was long overdue, but I was young and feckless and reckless, and I did not give a hoot.

Despite the fact that I no longer had any interest in Petula Clark, my collection was not yet complete. About three years later, riffling through a colour supplement, I came upon a quarter-page colour photograph of the star, and in a sudden frenzy, as if gripped by demons, I reached for my scissors and snipped it out. Fortunately, in spite of the passing of the years, I had the remainder of the buff cardboard folders close to hand. I took one, placed the colour photograph of Petula Clark inside it, and added it to the collection in the desk drawer. Outside, the sky had darkened, and I swore I could hear the distant howling of a wolf. At that time, I had not yet gained the acquaintance of Walter Mad, so I was not in a position to telephone him to confirm whether that was indeed what I heard.

Many more years passed before I decided to transfer the Petula Clark files from my desk drawer to a remote secure storage facility. The process was surprisingly straightforward, and was accomplished in a single afternoon, with the assistance of Walter Mad, who by this time had become my boon companion. In addition to being an animal behaviourist and an amateur electrician, he also owned a van, which he drove at terrifying speed while wearing a pair of goggles and some sort of home-made cobbled-together gutta percha breathing apparatus. Having secured the Petula Clark files deep in the bowels of the facility, we drove back via an ice cream kiosk and stopped to eat celebratory choc ices while staring out to sea.

I broke our contented silence by asking Walter Mad if wolves are able to swim.

“That very much depends on the wolf and the conditions in the sea,” he said.

“And Petula Clark,” I continued, “Can she swim?”

“I am no expert in Petula Clark matters,” he said, “But I expect she can, yes.”

That was precisely the answer I wanted to hear, though I could not think for the life of me why, as I had no great interest in Petula Clark, then or now.

We digested our choc ices – Walter Mad saving half of his, uneaten, for baiting experiments with wolves – and drove away from the kiosk, as the sun sank in the west, and waves crashed relentlessly against the pointy rocks.

2 thoughts on “The Petula Clark Files”