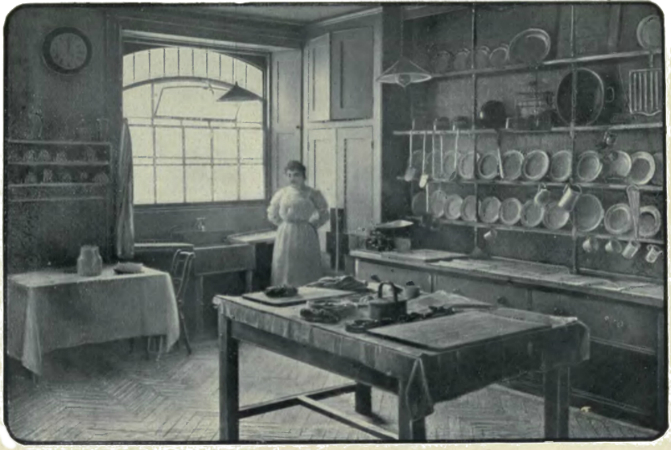 Nobody can prepare devilled kidneys better than the devil himself…

Greetings. My name is Beelzebub, and I am the devil incarnate. You may have seen pictures of me, colour plates in books or crude engravings in religious tracts, where I am often depicted with a goaty appearance, with horns and cloven hooves and a tail. The accompanying texts attribute to me all sorts of dark powers, and give the impression that I am to be feared more than anything else in the world. All I can say is that such powers, such fear, if real, would come in extremely handy in my current predicament. For the past six months I have been held captive in the basement of a bungalow, by a neurasthenic Victorian lady named Maud and her slovenly yet devoted maidservant, Baines.

The latter is my chief tormentor, for the length of chain which restrains me keeps me confined to the kitchen and the scullery and the pantry, where Baines rules the roost. When she is in particularly vindictive mood, Baines likes to poke me with burning hot toasting forks, cackling that she is giving me a taste of my own medicine. I have no idea what she is inferring, as I have never once in my life poked anybody with a burning hot toasting fork, oh, except for the occasional sinner, who richly deserved such hot poking on account of the crimes and naughtinesses and debaucheries and malfeasance they committed before they were delivered into my care. I, on the other hand, get poked with burning hot toasting forks purely for Baines’ amusement, which seems to turn the moral order on its head. But what can I do? I am enchained, below stairs, forced to work as a skivvy.

I suspect things would not be half so awful were this not a Victorian kitchen. The sheer amount of work involved in cooking and cleaning is exhausting even to think about. I have spent entire days scrubbing the grease from pots, using hard brown soap and soda and boiling water, and as soon as I am done Baines comes a-clattering with another load of caked and filthy kitchenware. Down here in the basement, there is no window to look out upon the world, and precious little ventilation, so the air is foul with fumes and smoke. Baines taunts me and says I must feel at home, but again, I have no idea what she is talking about. The infernal realm from which I hail is like a child’s playpen in comparison.

Things started out so well. On the way to my appointment with Maud, I stopped off in the little village of Porlock on the Somerset coast, where I poisoned a couple of wells, introduced an amusing new bacillus into the cows’ milk, and blasted an orchard with firebolts. At the inn where I stayed, I joined the other guests in rustic sing-songs and games of shove-ha’penny before casting them into the pit. It has slipped my mind, but I might even have poked one or two of the more inebriated peasants with a burning hot toasting fork, as Baines suggests. When dawn broke on the fateful day, I was feeling chipper, and tucked into a breakfast of offal and hot coals.

Transporting myself from the inn in Porlock to Maud’s doorstep in a single bound, with a thousand times the leaping power of Spring-heeled Jack, I hammered my fist on her door. When she opened it, I was struck by her fragility and neurasthenia and pallor, and I intuited that she had not long awoken from an opium daze occasioned by a goodly dose of laudanum. But of course I was far too polite to mention it, merely announcing that I was a person from Porlock, come on business, which was more or less the truth. Some might cavil that it would have been more honest to say I was Beelzebub, the devil incarnate, come to strike a bargain whereby Maud would sell me her soul in exchange for… well, for whatever it was she wanted in the mortal world. By the looks of her, she would probably have been happiest with oodles more laudanum. But long experience has taught me that, honest though such a direct approach may be, it is less than helpful when deployed with neurasthenic Victorian ladies prey to hysteria and attacks of the vapours. Much better to proceed gently, to inveigle one’s way into their parlour and accept refreshments in the form of tea and cucumber sandwiches, before addressing the main business. But I made the foolish, foolish mistake of taking off my Homburg hat, thus exposing the 666 tattooed on my scalp and the hint of devil’s horns.

Chained in the cellar, in the smoke, up to my elbows in grease and boiling water, awaiting the next poke from Baines’s burning hot toasting fork, I have replayed that parlour scene over and over again in my goaty head, as if it were a clip from a horror film. I should have kept the Tarot cards in my pocket and my Homburg on my head, at least until such time as the slovenly yet devoted maidservant had awoken from her own laudanum daze and served the tea and cucumber sandwiches. I should have used the time to lull Maud into my confidence, to gaze at her with my hypnotic goaty eyes, to compliment her on her Pre-Raphaelite tresses and the decor of her parlour, the showy napery, gleaming silver, glittering glass! In the centre of the table, in a vase that had a mirror for its base, white flowers always in bloom. Arranged around the edge of the mirror, in a clever contrivance that held water, was a border of blue or violet flowers. Tall, graceful jugs and goblets of Bohemian and Venetian glass held iced and plain water, lemonade, soda-water &c. Some oranges were in an old blue and white Delft dish to her right; on the left a glass dish held some olives. A silver toast-rack stood well filled before her. A tiny fountain played over some carefully picked watercresses, keeping them fresh. Raw and cooked fruits were arranged with an eye to colour in various old china dishes about the table. “Madam,” I should have said, “You must surely have attended carefully to The Modern Housewife or How We Live Now by Mrs Pender Cudlip (1883). I commend you.”

But, fool!, fool!, I revealed my devilry too soon, and was outwitted and bound in chains and, when Baines awoke, dragged down into the basement and enslaved as a skivvy. My only solace is that I have devised a plan of escape. Tomorrow, Baines has decreed that I shall cook breakfast. Nobody, she asserts, could better prepare devilled kidneys than the devil himself. I agree. And if I have my way, the kidneys are not the only things that will be devilled tomorrow morning.

One thought on “The Devil in the Kitchen”