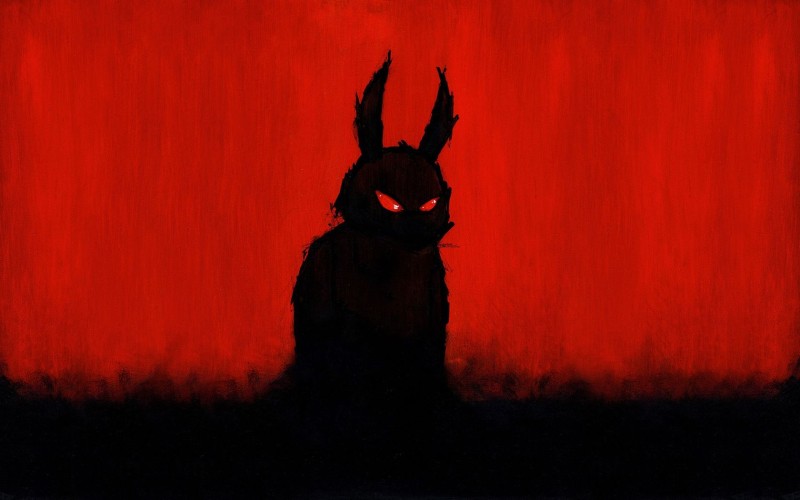 Once upon a time there were three little bunny rabbits. Their names were Flopsy, Mopsy, and Satan. Flopsy and Mopsy were completely normal bunny rabbits, but Satan, though to all outward appearances he too was a normal bunny rabbit, was in fact the devil incarnate, incarnate in the form of a bunny rabbit. Confident in his overwhelming power to wreak havoc and destruction upon the earth, Satan was playing a long game, biding his time, gambolling in the meadow with Flopsy and Mopsy and doing nothing to let slip his true identity.

It so happened that one day there came clopping by the meadow the itinerant Jesuit Father Ninian Tonguelash, astride his elegant horse. Now, wondrously, the disposition of the buttercups splattered across the meadow matched precisely the disposition of the stars in their constellations in the sky. It was as if the meadow was a mirror image of the night sky, or vice versa. I know nothing of astronomy, so cannot tell you which particular constellations were reproduced by buttercups on the sublunary sphere. But Father Ninian Tonguelash knew all about astronomy, for like all Jesuits he was an intellectual and knew everything there is to know about everything, everything, that is, except the ineffable mystery of Christ Our Lord, and even of that eternal enigma he knew more than most. So as he came clopping past the meadow he could not help but notice the remarkable disposition of the buttercups, and he tugged on the reins of his horse, brought it to a halt, and dismounted.

“Wait here a while, Keith,” he said, popping a sugarlump into the horse’s enormous mouth, “There is something I must investigate.”

Flopsy, Mopsy, and Satan, meanwhile, were gambolling about on the far side of the meadow, thoroughly engrossed in whatever unimaginable vacuity engrosses little bunny rabbits. This was true even of Satan, for he had “gone native”, as it were, while waiting for the time best suited to unleashing pandaemonium upon the world. Not one of the little bunny rabbits paid the least attention to the gaunt figure of Father Ninian Tonguelash, stalking across the meadow, sprinkling each individual buttercup with holy water for purposes only a Jesuit could understand.

But as he came closer, the very air shuddered. The Jesuit sensed the presence of evil, and Satan sensed the presence of rigorous intellectual Roman Catholicism. Father Ninian Tonguelash looked wildly about him, trying to pinpoint the source of all that was foul and unholy. But Satan knew his enemy immediately. He ceased to gambol, and fixed the Jesuit with a piercing gaze of unalloyed hatred. At this critical point, Flopsy’s and Mopsy’s gambollings were so frisky that they collided with the priest’s spindly legs and, in his valiant efforts not to stamp them underfoot, he toppled over.

And then there was a thunderclap. Sudden rain poured down in torrents. Keith the horse swallowed the last of his rapidly dissolving sugarlump. Flopsy and Mopsy gambolled away. And with his head resting on the grass, Father Ninian Tonguelash gazed into the eyes of Satan, and Satan gazed back.

Strange to think that this otherwise ordinary wet afternoon in March could have witnessed the most decisive event in human history. Armageddon could have begun, there and then, in a buttercup-splattered meadow. We do not know, we cannot guess, who would have emerged victorious. All we can say with certainty was that a psychopath-poacher arrived on the scene. From whence he came, we know not, and whither he went, only Keith the horse knows.

The psychopath-poacher levelled his shotgun. First he shot Satan. Then he shot father Ninian Tonguelash. Then he plucked a fistful of buttercups, and trudged across the meadow to where Keith waited patiently. He climbed into the saddle.

“Gee up!” he yelled, and off he galloped on Keith. He had buttercups for his lady-love. In this gorgeous, terrible world, even psychopath-poachers have devoted lady-loves.