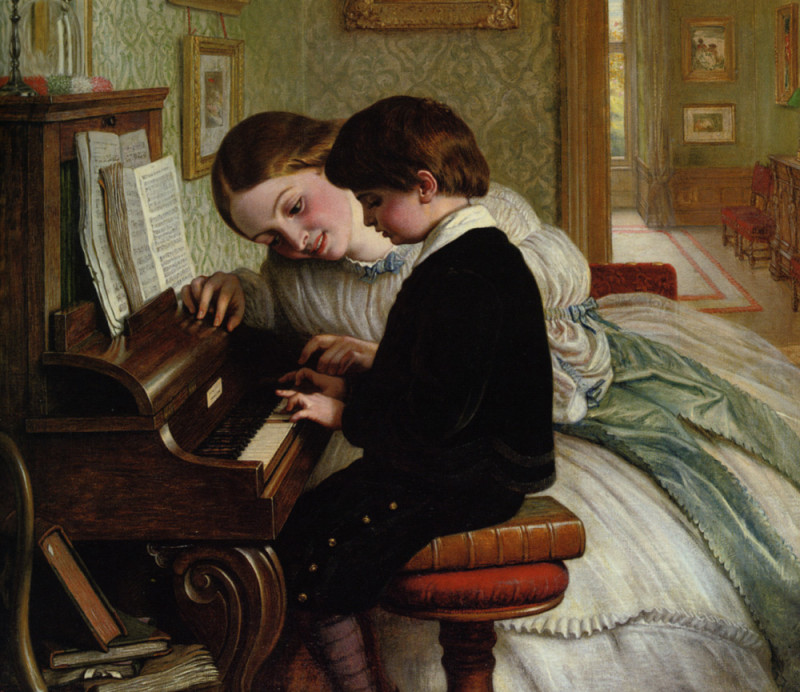 Today, a classic from the Frank Key oeuvre.  For more such uncategorisable fictive brilliance, you should buy the Dabbler Editions ebook By Aerostat to Hooting Yard: A Frank Key Reader…

My mother had a tin ear and a voice like a corncrake. In spite of these shortcomings, she saw it as her maternal duty to teach me a number of songs. I do not think she hoped that one day I might have bouquets thrown at me as I took a bow upon the opera house stage, it was merely that she felt the ability to sing songs was a necessary social accomplishment, like having good table manners or making small talk with riffraff.

It was on the day after my sixth birthday that Ma announced her intention. I was happily sprawled on the floor playing with a stick and a lump of coal when she swished into my nursery through the butchers’ drapes, grabbed me by the wrist, and hauled me off to what she henceforth called “the music room”. This was actually one of the pantries in which she had cleared space for her spinet.

She began, inappropriately, by teaching me the Four Last Songs of Richard Strauss. These were quite a challenge for a six-year-old who spoke no German and was accompanied, not by an orchestra, but by a cack-handedly tinkled spinet, and much aggression.

“For Christ’s sake, Arpad!”, Ma would shout, “Try harder or I will set the Grunty Man on you!”

The precise nature of the Grunty Man had never been explained to me, but, like all six-year-olds, I was terrified of him. Ma did let slip that his awful rages could be soothed by song, and I believed her. Indeed, I still do, so many years later. Ma has long been in her grave, and her little Arpad has grown old and frail, but I never crawl into my bed at night without putting out a saucer of suet and marzipan to placate the Grunty Man should he smash his way into my chalet as midnight strikes. When he removes the treats from the saucer, the pressure knob concealed beneath it will click up and activate a gramophone player, and the fearsome creature will be lulled by the dulcet tones of Dame Nellie Melba crackling from a 78.

When I had mastered the Four Last Songs to Ma’s satisfaction, we moved on to Dr Bogenbroom. This is a 1971 song by Jethro Tull, not one of their better-known pieces, and one which, curiously, I found far harder to learn than the Strauss. Much of the difficulty was due to the fact that Ma was now accompanying me on a wheezy and motheaten sackbut, an instrument with which she showed even less proficiency than the spinet. Our family factotum, Mungo, of Carpathian peasant stock, had grown fearful of the sound of the spinet after a series of nightmares, and had thrown it down a well. Ma resolved to change the locks on all the pantry doors, and to banish Mungo to the garden. He made himself a yurt as shelter against the snow, for this was a time of great howling blizzards. In the evenings, from my nursery window, I would hear Mungo singing away. He had a deep and booming voice and sang the Carpathian ditties remembered from his childhood, but Ma said they were abominations and nailed fast the shutters on my windows. Thereafter the silence was broken only by my own relentless practising, over and over again, of Dr Bogenbroom. It took me many months to crack it, but I did. As a reward, Ma gave me a new lump of coal to play with. The other one had crumbled, so I had been tapping my stick upon the floor, or upon the shell of Mungo’s tortoise.

I did not have much playtime, though, because Ma insisted I next learn Essay On Pigs by Hans Werner Henze. Difficult, brutal, and shouty, these five settings of the poem by Gastón Salvatore suited me perfectly, and in a matter of days I had them down pat. In fact I learned them before Mungo had finished repairing the spinet. Ma had pushed him down the well and made him fetch the various broken fragments, then locked him in a linen cupboard with a hammer and pliers and nails until he put the instrument back in one piece. She hated the sackbut, as did I, and we both looked forward to the day she could bash out her witlessly-arranged accompaniments upon the spinet once more. But Mungo was a slow worker, and almost a year passed before he was done. During this time, it was my job to feed his tortoise, and I became very familiar with curly kale and lettuce, to my immeasurable benefit in later life.

I fear I must pass in silence over the next stage in my song-singing education, for it is too painful to recollect. Ma somehow got it into her head to teach me Drink Ye Every One The Waters Of His Own Cistern, Until I Come And Take You Away, the single – and singular – song written by the out of print pamphleteer Dobson. I learned it. I sang it. I can still sing it. But it gives me no pleasure to do so, and it frightens even the crickets in my hearth. I will write about them separately, by the way.

Her spinet now restored, Ma’s pedagogic impulses were a-buzz. By the time St Bibblybibdib’s Day swung round, she had taught me Che gelida manina, Roll Along Covered Wagon, all one hundred and fourteen songs in the collection published by Charles Ives in 1922, and The Light Pours Out Of Me by Magazine. Keen as I was to crack right on, it was on the eve of my patron saint’s day that I was felled by an ague. I lost the use of my limbs, was rendered half-blind, and could only croak pitifully. Now, Ma had no truck with the medical profession, relying instead on Mungo’s befuddled and, I suspect, inaccurate memories of Carpathian peasant nostrums. Most if not all of these seemed to involve gunk and fluid drained from the gall bladder of his tortoise, and the chanting of gibberish at my bedside. I cannot say if, or how, it contributed to my recovery from the ague, but the chanting certainly had a profound effect on Ma. I have said she had a voice like a corncrake; now she began to behave like one. After listening, rapt, to Mungo, she would lollop off across the fields to the edge of Scroonhoonpooge farm, and hide in the wheat, gobbling down insects and seeds and shoots and frogs. As I got better, and my sight returned, I noted that when sitting at my bedside she was furiously knitting herself a pair of woollen wings.

By the time of my seventh birthday I was fit as a fiddle. I jumped out of bed and scampered to the pantry, keen to begin work on The Song Of Investment Capital Overseas by the Art Bears and More Than A Feeling by Boston. Ma had given me to understand that these two songs would complete my repertoire, and with them under my belt I would never be at a loss to entertain sophisticated people at cocktail parties for the rest of my life. But when I pushed open the pantry door I was met with a sight so traumatic that it meant I would never become the sort of person, with easy manners and social dash, who receives invitations to cocktail parties. Mungo was keening his deafening Carpathian peasant chant, and applying a poultice made from his tortoise’s gall bladder goo to Ma, who was encased from head to toe in a corncrake suit made of wool. She, in her turn, was calling “crex! crex! crex!” over and over again. Of the spinet, there was no sign.

I never did learn to sing those two songs. Over the following year, Ma tried all in her power to turn me into a corncrake chick. I was forbidden to sing anything at all, even the Essay On Pigs, my stick and my lump of coal were cast into a dustbin, and my time was split between hiding in the wheat and being chanted at by Mungo in the pantry.

God knows what would have happened had fate not intervened. Shortly before my eighth birthday, Mungo was called up by the Carpathian peasant army reserve, and returned to his homeland. We waved him off from the station. He left his tortoise with me for safekeeping. It lives with me still, and I feed it on curly kale and lettuce, but I have never drained a drop of fluid from its gall bladder. Ma eventually came to her senses and shed her corncrake ways, but she never taught me any more songs.