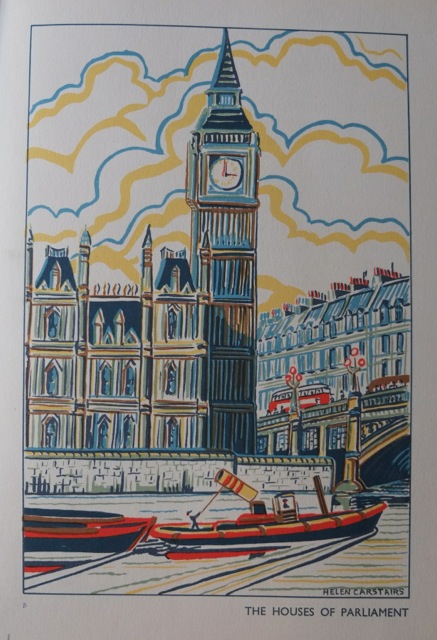 Author and architecture expert Philip Wilkinson of the English Buildings Blog begins the first in a new mini series, exploring the lives and works of some mid-century illustrators who seem to have slipped unjustly from view. We begin with children’s author Helen Carstairs…

The phone rings. It is the Resident Wise Woman, calling me from a charity shop to ask about a

book she has spotted. The line is terrible and our call is cut short, and cut short again when she

calls back, but she wants to know if we have Looking Round London by Helen Carstairs. We do

not. A while later she returns, clutching the most delightful children’s book I’ve seen in a long time,

and one, what’s more, that I didn’t know existed. I am more and more fascinated as I turn the pages. 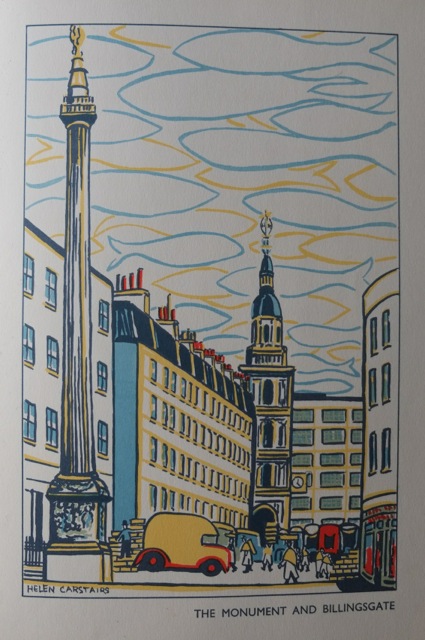 Looking Round London bears no date of publication, but internal evidence suggests that it came

out in around 1938. It contains 22 full-page illustrations depicting the ‘sights’ of London – the great

and so on. Most of them are brightly coloured and packed with human activity – people feeding the

There’s a lovely, free colourful line that sometimes seems to have a touch of Lowry, sometimes

even of Matisse. And there’s a bit of whimsy, too, not overdone but very much there, in the form of

beach that there used to be by the river. The figures, the colourful trees, the wavy lines in the sky

and on the river are all aspects of it that catch my eye. But most of all I’m affected by what’s behind

this sunny illustration – that it catches a London that, already, as the presses were rolling, had the

clouds of a gathering storm approaching it, and that, in a few years more, would be blitzed. 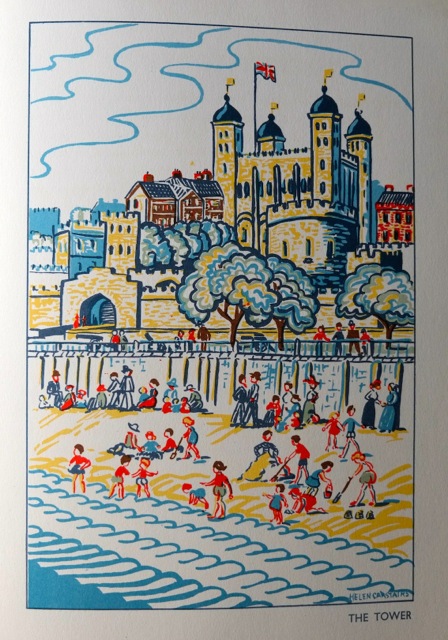 I get the same feeling from Helen Carstairs’ illustration of St James’s Park, with Buckingham

Palace in the background and pelicans at the front. The trees, bustling people, and those

characterful pelicans make for an engaging image, and I especially like the details caught in a few

strokes – those old-fashioned perambulators and the Royal Standard flying above the palace. 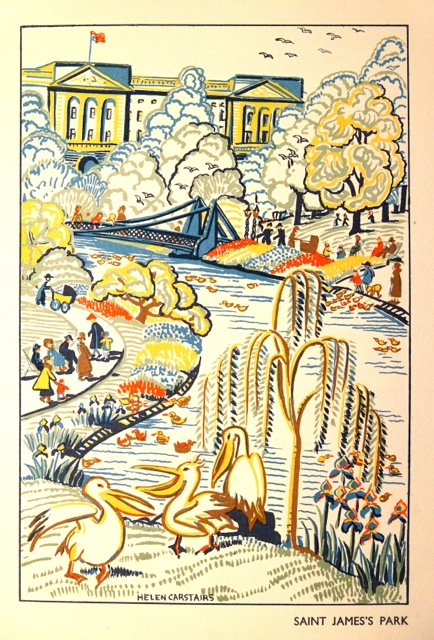 St James’s Palace is less well known but even more vivid in the Carstairs version. The building’s

bricks are a vibrant red; the brickwork is depicted as a stylised grid – unrealistic but effective, and

one of the features of these pictures that reminds me of needlework. Still brighter are some of the

coats on the figures in the foreground, figures, again, that are delineated, hats and all, with just a

few brushstrokes. The Monument and Billingsgate, and the Houses of Parliament, are just as

engaging and lively, what with the boat lowering its funnel to pass under Westminster Bridge and

the Billingsgate porters and vans – not to mention the appropriately fishy sky.

It’s so moving, this sunny pre-war book, in which so many people have time for leisure and the

freedom to enjoy the outdoor city. Its illustrations truly come to us from another age. There’s

another way in which this book seems distant from us. We know (or I know, at any rate) virtually

nothing about its author-illustrator. Who was Helen Carstairs? Reference books and the internet tell

us very little: that she was around in c. 1938 and published Looking Round London. No other

books seem to be credited to her. Yet she was on to something with her winning illustrations. Did

she give up and do something else? Did she survive the war? Does anyone know more?