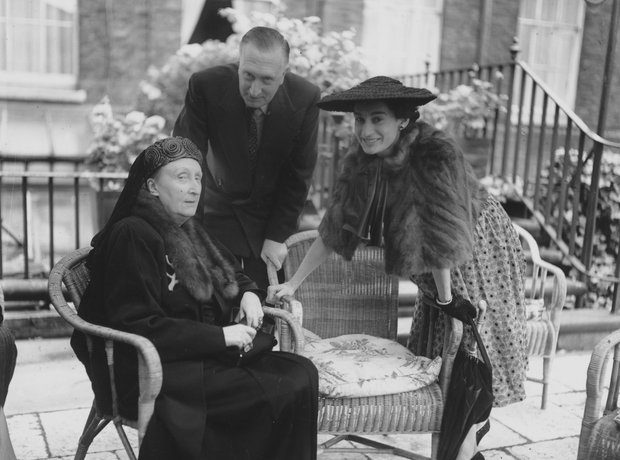 Walton with his wife Susana and Edith Sitwell (sitting)

Willie Walton may have been slothful, diffident and a womaniser – but, as Mahlerman reveals, ‘melody poured out of him’…

Regular readers of Lazy Sunday (I probably have at least three) may remember that in a recent survey of the life of Sergei Prokofiev, an unavoidable conclusion was established: that he was unquestionably a composer and orchestrator of genius, but also a thoroughly second-rate human being, especially if you happened to be married to him.

Much the same could be said, I feel, for Oldham’s (Sir) William Walton, though with slightly less vehemence. His great friend and collaborator Laurence Olivier described his exterior and personality thus:

Others, even close friends, noted his diffidence and sloth (he described himself as lazy), and it is true that he was certainly not a prolific creative artist. But genius comes in many shapes and sizes, and behind the timidity and reserve there lay a will of iron, and a certain versatility which, combined with fastidious musicianship, enabled him to triumph in genres as widely opposed as film music and the string quartet.

He was also, for a practically self-taught composer, a lucky man. Lucky that his father spotted an advertisement for a position in the choir of Christ Church, Oxford; lucky that he was accepted, on a fairly slim vocal talent; lucky that with the position came a scholarship to the Cathedral School; lucky that the music staff at Oxford were free spirits, and did not discourage individuality; lucky that his guardian, the Dean of Christ Church, Dr Thomas Banks Strong, took over the financial responsibilities of his pupil when his family became unable to meet the costs (The Great War had begun).

But Walton’s greatest piece of good fortune was a meeting, through the poet Siegfried Sassoon, with the family that would shape his early career as a musician, the extraordinary Sitwells, Edith and her two brothers Osbert and Sacheverell, whose rather vague raisons d’être was to find gifted artists without means, and provide the patronage that would allow their genius to flower – think Simon Cowell, but in reverse.

With Cowell there is no patronage. 200,000 wannabes with little or no musical ability are whittled-down to 16 of the least-awful, and from this pool of mediocrity emerges, at about the same time as Santa from the fireplace, a pubescent teenager (perhaps several of them) who will make a Christmas Number One and, with luck and a fair wind, never be heard from again. Cowell, in the meantime will buy another boat a little bigger than the last one, this time fitted out with the walk-in bath and stair-lift that he will soon need. But where was I? Oh yes, the Sitwells.

The Sitwells – in effect, ‘adopted’ Walton – or ‘Willie’, as he was known to most of his friends. Quite why these sophisticated aristocrats found this callow Lancastrian so appealing is hard to judge, but by the time he was eighteen, in 1920, he was living in his own room in their Chelsea house, with a stipend of some £250 a year, and rubbing shoulders with the likes of Serge Diaghilev, Ferruccio Busoni and Igor Stravinsky. His amazing good fortune was acknowledged later in life when looking back on his time in London: ‘If it hadn’t been for them, I’d either have ended-up like Stanford, or would have been a clerk in some Midlands bank’.

At around this period Edith Sitwell began to publish some of the Facade poems, and a couple of years later Walton added a sextet accompaniment (and later still an orchestral one) and they became Facade – An Entertainment. The model is clearly Schoenberg’s quirky masterpiece Pierrot Lunaire, but the result in no way resembles it, the poems being satirical and picturesque in intention, the music using all manner of pastiche to comic and, at times, beautiful effect. From the Facade Suite No 2, here is the orchestral version of Popular Song, given a little extra buzz by Stan and Ollie in their 1949 classic, Way Out West.

Walton was barely out of his teens when Facade made his name, almost overnight, but after a few more years of study and composition, he left behind the satirical gaiety of his youth with his Viola Concerto (1930), a piece that many consider to be Walton’s most beautiful creation it is, perhaps, the greatest of all viola concerti, and with it he established, beyond doubt, that he was fit to occupy a position between Vaughn Williams and Benjamin Britten. The outer movements are shot-through with romantic melancholy, and they embrace a central jazzy scherzo, typically full of aggressive high spirits. Here, the elegiac first movement Andante comodo, played by the young New York violist Marc Sabbah.

Written to a commission from the BBC for the up-coming coronation of Edward VIII, the march Crown Imperial was only part written in 1936 when the weakness of ‘little Eddy’ was exposed as he renounced the throne to marry ‘that woman’, the American Wallace Simpson. His brother George stepped forward somewhat reluctantly, and on May 12th 1937 the premiere of this marvellous piece took place in Westminster Abbey. It is set in two contrasting sections, both of which are repeated – and the majestic, sweeping ‘big tune’ is one that Elgar himself would have been proud of.

It is oft’ forgotten that Walton was one of the great tunesmiths of his time – melody poured out of him. And if anybody had any doubts about this, I would suggest an investment of two minutes listening to this touching, yet somehow profound piece from the orchestral arrangement of ‘Touch her soft lips, and part’ from the 1944 music he composed for Olivier’s Henry V. We see the wayward ruffian Pistol bid goodbye to his sweetheart as he heads for France – close your eyes and you can still see him, and is that a tear on your cheek?

Walton was the funeral side of 60 when he produced a set of miniatures for solo guitar that have become a cornerstone of the slim repertoire for that instrument – they are, in short, minor masterpieces. They were dedicated to his friend, the composer Malcolm Arnold, and written for the great Londoner Julian Bream, happily still with us. From the set of five, Bream plays the Lento Sognando, number two, in front of the composer (eventually), relaxing in his home on the island of Ischia with a glass of wine; musical magic, I’m sure Dabblers will agree.

Time and space constraints have meant that large parts of Walton’s life, and music, have had to be edited out of this brief survey. Justifying the slanderous link with Prokofiev, I would simply say that in 1920’s London when the composer was also in his twenties, it was pretty obvious that no woman was completely safe when the mood was upon him, nor were they treated particularly well when his ardour had cooled. He married the Argentine Susana Gil Passo in 1948, and although the union lasted until his death in 1983, their early years together were disfigured by a string of affaires de coeur to which Susana chose to turn a blind eye. As far as the music is concerned there is plenty missing here that should have been included; the epic tour de force that is Belshazzar’s Feast, when adequately performed, can be overwhelmingly exciting; the violin concerto, another masterpiece, and the B flat minor First Symphony could be the greatest first symphony by anybody – save perhaps the last movement. Part two next year?