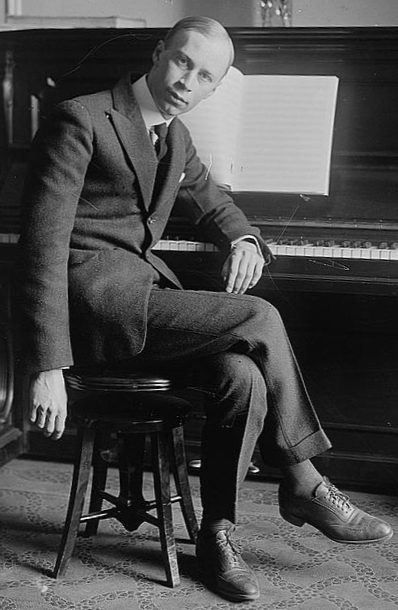 Sergei Prokofiev may have been a second-rate human being, but he was also a genius, argues Mahlerman…

Call me old-fashioned, but my broad touchstone for genius is that a man (it is almost always a man) elevated to such a station in life should, at the very least have spent five years standing, with his head inclined at forty-five degrees, painting the ceiling of a church: or be possessed of a multitude of artistic, scientific and engineering skills to a level where only the term Renaissance Man will properly describe him: or, more mysteriously, he might be fourteen years old, and hearing a complex piece of music for the first time and, returning to his boarding house, be able to inscribe the whole of it perfectly, from memory.

A few days ago my son called me from his room. His team had scored four goals and the game was only twenty minutes old. I stayed to watch the rest of it, and toward the end one of the commentators, one Michael Owen, expressed his opinion that a certain Luis Suarez was a genius, this after Suarez, advancing on goal with the ball at his feet had, instead of passing to one of his better placed team-mates, just swung a leg at the ball, which would have entered the top corner of the net but for the anticipation and athleticism of the man (quite possibly another genius) charged with keeping it out. The Uruguayan seemed to spend quite a lot of the rest of the match pretending to fall over theatrically, writhing in what appeared to be his death-throes and, a few moments later, rejoining the game, seemingly in perfect health. His employers pay him twelve-hundred pounds an hour for these antics, even when he is asleep. Now, far be it for me to cross swords with little Michael but surely, to qualify for this moniker you need something more than the ability to control a 15oz inflated sphere, with a bit of amateur dramatics on the side? Or am I impossibly behind the current zeitgeist?

The Russian Sergei Prokofiev had, I think, ‘something more’ – and listening to the fizzing last movement of his parodic, neo-classical Symphony No 1 in D major (Classical) who will step forward and say that this is not a work of genius? The conductor is the ‘Rasputin’ of the podium, Valery Gergiev.

Obdurate, boorish, saturnine, ill-mannered….these words describe Sergei Sergeyevich as a hand fits inside a glove. He was also a very strange looking man, dubbed a ‘White Negro’ with thick Mick Jagger lips set on a small blond-haired head, atop a thin scrawny neck. He was tall and skinny with long, awkwardly dangling arms (see above) terminating in powerful, muscular hands. His skin was pale and pink until he became inflamed, which was often; it would then turn bright red.

So, let us say that looking into the shaving-mirror was, to the composer-pianist an act of torture. But what he also possessed was an unshakeable belief in his own powers as keyboard executant and a composer of merit, perhaps genius – and he would tip-the-hat to no man. A clue to his manner, at least in the early years, is illustrated in some of his titles: Sarcasms Opus 17 (1912 – 14) : Suggestion diabolique (1909) : or how about this from 1908, the last movement from his Four Pieces for Piano, Opus 4, the piece marked Prestissimo (roughly, as fast as you can)fantastico. Playing of frightening, almost superhuman power from perhaps the greatest player of the last century (certainly in this repertoire), Sviatoslav Richter, the audience appearing to be stunned at the end.

In an age (the 20’s) when the enervated, lymphatic world of Chopin, Debussy and Scriabin held sway, this percussive, unrelenting muscularity was a fascinating foil, and arriving in America Prokofiev was greeted by astonished excitement. But it would be fair to note that his own music was liked, not loved, even when he began to move away from spiky barbarism and antiromanticism toward a more lyrical, melodic form. Leaving America he set-up in Paris, probably imagining that with the explosion of Stravinsky’s Sacre and Petrushka a decade earlier, that Paris would be softened-up, and ready to embrace his talent. And so, up to a point, it proved to be. Never capable, nor desirous of profundity, he nevertheless became one of the most gifted melodists of the 20th Century. He composed the music for the film Lieutenant Kije in 1933 and extracted a marvellous suite Opus 60 from it. Tunes lively and serene fall over themselves in this wonderful work, and the famous Troika movement has been ‘borrowed’ by many pop-lowlifes (U2 and Sting spring to mind) and film producers to add a ‘Christmassy’ feel to their pallid efforts. Here, in the second movement Romance, the fictional Lieutenant falls in love. Note the wonderful orchestration with, unusually, tenor saxophone and a tinkling celeste. The Armenian band are a bit ropey and uneven, but they seem to have an instinctive feel for this music.

In 1932 Prokofiev returned to Russia and stayed – and until 1937 he was allowed to travel abroad on concert tours. He had married Lina when she became pregnant in 1923, but his behaviour towards his wife was just as dreadful as his brutish contact with almost everybody else. He had a number of affairs, which Lina stoically tolerated, but he treated her at best with indifference, and by the late 1920’s his musical star was beginning to fade. His collaborator Diaghilev had died, and the popularity of his two main rivals Stravinsky and Rachmaninov was in an ascending plane. And even when the official Soviet persecution of his great near-contemporary Shostakovitch began in 1936, the composer’s continuing arrogance led him to believe that he alone would be untouched by the Great Terror that Stalin was unleashing. In this he was mistaken. Returning to Russia from a truncated tour of America with Lina, he decided to leave her and the children, setting-up home with 23 year old Mira Mendelson, who was half his age. He remained a Soviet hero throughout the war but suddenly, in 1948, Stalin and Soviet bureaucracy decreed that most of his work be banned and he became, in effect, a non-person. His union with Lina, by extention, became a non-marriage, leaving him free to marry Mira. This left Lina without any protection from the composer or the State and she was soon arrested on trumped-up charges of ‘espionage’, tortured and interrogated for a year, put on trial, and sentenced to 20 years in the Gulag, eight of which she served. Sergei Prokofiev’s wish for the last twenty years of his life was to outlive Stalin, but it was not to be. The composer died 50 minutes before losif Vissarionovich on March 5th 1953.

That Prokofiev was a composer of genius there seems little doubt, but he was a second-rate human being. For at least half of his life, plus the sixty years since his death, his important works have retained their popularity in the West and elsewhere; a week hardly passes in London where you cannot hear one of the symphonies, concertos, or perhaps the great ballet Romeo & Juliet. His music has been called ‘heartless’, and considering the bare bones of his life and the way he conducted it, perhaps we shouldn’t be too surprised at this. It has also been called ‘filmic’, but again, when we consider the often bright, technicolor soundworld he created, it doesn’t seem quite so impertinent to call it such.

In 1937/8 the Russian film director Sergei Eisenstein found an ideal collaborator in Prokofiev when he was casting around for a composer to work on his great allegorical film Alexander Nevsky. The film was a huge success, and remains one of the classics of the cinema. The composer later reworked the material into a concert cantata, which has had a similarly brilliant history. It is usually performed in seven sections, the fifth being the famous Battle on the Ice. After the slaughter, it is followed by the surpassing beauty of The Field of the Dead, where a young girl wanders through the carnage looking for her lover, and kissing the eyelids of the dead. The film soundtrack is too poor to offer any serious listening pleasure, but I found this rather wonderful concert version by the Georgian Mezzo Ketevan Kemoklidze, wandering through the orchestra as if across the ice-flow and then delivering what I can only call an idelible performance of the bleak but beautiful solo part before continuing her journey.