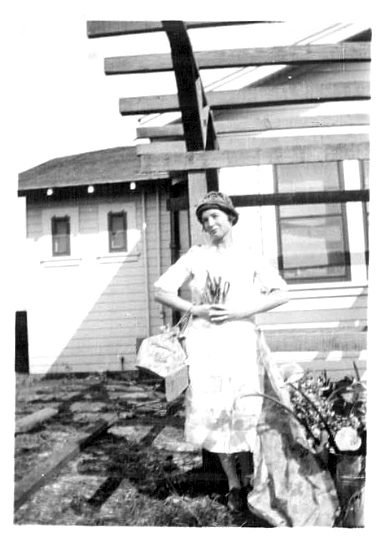 Mary Irene and I used to hunt snakes in the fields behind her house. By July the mustard flowers and tumbleweeds had dried up and blown away to uncover the little holes where I imagined that snakes plotted and hid. Playing the chivalrous protector, I would lead her by the hand through the field, poking a stick to right and left as we went. Once or twice I upset a harmless garter snake but never proved myself lethal.

Mary Irene Hart was my great-grandmother. For some reason I called her Nanny. She didn’t care for the nickname (she was no goat, she liked to say), but she put up with it. She was born in Colorado and had three sisters. Their father abandoned them early on to go north (to Canada? Alaska?) and chase after gold. Their mother raised them alone after that. They all worked and struggled but were happy enough. The girls liked to pretend that they were the March sisters from Little Women. Mary Irene was indisputably Jo. She was funny and curious, a bit of a ham and a tomboy. She got herself into trouble.

There are photos of her from the 1920s with a flapper haircut, wearing dresses and sweaters and hats by turns fashionable or frumpy. She’s laughing, pointing, squatting at a picnic, hiking in the Rockies, posing with an infant on her hip and a cigarette in her hand. She surprised everyone (or no one) by getting pregnant out of wedlock. She married my great-grandfather Small in a hurry and they moved to New Mexico where the baby was born – a boy. But she didn’t know how to care for him, and they were miserably poor. Her mother had to come from Colorado to rescue them.

The little boy grew up to rescue her too.  At some point, Mary Irene and her family moved to California, near San Francisco. Eventually her sisters and mother came. By now there were three children, my great-uncle Sonny, my great-aunt Marty, and my grandmother Barbara. Great-grandpa Small was a drunk and had favorites: he fawned over Barbara and blamed Marty for not being as pretty and compliant as her sister. He sometimes beat Mary Irene. One day he had knocked her down in an alcoholic rage when Sonny (by then a young man) charged at his father with a bat and told him to leave the house. He did, and he never came back.

After her children were grown and starting their own families, Mary Irene fell in love with a red-haired widower with the last name of Bennett. They had been good friends for years and it seemed meant to be. They married and were happy for a while, but after five or six years he ran off with another woman. She kept his last name the rest of her life.

My mother often took us to see Nanny when I was a boy. She lived alone in Antioch, below the grassy foothills of Mt Diablo, where the inland rivers are sifted through the delta on their way to San Francisco Bay and the Pacific. In front of her house was a lattice made of cinder blocks with the shapes of flowers carved out of them. Nanny herself was thin and wrinkled; she’d been a smoker all her life. When she opened the door a soft odor of cigarettes and perfume poured out. The living room was cool and an amber glow came through the curtains. Pictures hung on wood-paneled walls; there was a ticking clock, a television, a couch, framed portraits and ashtrays on side tables, and a china cabinet full of glass and porcelain figurines.

Nanny would take us out for shopping and lunch. She drove a ‘60s model Oldsmobile or Buick. I was crazy about that car – its white-walled tires, its flaring terminals over the tail-lights and its wide chrome grille. Bouncing on the vinyl backseat (without a belt, of course) I could sense the car’s mass and torque and felt like an astronaut floating free in the belly of a rocketship.

One year for Christmas or my birthday Nanny gave me a hardbound Companion Library edition of Mark Twain: Tom Sawyer on one side, Huckleberry Finn on the other. Of all the books I’ve lost track of down the years, I think I miss that one most.

There was a conversation that Nanny and I rehearsed almost every visit, another ritual like the snake hunt. It took place on the couch in the living room when the TV was turned off. Mary Irene would smoke elegantly and I would watch spellbound. “Nanny,” I would say, “where does the smoke go?” Then she would answer, “It follows beauty,” and trace the curling ghostly line through the air.  She’d end by pointing at me, pressing her finger to my lips.

No long ago my mother gave me some of Nanny’s china and a photograph of her as a young woman. It’s strange to see people frozen in the blush of youth whom we knew only in their later years. On the one hand, we’re disturbed: time’s toll is made plain. But then we’re consoled too: our memory of the person is somehow expanded, the portrait brightened a little. Looking at this picture I want to believe that there’s some corner of time where Mary Irene still stands outside by the garden with her funny pose and grin. In her eyes there is only – what? Laughter perhaps. There’s no mention of the burden of living, the trials of marriage and children, the expectation or memory of loss or pain; no rumor at all of the snakes that hide in the fields and aim for our ankles.

Those snakes got her eventually, despite all the protection my boy’s heart could offer. It happened when I was eleven. There was a stroke, paralysis, a hospital stay, another stroke, and she was gone. I had never lost someone close to me before. My mother called me in from play to tell  me the news. I shut myself in the bathroom with the lights off and cried. I fought hard not to understand it. How could she be so totally lost to us and yet so palpably near at that moment? It was as if she had turned a corner only a second before and I might still touch her arm if I reached round fast enough. Where had she gone? Maybe she had followed beauty too.