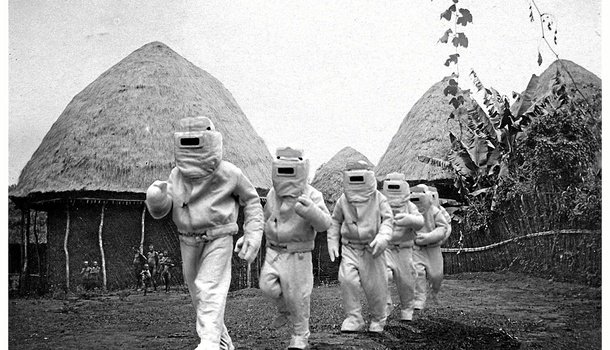 What if Africa had sent the first humans into space? To Infinity and beyond, as we head out into the weirder parts of the Wikipedia universe with the Wikiworm…

Edward Festus Makuka Nkoloso was a resident of Zambia who joined the British forces in World War II, and served as a sergeant in the signal corps. After the war, he became translator for the Northern Rhodesian government. He was also a grade school teacher, and opened a new school, which was purportedly shut down by British authorities. He then joined the resistance movement.  He was arrested and imprisoned in 1956 and 1957. Following his release, he was appointed as security official of United National Independence Party. In 1960, he founded the Zambia National Academy of Science, Space Research and Philosophy.

From 1960 until sometime after 1969, this program sought to accomplish the launching of a rocket that would send one 17 year old girl and two cats to the moon. There were also plans for a trip to Mars. Nkoloso hoped to beat the United States and Soviet Union’s respective space programs at the height of the Space Race.

To train the astronauts, Nkoloso set up a makeshift facility on an abandoned farm seven miles from Lusaka where the trainees would be rolled down a rough hill in a 44 gallon oil drum. This, according to Nkoloso, would train the men in the feeling of weightlessness in both space travel and re-entry. In addition, they used a tire-swing to simulate weightlessness.

Nkoloso stated goals of the program were to establish a Christian ministry to “primitive” Martians, and the hope of Zambia becoming the “controllers of the Seventh Heaven of Interstellar space”. However, he reportedly instructed the missionary in the space program not to force Christianity onto the native Martian inhabitants.

The rocket, named D-Kalu 1, was a 10-foot x 6-foot drum-shaped vessel. Named after the first president, Kenneth David Kaunda, he claimed it was made of aluminium and copper, and space worthy. The planned launch date was on 24 October 1964, Independence Day, and would take place from the Independence Stadium, but was purportedly denied permission due to being inappropriate.

It is said that he then asked UNESCO for a grant of £7,000,000 in Zambian pounds to support his space program. It is also said he requested $1.9 billion from “private foreign sources”. However, the Ministry of Power, Transport and Communication is reported as stating those requests had not been made on the behalf of Zambia.

The term “Afronauts”, coined by Nkoloso, refers to the participants of this program.

Nkoloso stated the program failed due to lack of funds, the pregnancy of astronaut Matha Mwambwa and her subsequently leaving the program to return to her parents, and problems with morale due to media attention. The rocket was claimed to have been sabotaged “by foreign elements”. The Zambian government distanced itself from Nkoloso’s endeavour.

He received a law degree from the University of Zambia in 1983. He was awarded the Russian Jubilee Medal “Forty Years of Victory in the Great Patriotic War 1941–1945”. He also served as president of the Ndola Ex-servicemen’s Association and made an honorary army colonel. He died on 4 March 1989, and was buried with full presidential honours.