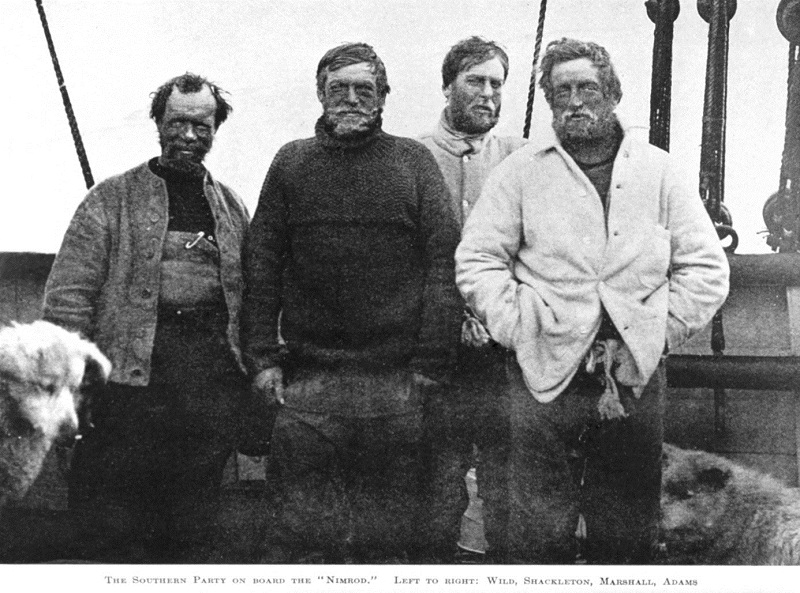 It has long been believed that Ernest Shackleton’s glimpses of an ‘extra man’ on his Antarctic expedition were exhausted hallucinations. But Frank has discovered important new evidence showing that he may have been right all along…

Who is the third who always walks beside you?
When I count, there are only you and I together
But when I look ahead up the white road
There is always another one walking beside you.

T. S. Eliot’s note on these lines from The Waste Land explains that they “were stimulated by the account of one of the Antarctic expeditions . . . that the party of explorers, at the extremity of their strength, had the constant delusion that there was one more member than could actually be counted”.

The account was by Ernest Shackleton, of the Imperial Trans-Antarctic Expedition of 1914–17. The explorer was reluctant to speak of the extra man, who, “during that long and racking march of thirty-six hours over the unnamed mountains and glaciers of South Georgia, it seemed to me” joined him and his companions. It has long been believed that he – it? – was an incorporeal being, a spirit guide, summoned by Shackleton’s brain through “monotony, darkness, barren landscapes, isolation, cold, injury, dehydration, hunger, fatigue and fear”, as Michael Shermer put it in an article in the Scientific American. A similar delusion is said to have affected others, including the transatlantic pilot and accidental baby-killer* Charles Lindbergh, who sensed the presence of a ghostly co-pilot on his solo flight.

A recent discovery by boffins in Antarctica, however, suggests that there actually was an extra man with Shackleton’s party. A manuscript, entitled I Was Shackleton’s Extra Man, was found encased in ice on a stray floe somewhere between South Georgia and the Antarctic ice-mass. It was so well preserved that, when thawed out, the ink was still not dry. Unfortunately, slapdash handling by an over-eager boffin resulted in smudging, rendering parts of the text illegible. What follows are passages from this historic document.

Good evening. My name is [smudged]. You do not know me. You have never known me. You will never know me. But if ever you trek with sledge and husky across the great ice continent of the south, you might see me. There! That is me, up ahead of the rest of the group, trudging through the snow. That is me, lolling behind, never quite catching up with the main party. That is me, over to the side, left or right, just out of earshot. I am always with you but never quite with you. But I am no figment. I am all too real.

I first arrived in Antarctica in [smudged], the first man ever to set foot here. I was here before Scott, before Amundsen, before Arthur Gordon Pym of Nantucket. I was here when the world was young. I cannot remember quite how I found myself here. One minute I was lounging in a hammock in the daffodil-strewn garden of [smudged], then I was out at sea on some kind of raft, and it was cold, and I shivered, and everything was white, the sky and the sea and the ice.

I made landfall. The raft was crushed by pack ice. I headed for the interior, but soon enough I was walking around in circles, my mind both numbed and unhinged by monotony, darkness, the barren landscape, isolation, cold, injury, dehydration, hunger, fatigue and fear. I would have gone to pieces, but at the end of my tether I was befriended by penguins, who took me to their colony and nursed me back to health on a diet of fish and algae and a rigorous exercise regime of swimming and flapping my arms and legs.

The years passed in a white ice haze, and I was content. But one day I woke up and I was filled with a hankering for home. I longed for the daffodil-strewn garden, the hammock, and suddenly memories came flooding back, of [smudged] and Captain Nitty and the betting shop and [smudged] and the riotous parties up at the Big House and crates of negus and [smudged] and bouquets of enormous genetically modified crocuses. I had to return. With tears in my eyes, tears which turned instantly to icicles, I bid farewell to my penguin friends and trudged away across the ice and snow.

It was weeks later when I came across a group of explorers. I was no longer used to the company of men, so while I shadowed them I kept my distance, always enough distance to avoid having to speak, to explain myself, to tell my story. What was there to tell? Nothing of note ever happens here. Time stops. I had no idea how many years had passed, seven or seventy or seven hundred.

When the explorers were asleep in their tents, I crept closer and went rummaging in the stores lashed to their sledges, the cases packed with monogrammed silver cutlery, backgammon boards, cigar cases, clothes brushes, tins of button polish, and copies of The Vicar Of Wakefield. I confess I helped myself to certain items, but never stole anything important.

And then one day I went a bit too far ahead, or fell too far behind, I cannot remember which, and the explorers vanished in the mist, and I never saw them again.

But luckily this was the golden age of polar exploration, and soon enough there was another raggle-taggle band of doughty chaps struggling with sledges and huskies across the ice. I joined them, too, in my just-out-of-reach way, hoping if I followed them we would arrive back at their ship, and I could stow away upon it, and return at last to [smudged] and daffodils.

Yet so incompetent were all these chaps that I ended up as I had begun, going round and round in hopeless circles. I am still here, lost in the ice, hankering for home, salty icicles dripping down my cheeks.

Tomorrow I shall get a gun and shoot an albatross.

* NOTE : See Crime Of The Century : The Lindbergh Kidnapping Hoax by Gregory Ahlgren and Stephen Monier (1993)