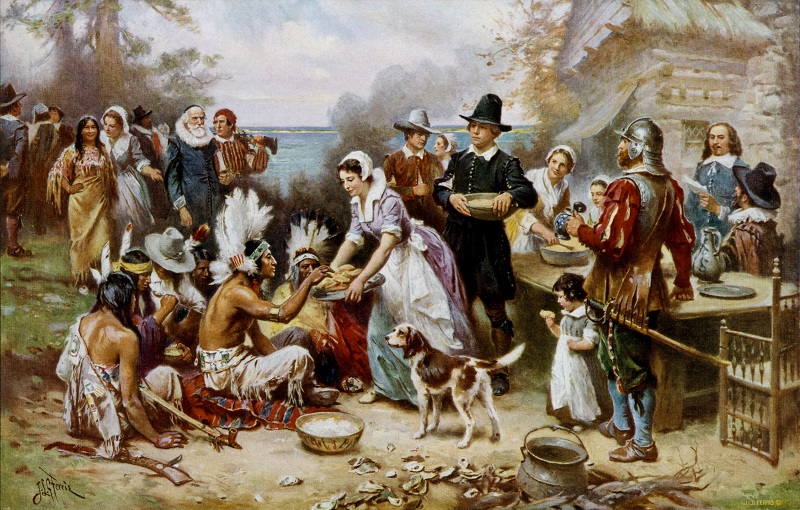 Ever wondered why Americans have an enormous family turkey dinner just before having to do it all over again a few weeks later?

Author and historian Peter Firstbrook explains Thanksgiving for a British audience, including why it’s so close to Christmas…

Today, millions of families throughout the United States will sit down to enjoy a Thanksgiving meal together. It is second only to Christmas as the most important family event of the year.

Thanksgiving means over-indulgence on a continental scale, with cholesterol levels going through the ceiling. It has become a tradition which runs through the very DNA of the American people, not to mention their blood lipids.

But how did it all begin?

Strangely, for a country which claims their history only started in 1492, Americans have their tradition of Thanksgiving wrong. (Actually 1492 is wrong too, because the Spanish didn’t establish their first colony on the mainland of North America until 1565).

The popular myth of Thanksgiving dates from 1621, just nine months after the Puritan Separatists landed in Plymouth (or Plimoth as it was then). The colonists had planted their seeds in the spring, and they could now enjoy the fruits of their labours – or at least the vegetables of their labours.

Turkey and wildfowl were easy pickings for somebody with a musket. And a hundred or so natives also turned up with five freshly-killed deer, so there was no shortage of meat either.

Unfortunately there were not enough chairs to go around. Nor enough tables. And they ate with their fingers and knives, because they had no forks. Even so, a jolly time was had by all. They partied hard for nearly a week that year, and surprisingly for Puritans, they even enjoyed their own home brew.

William Bradford, the Separatist’s leader, later wrote: “ye shall gather with one accord, and hold in the month of November, thanksgiving unto the Lord.”

And so the name Thanksgiving stuck.

Except this was no Thanksgiving in the traditional sense – that was very much a very solemn, religious occasion for Puritans.

Nor was it the first harvest thanksgiving festival in the Americas either.

The Spanish settlers who landed in Florida in 1565 were actually the first Europeans to celebrate their harvest in North America – 56 years before the Pilgrims arrived in Plimoth.

The Spaniards were relieved to get off their cramped, stinking ship, and they held their festival on 8th September 1565 to be precise – a much better date for a harvest thanksgiving than November.

Further north, the French established their first colony in Nova Scotia. Being French, they took their eating seriously, and established L’Ordre de Bon Temps (the Order of Good Cheer), to organize their feasts and provide entertainment. Today, Thanksgiving Day – le Jour de l’Action de grâce – is celebrated in Canada on the second Monday in October.

Even so, a formal day of Thanksgiving was never officially recognized – at least, that is, until 1619. On 4th December of that year, the supply ship Margaret arrived at the English settlement of Jamestown, which had been established in 1607. 38 new settlers disembarked, and they were relieved to have made it to the New World alive.

That same day, the ship’s captain held a service of thanksgiving: “We ordaine that the day of our ships arrival at the place assigned for plantacon in the land of Virginia shall be yearly and perpetually kept as a day of thanksgiving to Almighty God.”

So strictly, the first official Thanksgiving Day in America was in Jamestown in 1619, rather than two years later in Plymouth.

Over the years, Thanksgiving Day became formalized. The Continental Congress declared the first national Thanksgiving in 1777, but the custom fell out of use. Then President Lincoln tried to unite a war-ravaged country by declaring a Thanksgiving Day in 1863. It was a big mistake.

Lincoln actually announced two national Thanksgiving Days that year – one on 6th August to celebrate the Yankee victory at Gettysburg, and a second on the last Thursday in November. Not surprisingly the southern half of the country was not keen to celebrate the first of these ‘Thanksgiving’ days in the middle of a civil war!

However neither Lincoln nor successive presidents made the holiday a fixed annual event. Each new president had to announce the date each year. Gradually the last Thursday in November became the most common choice.

In 1941, President Franklin Roosevelt declared that Thanksgiving Day would be the next-to-last Thursday in November – all to boost the economy by extending the Christmas shopping season. It worked! Two years later, Congress responded by permanently establishing the holiday as the fourth Thursday in the month.

Today, Thanksgiving Day is followed by Black Friday – a frenetic day of sales. This has Americans camping overnight outside stores, ready to snap up bargains. Shops used to allow excited shoppers in as early as 4am, but opening times have steadily crept forward.

Last year, Walmart went on the offensive and started their Black Friday sales bonanza a day early – at 6pm on Thanksgiving Day itself. The strategy paid off. The store made over 10 million transactions in just four hours, sold 2 million extra TVs, and boosted profits by billions of dollars.

So we now have the full history of Thanksgiving. Once a harvest festival for Pilgrims; now mostly a shopping opportunity, as any American will tell you. It has become a 21st century festival of indulgence, acquisition and excess.

So I guess nothing much has really changed in 400 years. Now, would somebody please pass the cranberry sauce?

Peter Firstbrook’s new biography of John Smith – A Man Most Driven: Captain John Smith, Pocahontas, and the Founding of America, has just been published by Oneworld Publishing.