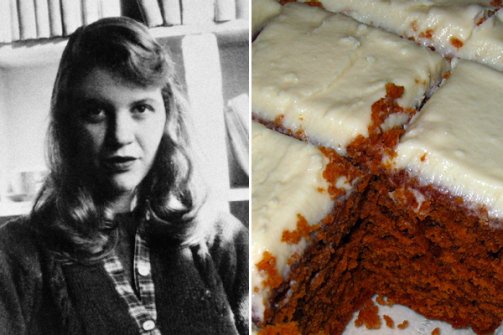 In the autumn Jonathan Law will be returning with a major new series on a remarkable family of eccentrics. In the meantime, here’s a rerun of his take on the underexplored literary topic of ‘Cake imagery in the writings of Sylvia Plath’…

On a damp afternoon one May, enraged cake-obsessive ‘ianf’ posted a plea for more serious treatment of his favourite subject:

You seem to be stuck forever in some make-believe land where Humanity’s Primary Dessert, Cakes, DO NOT MATTER. Yet nothing could be further from the truth – which I’ll now expertly demonstrate by piling literary logick upon more literary logick—until you can’t take this anymo.

As part of his argument – which is far too complex and nuanced to be summarized here – Ian alluded to the baking exploits of the poet Sylvia Plath, and in particular her Tomato Soup Cake with Cream Cheese Frosting (sounds disgusting but apparently delicious).

‘Cake Imagery in the Writings of Sylvia Plath’ is an underexplored literary topic but one that I am happy to broach here in the hope of placating Ian – and happy to pass on gratis to anyone casting about for that elusive PhD subject. Indeed, the failure to address this area of Plath’s sensibility seems quite puzzling, given the numerous references to cakes in her Journals and the wholly characteristic intensity she brings to descriptions of baking, frosting, and (of course) eating the things. Could it be that the subject of Plath and baking has been avoided out of a misplaced delicacy, because it sounds like some awful joke? (In case you’re not there yet, and to avoid circling the issue for the rest of this post: oven.)

As any reader of the unexpurgated Journals will know, cakes good, bad, and indigestible formed a major part of Plath’s daily experience – as was the case, no doubt, for millions of stay-at-home wives in those pre-feminist days of the 1950s and 60s. The poet was not only a keen baker but something of a connoisseur – a stern critic, too, when occasion demanded. Here, for example, are a moist handful of references from the last journal to survive, the one written in Devon (cream tea country) in early 1962:

a handsome fruit cake, with one quarter cut out … Green and red and brown fruit studded the bottom of the yellow slab sides, and it rose to a browned crown …

a plate of absolutely indigestible “Black Walnut flavored” cupcakes from a Betty Crocker mix Mrs. Tyrer had dug out of her closet …

But there’s a lot more to it than this Keatsian responsiveness to the tastes and textures of our cake-crumb world. If Plath knew all about the Joy of Cakes, she was also aware of the dark side – the obsessive, immersive nature of the baker’s craft, the loaded associations with femininity and home-making, the trauma and shame of a bake gone bad. The earliest of her diaries, written at Smith College in 1951, contains this harrowing account of layer-cake disaster:

I headed back to the kitchen, where my layer cakes reposed. I couldn’t figure out how to turn them over so that the plates would hold the two cakes. I put the plates upside down on top of the layers as they sat on the rack and turned the racks over so that the plates would turn out rightside up … Lack of foresight was revealed when the heavy rack, turned over on top of the cakes, crushed deeply into them and crumbled large pieces from the edge. I had not made enough frosting to spread over the side of the cake to conceal the messy uneven edges, so I cut three pieces of the worst-looking part … They crumbled into little shapeless brown masses on the plates. So I hid them in a cupboard in order that no one would see them.

And then there is this sinister observation from the Plath-Hughes household in 1959 – an imagist poem in itself, as well as an omen suggesting more than culinary doom:

The chicken, raw, wrapped in paper in the icebox, dropped a drop of blood on my pristine white cheesecake.

More substantially, baking and kitchen-work figure in two ideas for short stories that Plath worked on in 1957-58 but never managed to complete. The lighter of these is a “modern pot & kettle story” called ‘Changeabout in Mrs. Cherry’s Kitchen’:

If this sounds like a deeply conservative message – stick to what you know, you ‘tired’ toasters and dizzy egg-beaters! – a similar moral emerges from ‘The Day of the Twenty-four Cakes’, a tale of threatened yet victorious domesticity sketched out by Plath in July 1957:

THE DAY OF THE TWENTY-FOUR CAKES … woman at end of rope with husband, children: lost sense of order in universe, all meaningless, loss of hopes: quarrel with husband: loose ends, bills, problems, dead end. Wavering between running away or committing suicide: stayed by need to create an order: slowly, methodically begins to bake cakes, one each hour, calls store for eggs, etc. from midnight to midnight. Husband comes home: new understanding. She can go on making order in her limited way: beautiful cakes: can’t bear to leave them.

In her later development of the story, the wife (Ellen) is on the point of leaving her husband (Jock), who seems to be having an affair:

Compelled to leave something for children: their favorite cakes: starts baking. By compulsion, feels the need to keep on, orders four dozen eggs, confectioners sugar, measures out vanilla, baking powder: sense of order, neatness, creativeness. Born homemaker, sense of dignity, richness: knowledge that she’s what Jock really needs and wants. Trusts him to see it, too … Jock comes home, walks into kitchen: she is vital, flushed from baking, at peace with herself. Knows she will stick with him, and that he has truly come back to her. The last train to the city: she is dressed: just putting frosting on cupcakes.

Although this was written in the happiest days of the Plath-Hughes marriage, hindsight gives it a poignant edge; indeed, the denouement seems like a kind of wishful thinking before the event – in Sylvia’s case, there could be no “new understanding” through eggs, sugar, and baking powder, however manically deployed. ‘The Twenty-four Cakes’ is no great loss to literature, perhaps – but there’s something haunting in the compulsive nature of Ellen’s domesticity, her existential need to “go on making order in her limited way”. Plath seems both like and unlike the wife in the story: a kindred spirit in her craving for “order, neatness, creativeness” – and her need to please her husband – but unlike in having wider outlets for these urges. She could make cakes with the best of them, but she could also do the poems. A few days after writing this story sketch, Plath confided blissfully to her diary:

I feel good with my husband: I like his warmth and his bigness and his being-there and his making and his jokes and stories … and how he shows his gladness for what I cook him and joy for when I make something, a poem or a cake, and how he is troubled when I am unhappy and wants to do anything so I can fight out my soul-battles …

The equation cake = poem seems odd but on second thoughts is rather apt; in its combination of airiness and density a good cake is a lot like a decent poem, and no doubt vice versa.

That her fiercely undomesticated art might arise from the same impulse to order as her domestic goddess act is a paradox that Plath sometimes seemed to recognize. At other times, of course, household duties could feel like a dead weight choking any more adventurous form of creativity. In that same summer of 1957, after a day devoted to baking a pie, Plath worried that she was becoming:

too happily stodgily practical: instead of … writing – I go make an apple pie, or study the Joy of Cooking, reading it like a rare novel. Whoa, I said to myself. You will escape into domesticity & stifle yourself by falling headfirst into a bowl of cookie batter.

But this feeling seems to have been the exception, not the rule. Even in the inspired desperate days that saw the writing of the Ariel poems, Plath carefully noted her baking routines in her daily calendar; this is how we know that she dug out her comforting tomato soup cake recipe on the day that she wrote Death & Co and that she made a lemon pudding cake – from that same Joy of Cooking – a few hours after releasing Lady Lazarus into the world.