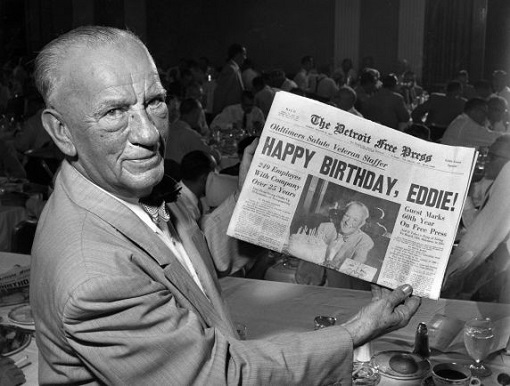 Born on this day in 1881 (in England’s Second City, Birmingham, though his family soon emigrated to the Land of the Free) was Edgar Guest, whose uplifting, nationally syndicated verse became so popular in the US that he was known as the People’s Poet. He wrote perhaps 11,000 poems, many of them collected in more than 20 published volumes. Guest had his own radio show and TV show, and was the first and (so far) last Poet Laureate of Michigan. (He also, as it happens, was the great-uncle of Judith Guest, who wrote Ordinary People.)

The kind of popularity (and income) enjoyed by the likes of Guest and Nick Kenny is pretty much a thing of the past, now that poetry has retreated from the mainstream of popular culture. There’s been the odd eruption, like the pop star-style fame of the Liverpool Poets or Rod McKuen, but they didn’t last long. The works of ‘Patience Strong’ long ago passed their sell-by date, and the nearest thing we have to an Edgar Guest now is perhaps the comic poet Pam Ayres, still going strong and able to fill a concert hall anywhere in the country. There will, most likely, never be another.

Guest it was who wrote the eminently mockable It Couldn’t Be Done – recited in all seriousness by Idris Elba at the 2012 BBC Sports Personality of the Year ceremony:

Somebody said that it couldn’t be done
But he with a chuckle replied
That “maybe it couldn’t,” but he would be one
Who wouldn’t say so till he’d tried.
So he buckled right in with the trace of a grin
On his face. If he worried he hid it.
He started to sing as he tackled the thing
That couldn’t be done, and he did it!

Somebody scoffed: “Oh, you’ll never do that;
At least no one ever has done it;”
But he took off his coat and he took off his hat
And the first thing we knew he’d begun it.
With a lift of his chin and a bit of a grin,
Without any doubting or quiddit,
He started to sing as he tackled the thing
That couldn’t be done, and he did it.

I think I prefer the version that ends ‘he tackled the thing that couldn’t be done – and he couldn’t do it.’

But the poem is notable for its cheeky use of an obsolete word to provide a rhyme for ‘did it’ – ‘quiddit’. This is defined in Johnson’s Dictionary as ‘A subtilty; an equivocation. A low word.’ But not too low for Shakespeare – ‘Why may not that be the skull of a lawyer?’ muses Hamlet at the graveside, ‘Where be his quiddits now? his quillets? his cases? and his tricks?’