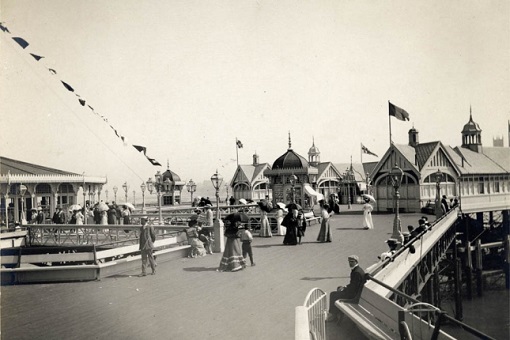 In this week’s cupboard, some dreadful seaside ruffianism…

A correspondent known only as C. L. S. had the following letter published in The Times on 16 August 1871:

Sir, – On Monday last I had the misfortune of taking a trip per steamer to Margate. The sea was rough, the ship crowded, and therefore most of the Cockney excursionists prostrate with sea-sickness. On landing on Margate pier I must confess I thought that, instead of landing in an English seaport, I had been transported by magic to a land inhabited by savages and lunatics. The scene that ensued when the unhappy passengers had to pass between the double line of a Margate mob on the pier must be seen to be believed possible in a civilized country. Shouts, yells, howls of delight greeted every pale-looking passenger, as he or she got on the pier, accompanied by a running comment of the lowest, foulest language imaginable. But the most insulted victims were a young lady, who, having had a fit of hysterics on board, had to be assisted up the steps, and a venerable-looking old gentleman with a long grey beard, who, by-the-by, was not sick at all, but being crippled and very old, feebly tottered up the slippery steps leaning on two sticks. “Here’s a guy!” “Hallo! You old thief, you won’t get drowned, because you know that you are to be hung,” etc., and worse than that, were the greetings of that poor old man. All this while a very much silver-bestriped policeman stood calmly by, without interfering by word or deed; and myself, having several ladies to take care of, could do nothing except telling the ruffianly mob some hard words, with, of course, no other effect than to draw all the abuse on myself. This is not an exceptional exhibition of Margate ruffianism, but, as I have been told, is of daily occurrence, only varying in intensity with the roughness of the sea. Public exposure is the only likely thing to put a stop to such ruffianism ; and now it is no longer a wonder to me why so many people are ashamed of confessing that they have been to Margate.

3 thoughts on “A Trip To Margate”