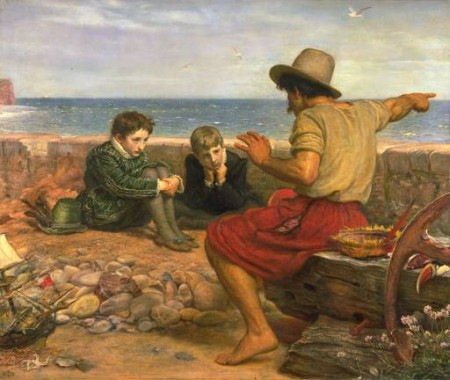 Robert Mighall has travelled from the world of academic literature into that of brands and business. Here’s why the boardroom needs to understand the relevance of a very old art form…

About 2 years ago I was involved in an unsuccessful Annual Report pitch to a FTSE100 company. When they fed back to us explaining why we had been unsuccessful, my personal contribution was singled out for particular comment. Including my reference to Romeo and Juliet when attempting to put a point across. “William Shakespeare”, we were informed, “is not a fit subject for the boardroom”. Of course, this was not the only factor informing their decision. No, they didn’t like my suede shoes either. Nor the elbow patches on my jacket, or the fact that I stood up and walked about a bit when I presented. Needless to say, I haven’t been invited back.

Whilst I’m prepared to adjust my dress before entering a boardroom in future, I’m disinclined to drop the Shakespeare or the message I was trying to impart. Indeed, the incident made me even more determined to preach the Gospel of Storytelling to the corporate world. It is my belief that Shakespeare, and the other masters of narrative, do have a place in the boardroom, because boardrooms urgently need to connect more closely with those living, breathing, chattering life forms down on the streets below. It is to these beings they sell their stuff, however removed they might feel from them in their steel and glass fortresses. Story, as these masters know well, provides the best means to do this.

I sometimes wonder whether the denizens of the boardroom actually do any of the things performed by ordinary human beings. Although I suspect they probably do, you might sometimes be forgiven for thinking they, and much of the broader business community, reside on a different planet, unaffected by the needs, desires and follies affecting the rest of humanity. Some Vulcan offshoot, governed exclusively by reason, logic, numerical values, and where emotion and imagination are strictly outlawed. The boardroom would be its nerve centre, transmitting its dispatches to a self-governed, self-regulated community, while the planet drifts slowly away into the chill regions of galactic isolation.

OK, astrophysics isn’t my strong point, so I’ll return to the safer ground of literary history. The resistance I encountered is symptomatic of a broader divide in our society: a mutual hostility between the self-defined worlds of business and high “culture” that goes back a long way. Nearly a hundred and fifty years ago,Matthew Arnold’s polemic Culture and Anarchy gave us a new term for characterising the way the captains of industry deliberately rejected the ancient authority of Art and Literature as they built their new empire of Commerce. That empire is still in charge today, and is in some ways quite happy to embrace the “Philistine” label Arnold coined. Hard-nosed, fact-and-figure-obsessed, the world of business defines what it is in opposition to what it is not. The lines are still deeply drawn, and encountered every day.

I recently read a novel by a successful finance chap with a literary bent, that made an eloquent and original apologia for what is probably a heresy in the banker bunker. The protagonist muses thus on the fine art of financial instruments:

The advisor’s skill was to understand his client’s objectives and translate them from language – or even inchoate emotion – into numbers, numbers that would be fitted together, instrumentally and deliberately, to create financial structures. These spreadsheet-founded edifices could express and fulfil all sorts of impulses: rational, emotional, equitable, vindictive; a panoply of human emotions and desires”.

This explains to him why “arts graduates, sometimes against expectations, often did well as investment bankers”. An arts degree is a well-trodden road to the citadels of business and finance, especially in the UK. Yet, whilst an assured grasp of Shakespeare might have got you there, you are expected to leave him and his ways behind you at the door. To put that book in your bag, switch on your computer, and deny your humanity until home time.

When I was an Oxford don I lived in Arnold’s enclosed garden of culture, blissfully unaware of that supposedly “real” world ruled by the boardrooms beyond. When I worked for Penguin as the Classics editor, I was awoken from my enchanted slumber as I daily negotiated the challenges presented by attempting to preserve the “best that has been thought and said” (to quote Arnold’s definition of Culture) in a commercial imprint, ultimately answerable to Pearson’s shareholders. I now operate squarely within the business world. Yet I have increasingly seen what that former world can bring to the objectives of one stubbornly resistant to its influence. Storytelling has recently made significant inroads to this purpose. Yet, as my experience suggests, there’s still a long way to go.

Only Connect is my attempt to further this cause. To break through the force fields of denial, and stroll boldly into those boardrooms. Appropriately dressed, if I must, but unflinching in my message to the Philistines.

And why was I referencing Shakespeare in those hallowed halls? Here’s a short excerpt from the book that explains why:

From the chapter ‘What Makes a Story?’

As the editor of the Penguin Classics series I was constantly being asked what makes a work a Classic? The series is very diverse, comprising well over a thousand works of fiction, poetry, philosophy, religion and history from all ages and cultures. Yet they were all labelled ‘Classics’, meaning they had something in common. The answer is still relevant to the job I do today. For what defines a Classic is what makes a compelling story in any field.

A Classic in any medium is a work that endures [Morrissey take note]. It survives the test of time and translates from one language and culture into another. The greatest works from Homer to Hardy, Gilgamesh to The Great Gatsby, allow readers to recognise, through the external circumstances of period and place, a common humanity. These works still speak to people, through time and across space, offering relevant universal truths. That is why they remain Classics, sell in large volumes, and are kept in print by Penguin.

At the core of a Classic, and at the core of compelling story, is an easily identifiable theme. Archetypes tend to be classified at the thematic level, and can be defined in a sentence. Classics continue to appeal because a central human drama is clearly identifiable under all that fancy dress and foreign circumstance. Boy meets girl. Girl’s parents disapprove, or circumstances of class, nationality, misunderstanding get in their way. If they eventually overcome these obstacles (and it’s staring Sarah Jessica Parker) then you have a romantic comedy. If they fail you have tragedy. (This, incidentally, explains my own ill-fated Romeo & Juliet reference in that boardroom. I was simply, as now, trying to explain the need for clarity and focus in how a complex business presents its story.)

Clarity is therefore the first essential of storytelling. For a Classic work, it’s what gives it universal appeal and staying power. For new works, those potential future Classics, it’s what gives them an earthly chance of being noticed, published and promoted. Publishing is an essentially conservative industry, averse to taking risks. When books are bought by publishing houses (and they are bought by the publishers long before they reach the book shop shelves), they tend to fall into recognisable genres. This makes it easier for the publishers to promote the works, the bookshops to shelve them, or Amazon to classify them, and the public to want them. It’s even been claimed that there are only Seven Basic Plots (the title of Christopher Brooker’s exhaustively encyclopaedic classification of the canon proving this). Publishing is conservative, because the book-buying public is. The book-buying public is, because the human mind is, seeking recognisable patterns with enough intriguing variation to reward its attention.

Cinema consistently deals in archetypes, making the claim that there are as many as seven basic plots seem positively profligate. It has turned the business of storytelling into almost an exact science, as well as a highly lucrative commercial enterprise. It is therefore to the movies that I generally turn when seeking to persuade business of the commercial advantages of effective storytelling. And if business audiences are as time-poor, cynical, and attention deficient as we have grounds to suspect, they find their counterpart, if not their match, in the hard-nosed, thick-skinned money men from movie land.

The who, what and where of Robert Mighall can be found here: http://robertmighall.com.

3 thoughts on “The Bard and the boardroom”