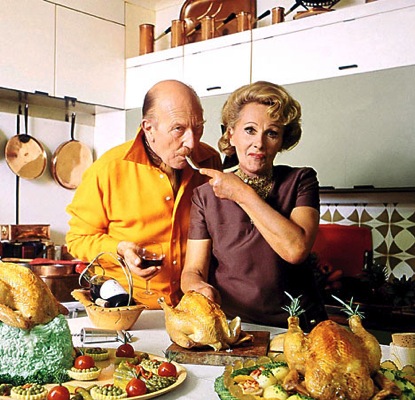 There was so much to admire about Fanny Cradock. And then it all went wrong…

I can’t quite make up my mind about Fanny Cradock. I’m on the fence about this one. There are many things to admire: the innovative cookery programmes, the slick, ball-gowned cookery demonstrations presented to packed audiences at the Albert Hall (ground-breaking stuff at the time), her grasp of the complexities of French gastronomy- oh she knew her stuff all right. Utterly professional, in those scary days of one-take television she could talk directly to the camera in a continuous stream without fluffing her lines, an extraordinary task for a cookery presenter. And she was one of the very first.

And then in the latter days it all went wrong. Very wrong. The world moved on, leaving Fanny behind. I’m watching an old YouTube clip as I type. Fanny lampooning dear old A J P Taylor on the Parkinson show; pancaked make-up, grimacing Dan Leno eyebrows, all the glamour and snobbery of caustic coffee mornings and gin-sodden bridge parties at The Club. Strange. Aggressive. An excruciating performance.

But that might be part of the fascination. In those days, the servant less middle classes aspired to sophisticated gluttony- to black tie dinner parties held in honour of The Boss, graced by the food of Escoffier, as re-packaged and regurgitated by the Cradocks in their numerous books. Today, aspiration is dead, unless you count the current vogue for both the manners and diet of the Mediterranean peasantry. Fanny would flounder in the brave new world of dancing Hairy Bikers and guitar strumming, long-haired River Cottagers. Or would she have done battle? 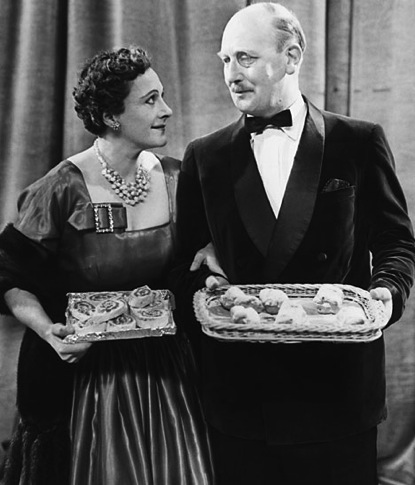 Johnnie strikes me as an enigma. He left his wife and four children to shack up with Fanny, and if The Independent is to be believed, apparently never saw them again. Fanny was the star, Johnnie the claret quaffing, henpecked stooge. Does he not seem like a minor character from a Dornford Yates thriller, or one of those blazer-wearing characters propping up the bar at the local Rotary Club? Murder in the Vicarage. An Old Harrovian and Major of Artillery- the Cradocks liked to remind you of this fact, often. Funny that. But then ‘bi-lingual’ Fanny was supposed to have been born in the Channel Islands, when, in truth, her birth was formally registered in West Ham.

I’ve got some inside info. My mother once spent a day with the Cradocks. Back in 1967 my mother wrote to Bon Viveur declaring her ‘ever-lasting gratitude to The Daily Telegraph and Bon Viveur if they could teach her how to bake cakes’.  She won the competition, but was forced to make bread instead- which she knew how to do perfectly well as it was. The event took place at the Cradock’s Georgian dower house, near Watford. Johnnie – I quote- was a ‘sweet old boy’, but the silly sausage forgot to turn on the oven and Fanny gave it to him: all two barrels of her scorn. It makes you wonder if this was all part of the act. Or was this the reality behind their marriage? But then, they weren’t actually married, were they?

I turned to Time to Remember, a year in the life of- a monthly account of their Continental excursions. There’s a bizarre moment when Johnnie, at the wheel of  “the Duchess” (their Bentley Flying Spur) is attacked by a huge flock of enraged owls. It’s also a catalogue of outrageous name-dropping:

“We brooded over what to give to Somerset Maugham when he came   to luncheon…we unearth a dinner we gave for Mrs Douglas Fairbanks…a dish of very fine asparagus set Nubar Gulbenkian in a wilful humour, debating the perils of striving for a place in heaven….”

And in a later television interview, Fanny lets slip:

Despite all this- or again, because of it, Britain has to be a better place for the Cradocks. Anyone who reveals the Mirabelle’s over-complicated recipe for a bog-standard Irish Stew has to be a good egg. In Fanny Cradock Invites you to a Wine and Cheese Party, the camera lingers on the Cradock’s West Highland Terrier, Mademoiselle Lolita Saltena, lolling by their front door. As Fanny herself said (of her dog): ‘Not quite a lady, but we adore her’.

Luke Honey blogs about food and culture at The Greasy Spoon Blog, and also on art and antiques over at his Luke Honey antiques site.

20 thoughts on “Food in the Sixties: The Enigma of Mr and Mrs Fanny Cradock”