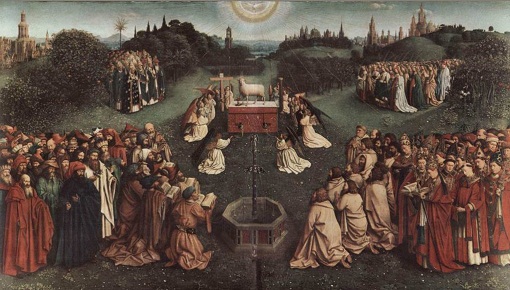 In this week’s music column, Mahlerman dabbles in mysticism…

Dreamers dream and, asleep or awake, we all dream.  Mystics are an altogether more specific group who gather around a belief system of incandescent intensity; mysticism is at the very centre of their lives, and this is probably explained by the fact that the mystic ( it is nearly always men ) has almost certainly lived through an experience which has forced him to this attitude of mind.  He doesn’t need the revelation of the theologian, the logician’s logic, the reason of the rationalist philosopher or, for that matter, the plain facts of science; he is driven toward a universal unity by an intuitive feeling.

If I lift mine eyes from the keyboard and gaze down toward Londinium I can see, in the foreground, the greensward of Peckham Rye in the Borough of Southwark.  In 1765 the eight year old William Blake was walking this meadow when he saw his first vision ‘A tree filled with angels, bright angelic wings bespangling every bough like stars’   This poet, painter and engraver was also an opinionated writer, who developed his attitude of revolt against authority in a handful of books combining political belief and visionary ecstasy.  His sixty nine years of life were spent in almost complete penury, and he was interred somewhere in Bunhill Fields near the Barbican.  Like the true mystic that he was, he believed that nothing in the world is trivial, nothing is unimportant, common or unclean, feelings crystallised in these touching lines:

To see a world in a grain of sand
And a Heaven in a wild flower,
Hold Infinity in the palm of your hand
And Eternity in an hour.

Here, perhaps not his greatest poem, but certainly his most popular and ‘musical’, ‘The Tyger’  read by the incomparable, pseudonymous Tom O’Bedlam.

It is said that in a virtual world, we will yearn increasingly for reality, and in this technologically oversaturated culture it is not difficult to understand the mass appeal of the English composer Sir John Tavener, now established as one of the most popular and acclaimed ‘mystic minimalists’ of our age.  Over the years he has dabbled in Sufism, Hinduism and Buddhism and, although he dipped his toes into the European avant-garde, he removed them in double-quick time when he discovered that his innate sense of religious creativity had no natural berth there.  He first appeared with The Whale, backed by Beatle George Harrison and recorded on the Apple label, and the nay-sayers rapidly formed a queue  –  and he is still tormented in his 70th year by those who would forge a link between vacuity, and a thoughtfully packaged product of popular culture, admired by royalty, celebrities and pop stars.  If you havn’t made your own mind up, try this serene masterwork As one who has slept, sung by Polyphony and Stephen Layton.

The day was January 15th, 1941.  The place was Stalag V111-A in Gorlitz, Germany.  The 32 year old French composer Olivier Messiaen, recently serving as a medical orderly, had been captured near Nancy, along with a pair of fellow musician-soldiers, the cellist Etienne Pasquier and the clarinetist Henri Akoka; the violinist Jean le Boulaire joined them later forming, with Messiaen’s piano, an inspired quartet.  If it could be said that they were fortunate in any way, that good fortune came in the person of one of the guards at the camp, Karl-Albert Brull.   Brull’s faith in the destiny of the Third Reich was obviously beginning to wane, as he took it upon himself not just to persuade the prisoners that life inside the camp was preferable to freedom outside, but provided the composer with pencils, erasers and music paper to work on what turned out the be the marvellous eight-movement Quartet for The End of Time.  The ‘premiere’ on that cold, rain-soaked, January day was attended by several hundred inmates along with a handful of German officers.  Here, the fifth movement, Praise to the eternity of Jesus, marked ‘infinitely slow, ecstatic’.

Alexander Scriabin – genius or madman?  Probably a bit of both.  Under the baleful influence of Theosophist spiritualism he ‘invented’ a mystic or Promethean six-note cord (C, F sharp, B flat, E, A, D) that he adapted variously in later works, notably the Poem of Fire, Opus 60.  The vogue for this odd, maniacally conceited but far from talentless Russian peaked at around the time of his death in 1915.  It seems quite fitting that a bizarre life should be concluded by a shaving cut; he contracted septicemia.  Around the turn of the century he began reading Nietzsche and from there drifted into mysticism.  Key signatures were dropped, and his vast orchestral scores began to be swamped by strange instructions ‘Luminously and more and more flashing’  (please, no jokes).  Add to all this the likelihood that he was victim of the genetic disorder synesthesia, in which sound is translated directly into colour;  that he became a compulsive hand-washer, refusing to touch money without wearing gloves;  and that his complete rejection of a moral code resulted in the abandonment of his wife and four children to live with his lover Tatiana Schloezer as ‘a sacrifice to art’.  The composer’s final, unrealised ‘big idea’ was the Mysterium, involving the end of the world and the creation of a new race of man.  The premiere would be at the foot of the Himalayas, and the new race would be ‘relieved of sexual difference and other bodily limitations’.  Where do I sign?

Almost all of the madness is to be heard in the sultry Poeme de l’Extase and, if you can take pleasure in the secular use of incense and the decadent style, there are many wonderful sounds here to drown in.  The painting Composition VII  by Wassily Kandinsky 1913 hangs in the Tretyakov Gallery in Moscow.

3 thoughts on “Mystics and Dreamers”