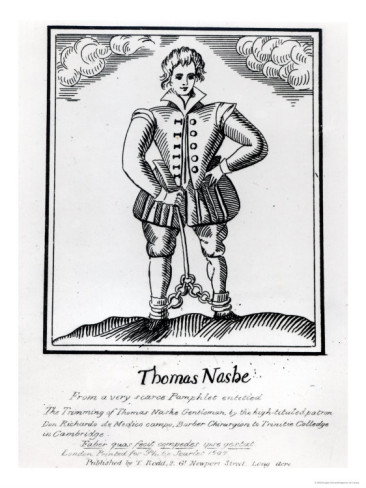 Noseybonk may have provided the definitive guide to the art of arguing on the internet (in this very reasonably priced e-book available from Dabbler Editions), but, as Frank discovers, the roots of Blogmanship stretch far back into the past…

I have been reading Thomas Nashe, Elizabethan master of invective and intemperate prose. Nashe’s Lenten Stuff (1599), his final work, is (among other things) a paean of praise to Great Yarmouth and to the (red) herrings caught there, and has been well-described by Edmund Gosse as

evidence that Nashe had now arrived at a complete mastery of the fantastic and irrelevant manner which he aimed at. This book is admirably composed, if we can bring ourselves to admit that the genre is ever admirable. The writer’s vocabulary has become opulent, his phrases flash and detonate, each page is full of unconnected sparks and electrical discharges. A sort of aurora borealis of wit streams and rustles across the dusky surface, amusing to the reader, but discontinuous, and insufficient to illuminate the matter in hand. It is extraordinary that a man can make so many picturesque, striking, and apparently apposite remarks, and yet leave us so frequently in doubt as to his meaning.

Bearing in mind that last point, it seems to me that in the following passage he could be calling across the centuries to the condition of the contemporary blogger, faced with disputatious, argumentative, irrelevant, and ignorant commenters:

I will deal more boldly, & yet it shall be securely and in the way of honesty, to a number of God’s fools that for their wealth might be deep wise men and so forth (as now-a-days in the opinion of the best lawyers of England there is no wisdom without wealth, allege what you can to the contrary of all the beggarly sages of Greece), these, I say, out of some discourses of mine, which were a mingle-mangle-cum-puree, and I knew not what to make of myself, have fished out such a deep politic state meaning as if I had all the secrets of court or commonwealth at my fingers’-ends. Talk I of a bear, O, it is such a man that emblazons him in his arms, or of a wolf, a fox or a chameleon, any lording whom they do not affect it is meant by. The great potentate, stirred up with those perverse applications, not looking into the text itself, but the ridiculous comment, or if he looks into it, follows no other more charitable comment that that, straight thunders out his displeasure, & showers down the whole tempest of his indignation upon me, and, to amend the matter, and fully absolve himself of this rash error of misconstruing, he commits it over to be prosecuted by a worse misconstruer than himself, videlicet, his learned counsel (God forgive me if I slander them with that title of learned, for generally they are not), and they, being compounded of nothing but vociferation and clamour, rage & fly out they care not how against a man’s life, his person, his parentage, two hours before they come to the point, little remembering their own privy scapes with their laundresses, or their night walks to Pancras, together with the hobnailed houses of their carterly ancestry from whence they are sprung, that have cooled plow-jades’ buttocks time out of mind with the breath of their whistling, and, with retailing their dung to manure lands, and selling straw and chaff, scratched up the pence to make them gentlemen. But, Lord, how miserably do these ethnics, when they once march to the purpose, set words on the tenters, never reading to a period (which you shall scarce find in thirty sheets of a lawyer’s declaration) whereby they might comprehend the entire sense of the writer together, but disjoint and tear every syllable betwixt their teeth severally, and if by no means they can make it odious, they will be sure to bring it in disgrace by ill-favoured mouthing and mis-sounding it. These be they that use men’s writings like brute beasts, to make them draw which way they list, as a principal agent in church controversies of this our time complaineth. I have read a tale of a poor man and an advocate, which poor man complained to the king of wrong that the advocate had done him in taking away his cow. The king made him no answer but this, that he would send for the advocate and hear what he could say. Nay, quoth the poor man, if you be at that pass that you will pause to hear what he will say, I have utterly lost my cow, for he hath words enough to make fools of ten thousand. So he that shall have his lines bandied by our usual plodders in Fitzherbert, let him not care whether they be right or wrong, for they will writhe and turn them as they list, and make the author believe he meant that which he never did mean, and, for a knitting up conclusion, his credit is unreprievably lost that on bare suspicion in such cases shall but have his name controverted amongst them, & if I should fall into their hands I would be pressed to death for obstinate silence and never seek to clear myself, for it is in vain, since both they will confound a man’s memory with their tedious babbling, and in the first three words of his apology with impudent exclamations interrupt him, whenas their mercenary tongues (lie they never so loudly) without check or control must have their free passage for five hours together.

I speak of the worser sort, not of the best, whom I hold in high admiration, as well for their singular gifts of art and nature as their untainted consciences with corruption, and from some of them I avow I have heard as excellent things flow as ever I observed in Tully or Demosthenes. Those that were present at the arraignment of Lopez (to insist in no other particular) hereof I am sure will bear me record. Latinless dolts, saturnine heavy-headed blunderers my invective hath relation to, such as count all arts puppet plays, and pretty rattles to please children in comparison of their confused barbarous law, which if it were set down in any Christian language but the Getan tongue, it would never grieve a man to study it.

Commit that to memory and, next time you are leaning insouciantly against a mantelpiece at a swish cocktail party, you have the perfect rejoinder should any nitwit have the temerity to suggest that bloggers have it easy.