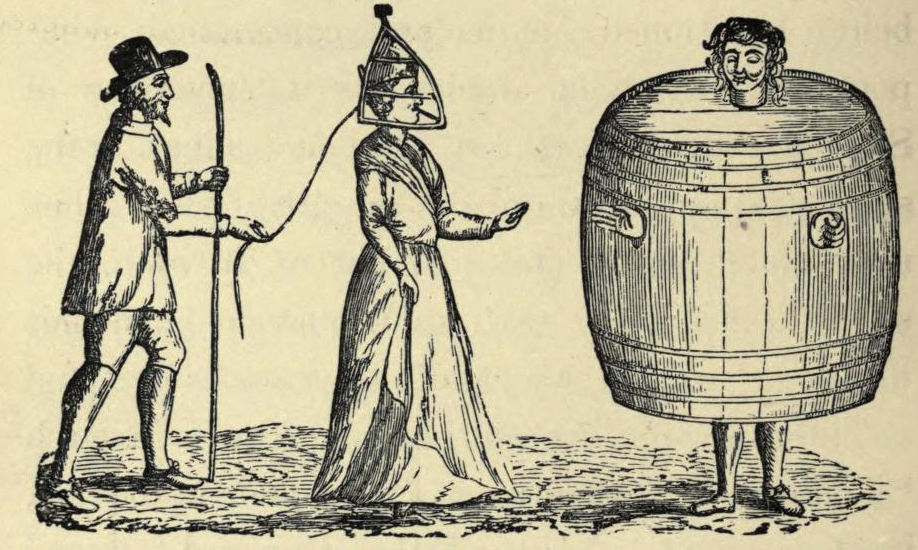 A Drunkard’s cloak or Schandmantel was a type of wooden barrel used in several countries for the punishment of miscreants, in much the same way as stocks.

Drunkenness was made a civil offence in England by the Ale Houses Act 1551, or “An Act for Keepers of Ale-houses to be bound by Recognisances”. The drunkard’s cloak, sometimes called the “Newcastle cloak”, became a common method of punishing recidivists, especially during Cromwell’s reign, during which he suppressed many of England’s alehouses, particularly in Royalist areas, and the authorities made regular use of the cloak.

An early description of the drunkard’s cloak appears in Ralph Gardiner’s England’s Grievance Discovered, first published in 1655. A man in Newcastle claimed to have seen

“men drove up and down the streets, with a great tub, or barrel, opened in the sides, with a hole in one end, to put through their heads, and to cover their shoulders and bodies, down to the small of their legs, and then close the same, called the new fashioned cloak, and so make them march to the view of all beholders; and this is their punishment for drunkards, or the like.”

Gardiner’s account was reproduced in 1789 in John Brand’s History of Newcastle-on-Tyne, accompanied by an early illustration of a drunkard’s cloak. A similar device was used in Holland; one author also recorded its existence in Denmark, where it was called the “Spanish Mantle”. The german version – the Schandmantel (“coat of shame”), came into use in the 13th century. Having no specific alcohol bans, it is suggested that the Schandmantel was most likely used as punishment for poachers and prostitutes.

The Schandmantel was weighted along the lower rim and around the neck opening as a way of corporal punishment in addition to the severe public humiliation it posed. The 18th-century development of the iron maiden is thought to have been a misinterpretation of the function of a partially reconstructed Schandmantel, which could sometimes have non-lethal spikes inside.

These occurrences, along with the observations of one 19th-century historian, who noted that no mention of the punishment was made in any local documentation, including the Newcastle Corporation accounts, prompted William Andrews to suppose in 1899 that the Drunkard’s Cloak was a custom imported from the Continent, and that its use in England was confined to Newcastle.

Further afield, instances of its use are found in the US; a paper described in 1862 how a

“wretched delinquent was gratuitously framed in oak, his head being thrust through a hole cut in one end of a barrel, the other end of which had been removed, and the poor fellow loafed about in the most disconsolate manner, looking for all the world like a half-hatched chicken.” 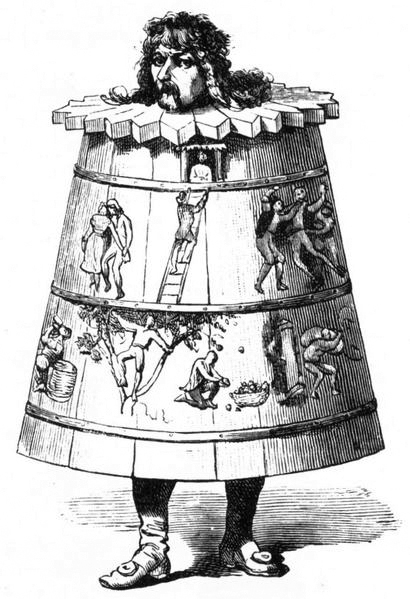 2 thoughts on “The Drunkard’s Cloak”