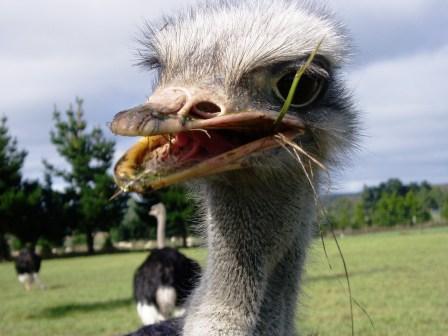 We know how important it is to eat three square meals a day – but what should those meals be? I have been doing some important research on this matter, and have devised what we might call the ostrich – prince – magician diet.

Breakfast, first, where we follow the example of a twentieth-century ostrich in London Zoo. The bird ingested

a lace handkerchief, a buttoned glove, a length of rope, a plain handkerchief (probably a man’s), assorted copper coins, metal tacks, staples and hooks, and a four-inch nail.

Do not be alarmed by the fact that the ostrich died. Everything dies, eventually. But let us make sure we tuck into splendid breakfasts before we do.

For lunch, we can do no better than to replicate a list of the grub rustled up by the Merchant Taylors’ Company to welcome Prince Henry into their ranks in the summer of 1607:

That list is taken from Ben Jonson by Ian Donaldson (2011), reviewed here.

The dinner began with a soup of asps in simmering oil. On each side was a dish of vegetables, one containing thistles and burdocks, and the other fuming acid. Other side dishes, of turtles, rats, bats and moles, were garnished with live coals. For the fish course he ate a dish of snakes in boiling tar and pitch. His roast was a screech owl in a sauce of glowing brimstone. The salad proved to be spider webs full of small explosive squibs, a plate of butterfly wings and manna worms, a dish of toads surrounded with flies, crickets, grasshoppers, church beetles, spiders, and caterpillars. He washed all this down with flaming brandy, and for dessert ate the four large candles standing on the table, both of the hanging side lamps with their contents, and finally the large center lamp, oil, wick and all. This leaving the room in darkness, Dufour’s face shone out in a mask of living flames.