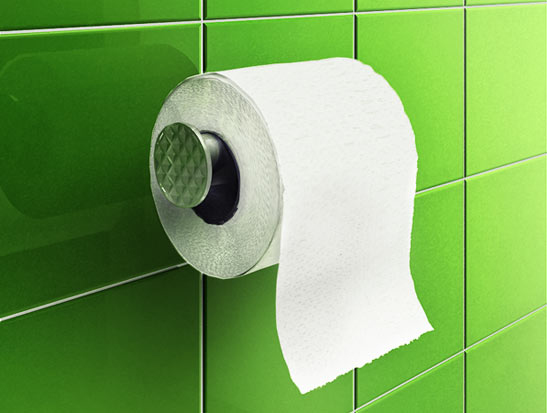 This week’s wikipedia wierdness is indeed rather trivial, and made even more unusual by the voluminous amount of data devoted to serious discussion of something so meaningless. There are many thousands of words written on this nonsense so I have attempted to condense the key points for you here…

Toilet paper orientation concerns the debate over the advantages of whether toilet paper may hang over (in front of) or under (behind) the roll whilst on a holder. The choice is largely a matter of personal preference, dictated by habit. In surveys of American consumers and of bath and kitchen specialists, 60–70% of respondents prefer over.

Despite its being an apparently trivial topic, some people hold strong opinions on the matter. Defenders of either position cite advantages ranging from aesthetics, hospitality, and cleanliness to paper conservation, the ease of detaching individual squares, and compatibility with a recreational vehicle or a cat. Celebrities and experts are found on both sides. Some writers have proposed connections to age, sex, or political philosophy; and survey evidence has shown a correlation with socioeconomic status.

In the article “Bathroom Politics: Introducing Students to Sociological Thinking from the Bottom Up”, Eastern Institute of Technology sociology professor Edgar Alan Burns describes reasons why toilet paper politics is worthy of examination. Burns argues that there is a hidden lesson:

Sociologists are often concerned that their discipline is seen merely as an elaboration of the trivial or the obvious. Therefore, the theoretical point illustrated through the paper-hanging exercise is not that small-scale realities are the opposite of big picture sociology, but rather that the big picture does not exist separately “out there.” Minor details and “taken for granted” rules and beliefs are the built-in meta-narratives of society, and this is what makes them so powerful.

Similar everyday topics that have been used to awaken the sociological imagination include games of noughts and crosses, violations of personal space, the rules of walking, and the etiquette by which men choose urinals in public restrooms.

Morton Ann Gernsbacher, a professor of psychology at the University of Wisconsin–Madison, compares the orientation of toilet paper to the orientation of cutlery in a dishwasher, the choice of which drawer in a chest of drawers to place one’s socks, and the order of shampooing one’s hair and lathering one’s body in the shower. In each choice, there is a prototypical solution chosen by the majority, and it is tempting to offer simplistic explanations of how the minority must be different. 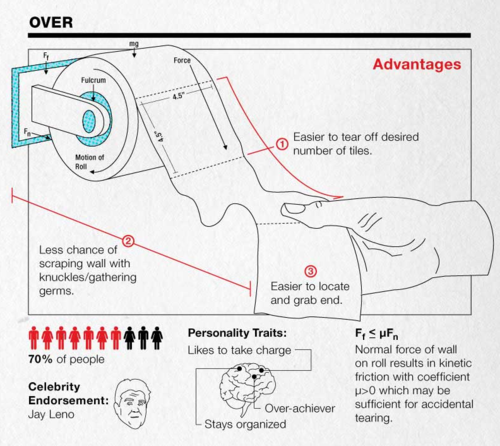 In the academic field of evaluation, Michael Scriven writes that the question of the correct way to insert toilet paper is a “one-item aptitude test” for measuring one’s evaluation skills. These skills include the evaluative attitude, practical logical analysis, empathy, teaching, and being a quick study. To prove one’s competence, one may either derive the “one right answer” or prove that the test is or is not culturally biased.

Solutions to conflict arising from the over-or-under conundrum range from compromise, to using separate dispensers or separate bathrooms entirely, or simply ignoring the issue altogether.