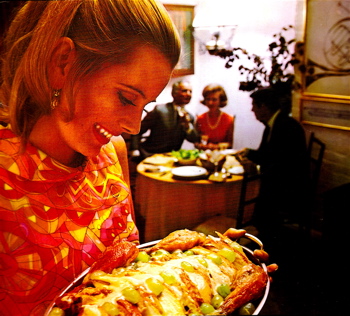 In the first of a small series, London-based dabbler Luke Honey, maître d‘ of The Greasy Spoon Blog, resurrects a venerable cookery magazine, complete with a retro recipe that has long since fallen out of favour…

Not that long ago I managed to save a complete set of the 1968 Cordon Bleu Cookery Course, all 72 of ’em in a near mint condition. A friend at work was about to chuck them away into the skip. They make fascinating reading: a time-warp into a familiar, but very different age.

I’m amused by the photograph from the very first issue, which I’ve posted above. A youngish couple are having the in-laws to dinner. For the first time at the new flat?  There’s bound to be a bay tree and carriage lamp outside the glossy front door. Daddy’s very much the silver-haired roué, the clubbable chairman (something in plastics?)  Bet you anything he drives a Jag, and keeps a mistress holed up in a tiny flat in Dolphin Square. He’s holding forth while his long-suffering wife (Jackie Kennedy shift-dress and pearls) sits patiently, “Yes, Dear, No, Dear, Three Bags Full, Dear”.

Youngish Hubbie looks like an International Man of Mystery; probably a thrusting young exec. If he plays his cards right, Daddy might get him a directorship at the family firm. Our heroine’s a secretary at some fashionable advertising agency somewhere. J Walter Thompson?  Though God Knows how she finds the time to cook: the Cordon Bleu Cookery Course is quite clearly aimed at women who don’t go out to work; the draconian instructions include a precise timetable for operations: 8.43am Light the Oven, 9.59am Truss the Chicken. That sort of thing. The couple’s London pad is slightly trendy- the Victorianesque French Horn print is very Conran. And what is she gazing at so proudly?  It’s none other than our old friend, Chicken Véronique! 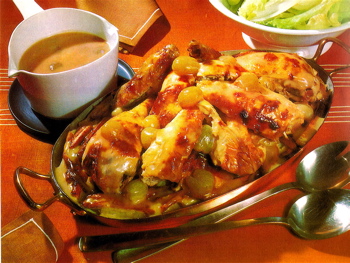 Here’s how to make the dish, with precise instructions from the Cordon Bleu Cookery School, 1968.

First, you need to season the inside of a trussed chicken, but you’re not allowed to season the outside, as the salt will “draw out the juices, and prevent browning. (Hang on! Is this really true?  Simon Hopkinson does. Not sure about that one). The trussed bird will keep its shape, and be easier to carve. (Yup, that sounds right).

Next, you rub the chicken with butter, and put 3-4 sprigs of tarragon inside, along with a further nut of butter. The chicken is placed in a roasting tin, with ¼ pint of chicken stock, covered with buttered paper, and roasted for an hour at 400° F. After the first 15 to 20 minutes, the chicken should be removed from the oven and basted; and then basted again after another 15-20 minutes, turning the chicken around, each time. The buttered paper should be removed a few minutes before the end of the cooking, to brown the bird.

The hot chicken is then removed to a wooden board, jointed and carved. The remaining juices in the roasting tin are reduced over a steady heat until “brown and sticky”. Another ¼ of a pint of chicken stock is added to the pan to make a gravy, which is then strained into a small saucepan and thickened with ½ teaspoon of arrowroot mixed with a tiny bit of water. (Add the arrowroot mixture away from the heat, and then stir until boiling). Two tablespoons of double cream are stirred into the gravy.

Peel and pip some white or muscat grapes (you can blanche them in boiling water to help the process), and drop them into the gravy. The chicken pieces are arranged on a silver-plated oval-shaped serving dish, the gravy is spooned all over it, and the grapes scattered over the chicken. The remaining gravy and grapes (not sure about keeping the grapes in the gravy, very odd) are served separately in a sauceboat.

Chicken with Gravy. Served with Grapes. What do you think?  The way forward, or a definite step backwards?

Next time on “Food in the Sixties”: Len Deighton and Cooking for Men: Making Food Sexy