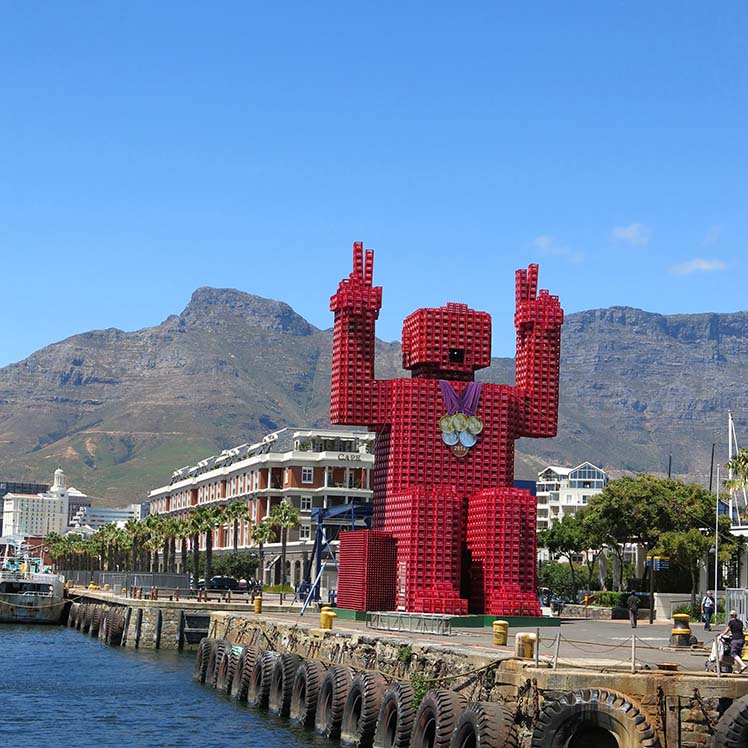 Arriving at the luggage reclaim in Cape Town, I couldn’t spot a single black face among the passengers from our plane. South Africa does seem to attract a certain type of tourist – less package tour, more ‘comfortably travelled.’  There’s an air of middle-England Middletonia about the place. Elderly gents in floppy-brimmed cricket style hats accompany floral-dressed ladies to afternoon tea. Aspiring businessmen meet aspirational divorcees over cocktails on the lawn. Fine looking, suntanned young men hang out with fresh-faced, longhaired girls on yachts and safaris.

After an overnight flight from the UK, the first thing most visitors want to do is to crash out on a sun lounger by the pool.  I did this and promptly fell to sleep under an umbrella. I forgot that the sun was moving, so half my body ended up being scorched under blisteringly hot rays. The next day I looked as though I’d been folded in half, like Harry Worth in a shop window – one side of me was white and the mirror image was lobster red. “British people always roast themselves in the sun and end up looking so stupid,” announced a passing American hotel guest loudly to his Cara-thigh-gapped companion.

Our hotel’s emblem was a seal – many of which were seen lolloping on the wooden deck beneath our window. Increasingly bronzed (on one side), and fattened by some splendid meals, I began to identify more and more with my blubbery brethren. Sadly, many of its inhabitants struggle to afford a decent meal, but Cape Town has plenty to offer les gourmands Anglais (a name kindly bestowed upon my husband and I during one legendary holiday in France).

Top on my list of restaurants visited are: Blues in Camps Bay – one of the oldest established eateries in the area, serving fabulously fresh seafood, overlooking the beach; Gold – a converted church in an offbeat part of Greenpoint, with a delicious set five course Cape Malay menu and lively African entertainment; Belgian tourist trap, Den Anker, on the Waterfront – which offered me a bib to eat shellfish (I took a photo before and after my piri-piri prawns just to prove I’d made no mess whatsoever)… And The Roundhouse – an ex Dutch East India Company guardhouse and former hunting lodge overlooking Camps Bay (magical at sunset), which serves some of the finest contemporary cuisine in South Africa. Try the organic ‘vegetable patch’, poached salmon trout, fallow deer and passion fruit soufflé with coconut sorbet.

There was no escaping the French on this trip either, as a French frigate was also parked beneath our hotel window. I’m not talking about a bird here, but a warship – with guns. For several days people scurried to and from the boat. One night there was a party involving whistles and elaborate naval hats (were several admirals on board, perhaps?) The day the vessel left was the very definition of a military operation: l’hélicoptère was spectacularly unveiled and prepared for action. Tugs, cranes and macho operatives worked with absolute precision, as marines lined up in salute, and a fanfare of trumpets marked the boat’s departure. The following morning, a Cayman Islands registered 303 foot super yacht called Tatoosh moored in exactly the same spot.

Due to one of BA’s all too often re-boots of their media system, I’d watched half a French film on the way out too. The Intouchables is based on a true story of a wealthy French quadriplegic and his black carer. Fortunately, I caught the second half on the way back. It was moving and funny – and testament to the Earth Wind and Fire effect (When I was at university, one of my fellow students visited her doctor complaining she was feeling depressed. He didn’t prescribe any drugs, but suggested that she listen to as much Earth, Wind and Fire music as possible.)

As for shopping, there are a variety of malls and craft markets in Cape Town. In the Craft Market and Wellness Centre, you’ll find an eclectic selection of stalls with psychics, crystals, jewellery, handicrafts and books – such as My Life as an Apple Tree and Stalking the Tricksters. Forgetting to take a book with me, I opted for one called Top 5 Regrets of the Dying… a slow and far from uplifting holiday read, if not a regrettable purchase. However, it made me recall something I discovered researching a book of my own – that poor Africans, faced with the ever-present threat of death, are much more philosophical about it than we are. And, perhaps it’s something to do with the sunshine, but everyone I met in Cape Town was smiling and wanted to share a joke.

Also on the Waterfront, The African Trading Port has a stunning offering of curiosities from all over Africa, ranging from stuffed lions, metal and stone statues to traditional carved wooden artefacts, furniture, contemporary sculpture and artworks. Plus, Woolworths is still alive and well… in South Africa. The store is a sort of cross between Marks & Spencer and Zara, with clothes that actually fit (unlike M&S – too large, and Zara – too small) and unfussy home accessories. There’s a great selection of knickers, including plenty for those who find thongs excruciating and big knickers ugly. And, because of the relative value of the Rand, you can buy these for less than half the price of their UK equivalent.

I’ve visited Cape Town and the winelands before, but on this occasion took my first trip up Table Mountain – and to Robben Island. I would strongly recommend both. On a fine day, the views from Table Mountain are simply breathtaking. I made it my mission to get as far away as possible from the chap who, having reached the top of one of the oldest mountains on earth, decided to have a cellphone shouting match with his bank. A trip to Robben Island, where many political prisoners, including Nelson Mandela, were held captive, is both humbling and inspiring. But the prison-museum turned out to be less scary than a modern day medicine man jabbering dementedly in Zulu at his mobile phone for fifteen minutes on the ferry ride.

Anyway, to sum up, Cape Town offers great weather, a wide array of natural and manmade wonders, fantastic food and excellent value for money – so long as you can stomach the hefty airfare and the inequality.

10 thoughts on “Shopping, Scoffing and Sunshine in South Africa”