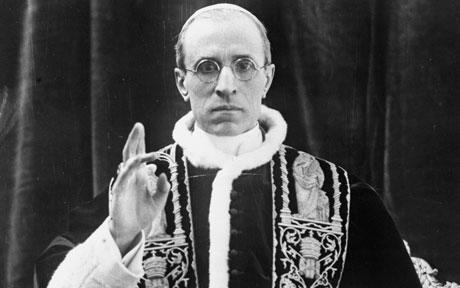 As Pope Benedict announces his retirement, Frank recalls Pius XII (Pontiff from 1939 to 1958), an expert in all matters who felt qualified to lecture TS Eliot on literature…

So sudden and unexpected was Pope Benedict’s abdication this week that I was caught on the hop and have not had time to prepare Key’s Patent Pontiff Prognosticator. Without it, it is hard to see how on earth, as it is in heaven, the conclave of cardinals will arrive at a proper decision. I have already received a few phone calls from certain redhats begging me for guidance. At such short notice, not having had time to familiarise myself with all the holy candidates, the best I can do is to hope they elect someone of the same calibre as Eugenio Pacelli, the man who became Pope Pius XII.

Pacelli had the right stuff, for a Pontiff. He ordered that anyone in the clergy who was on the other end of the telephone to him should kneel throughout the conversation, and the gardeners in his private garden were instructed to hide in the bushes as he walked past, so he wouldn’t have to look at them. Having, of course, sworn an oath of poverty, he drove around in a huge limousine with no chairs in the back, just a large throne. He also seems to have regarded himself as an expert on all manner of subjects. Here is John Cornwell, in Hitler’s Pope : The Secret History Of Pius XII (1999):

If he showed signs of grandiosity it was in his tendency to expatiate on an ever expanding range of topics. So numerous and so beyond his competence were these specialised talks, or ‘allocutions’, that the practice seemed symptomatic of ripening delusions of omniscience. He lectured visiting groups on subjects such as dentistry, gymnastics, gynaecology, aeronautics, cinematography, psychology, psychiatry, agriculture, plastic surgery, and the art of newscasting. A visitor to his study once remarked on the piles of fat manuals around his desk; Pacelli responded that he was preparing a talk on gas central heating. When T S Eliot, arguably the leading English-language poet and literary critic of his day, came to the Vatican for a private audience in 1948, Pacelli delivered him a lecture on literature.

I am sure there must be a cardinal among the current gaggle – if that is the correct collective noun – with similar chops. Let us pray it is so.

Meanwhile, I am minded to observe that, a few years ago, these persons of the Islamic persuasion seem to have been right after all . . 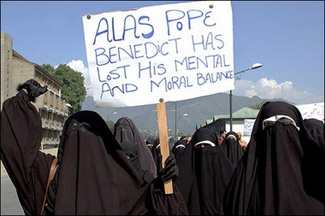