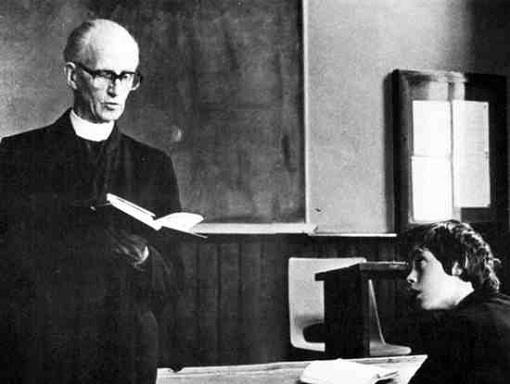 Frank recalls a very memorable teacher (not pictured above)…

“Who’s your favourite Jesuit, Frank?” It’s not a question I am asked very often, but when I am, I reply, without skipping a beat, “Why, Gerard Manley Hopkins, of course!” This can lead to a supplementary question, where I am limited to Jesuits I have actually met, in which case I say “Why, Father Ninian MacNamara, of course!”

Father MacNamara was the chaplain at my grammar school for the latter half of my time there. He couldn’t hold a candle to Hopkins, of course, but he was in his own way a quite magnificent Jesuit.

In spite of the Irishry of his surname, he was a superbly English gent. He had the look, and the manner, of the MP Jacob Rees-Mogg – himself a Catholic – with the addition of a pair of rimless spectacles which lent him the air of a cartoon Nazi villain from the films. His voice, though not quite as posh as “Vox populi, vox Dei” Rees-Mogg, was a fine and resounding instrument. It had a tendency towards the high-pitched and declamatory, rather like Michael Palin’s voice in his “Oh Lord, ooh you are so big” sermon from The Meaning Of Life.

Though his chief concern was, no doubt, our immortal souls, most of his energies were devoted to our cultural improvement. Father Ninian, you see, like so many English Jesuits, was an intellectual. The only thing was, he did not seem to know very much. However, ignorance did not stop him from enriching our little brains, and I am thankful that, unlike Rita Byrne Tull’s trainee teacher friend, he never tried to convince us that the murderous psychopath Che Guevara was somehow kin to Christ. I do not recall Father Ninian ever mentioning politics at all – or, indeed, Christ, come to that.

His great contribution, for the sixth formers, was what I recall was dubbed the Culture Club. (I need hardly add that this was in the days before Boy George was a household name.) This was a weekly after school club where our chaplain would lead us in pursuits such as listening to classical music, reciting poetry, and discussing art. My charge that he did not seem to know much is based on one particular Club meeting, where he gave us a slide-show of portraits of writers, whom we were then invited to identify. Father Ninian didn’t seem to recognise many of them himself – though in retrospect perhaps he was (very skilfully) dissembling for our benefit. If so, he was a damned good actor.

My favourite session of the Culture Club, and one which is quite frankly unforgettable, was when he asked us to choose our favourite poets. But we were not asked to recite their poems – being a natural performer, Father Ninian took that duty on board himself. Now, this being the 1970s, there was of course one earnest young sixth-former whose brain had been frazzled by too much Bob Dylan. Before Sir Christopher Ricks and others took up the Dylan-as-great-poet baton, my schoolmate was already there. Dylan, he opined, stood alongside Wordsworth and Tennyson and all those dead fuddy-duddies, in fact he was probably the greatest poet of this or any other age.

Father Ninian, who was decisively unhip, seemed mildly amused by this encomium. To his credit, however, he treated it with respect, and, taking from my friend his well-thumbed and dog-eared copy of Dylan’s Writings And Drawings (1973), he picked a lyric to recite to us. His choice fell on A Hard Rain’s Gonna Fall, and he proceeded to declaim it to us, the whole damn thing, verses and chorus, very slowly and “significantly”, enunciating every last syllable, in that Michael Palin voice. It was at the same time one of the funniest and most excruciating episodes of my life. How I wish I’d had a concealed tape recorder.

After leaving school I never saw Father MacNamara again and, in truth, seldom gave him any thought. Yet to this day I cannot listen to A Hard Rain’s Gonna Fall without hearing his voice and recalling my desperately stifled giggles.

7 thoughts on “My Favourite Jesuit”