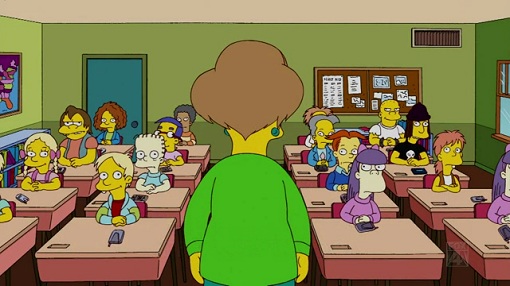 Education standards are in the news on both sides of the Atlantic. In today’s dispatch, Rita wonders whether America really values its teachers…

On my first day of student teaching I exchanged my hippie duds for what I thought was a suitably sober, professional outfit: a plain grey skirt and a maroon sweater. Unfortunately that turned out to be the exact colors of the school uniform and I spent my first day being mistaken for a new student instead of a teacher.  My teaching career was pretty much all downhill from there.  During that misspent year I visited a friend who was teaching in another town.  I sat in on his religion class as he lectured off the cuff in front of a large poster of Jesus.  At one point he dramatically flipped the poster over to reveal a portrait of Che Guevara, asserting that the two revolutionaries shared the same message.  The students slumped in their seats apparently bored by this novel approach to religious instruction.  Luckily for my friend this took place in England.  If he had tried the same thing in America he would have been under lock and key before the school bell rang. Future generations of English children were spared when we both moved on to other careers.

I may not have taken up the teaching life, but I do have enormous respect for teachers. My father was a teacher.  Among my earliest memories is seeing him take off his bicycle clips in the evening after cycling from Dagenham to work in the East End.  In later years he traveled the Central Line to Mile End station every day.  He used to say that the only person who could walk the streets safely in that neighborhood at night was a nun from the local convent.  He spoke of the weapons he confiscated in class, usually knuckle-dusters. How quaint that sounds now that guns are so commonly found in American schools.  He taught history.  One of his favorite stories was about the boy who answered the question “What is the Tudor Rose?” with “That’s the pub down the end of my road.” His career spanned the demographic changes in London that turned the old Cockney East End into a multicultural melting pot.  In one of his classes every student spoke a different language.  His students revered him and many kept in touch for years after leaving school, laughing at memories of the troublesome youths they had been.

I’m thinking about all this because with the Chicago teachers’ strike, dismay over falling test scores, and the dueling education policies of the presidential candidates, teachers are in the news again.  There is a general feeling that American education just isn’t what it used to be, and comparisons with other nations are certainly not flattering to the U.S.A.  The media is filled with theories.  Could we be falling behind in science education because of the widespread attempts to inject creationism into science class?  That sounds reasonable.  In her first year at college my daughter met a girl who was planning to major in science.  She had never heard of evolution; it was never mentioned in her Kansas high school.  When she learned about it in a college class she was completely shocked and sobbed on the phone as she confronted her parents about why they had kept her in ignorance.  On the other hand some voices claim that education is failing precisely because God is left out of the classroom. There are plenty of scapegoats: lazy parents, too many electronic distractions, too much government, too little government, and of course the teachers themselves. It seems that every political season, at the national and the local level, teachers, and especially the teachers’ unions, become a favorite punching bag.  When local budgets are tight and teachers’ pay is in the news it is common for teachers to be attacked for the burden their salaries and benefits place on taxpayers.  But compare teachers’ pay to that of most other professionals or to your average hedge fund manager and you find that they are actually doing one of the most important and difficult jobs in the nation for very modest compensation.  As President Kennedy said: “Modern cynics and skeptics see no harm in paying those to whom they entrust the minds of their children a smaller wage than is paid to those to whom they entrust the care of their plumbing.”

I have my own theory about why education isn’t what it used to be.  It goes back to the 1970’s.  When my husband was in law school there were a handful of women in his class, the first wave of what would become a flood of women entering the legal profession. When he began his career as a government lawyer in Washington D.C. many of his colleagues were women.  (Only a generation before, Sandra Day O’Connor, a future Supreme Court Justice, was offered a job as a secretary when she graduated from law school).  These women were very conscious of their position in the vanguard.  Combine that with the fact that the legal profession attracts assertive, combative types and the atmosphere of militant feminism in vogue at the time and you get a rather toxic brew of contempt for women who made more traditional choices in life.  At the time I was the stay-at-home mother of a young child and pregnant with another.  At social gatherings I was often treated with patronizing disdain.  “I see he keeps you barefoot and pregnant” said one of these lovely ladies before moving on quickly to talk with someone more important.  The disdain wasn’t reserved for mothers, but for any traditional woman’s role.  “Don’t get me wrong, I had a teaching credential before I went to law school,” said one woman as an intro to disparaging those who “settled” for teaching.  My library degree hardly helped my reputation in these circles.

Once upon a time a narrow range of career options was available to women: teaching, nursing, secretarial work.  But as opportunities expanded in the 70’s and 80’s the smartest women chose more prestigious and lucrative careers in law, medicine, and the corporate boardroom.  The best and the brightest who once educated our children disappeared from the classroom.  I don’t mean to suggest that there are no talented, dedicated teachers out there, but I do think this social change had the unintended consequence of lowering the status of teaching and shrinking the pool of top-notch students who enter the profession.  Now if only teachers were paid as much as lawyers, doctors, and hedge fund managers that would be a change for the better.  Then we could finally put to rest the old adage gleefully quoted by one of those women lawyers: “Those who can do, those who can’t teach.”

5 thoughts on “On Teachers”