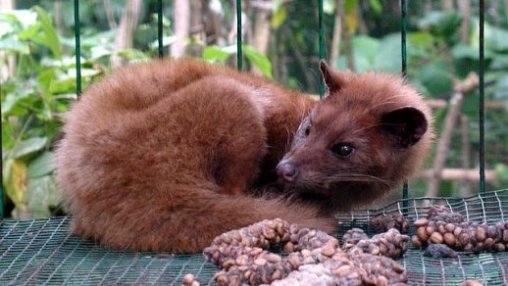 In which Luke Honey manages to blag some eye-watering coffee – eye-watering, that is, both in its costliness and its method of production…

One of the amusing little perks of the food blogger’s existence are the numerous unsolicited emails you get from pushy PR companies desperate to flog you their wares. Not the emails as such, but the free things they want to send you, or the events they want you to take part in. Over the years we’ve had organic chickens dumped on our doorstep, invitations to “exclusive” Creole cook-ins, unlimited supplies of newly launched breakfast cereals, an opportunity to join a van load of “kids” to pick wild garlic in a meadow in Dorset, and the chance to appear as a studio guest on one Mr Gordon Ramsay’s “F Word” television programme. I wasn’t sure about the last invitation. I had several prolonged chats with a hyped-up production assistant who required me to be at their television studio in Camden Town the next day, dressed in black tie; at eleven o’ clock in the morning. As I’ve got a job of sorts to hold down at the Blacking Factory, and I didn’t really fancy the idea of being mistaken for a worshipful brother, I turned this golden opportunity down.

One of the better offers was from some upmarket coffee company, which volunteered, very generously, to send us a free batch of coffee beans. “You can have whatever coffee you like” they said. “Okay then” I said, “Send me some Blue Mountain!”. As you know, Jamaican Blue Mountain is one of the most famous coffees money can buy (as championed by that arbiter of elegance, Mister Bond) and it also happens to be one of the most expensive. The Blue Mountains are found between Kingston to the south of the island, and Port Antonio to the north. They rise to over seven thousand feet high. I read somewhere that the Jamaican pickers have to scale rocky outcrops to harvest the coffee, although, in truth, the coffee is grown on the misty lower slopes at about three to five thousand feet above sea level.

Another coffee of choice is Kopi Luwak or Civet Coffee. This is quite possibly the most expensive coffee in the world, with prices reaching $160 a pound. It’s produced in the most revolting and extraordinary way. Someone in Mrs Aitch’s office heard that I wrote a food blog, and offered, very kindly, to give us a sample from his private supply. It duly arrived in a jam jar- enough to make about two small petit cafés. I gave our lucky, albeit suspicious, guests the chance to sniff it at a recent dinner party. “Fruity”, “Chocolaty”, “Rich” we all agreed. Some bright spark pointed out that it looked a bit like rabbit droppings. She was more right about this than she realised. It is droppings. But it ain’t rabbit. It’s from a civet. Or more accurately the Asian Palm Civet (Paradoxurus hermaphroditus). I have to confess to you that I’m not exactly sure what a civet is: the furry critter looks a bit like a rodent-weasel cross; it may even have something to do with cats. It has a tail. Anyway, the civet munches away on coffee berries, which then pass through the digestive tract, before being “defecated” (as Wikipedia rather coyly puts it) into clumps. The droppings are collected, washed, dried in the sun and given a light roasting.

And what does it taste like? I hear you ask. Very rich in taste, utterly smooth, almost like drinking a cup of dark chocolate, surprisingly fruity, (as Her Majesty might have said), hints of strawberry. All that chemical stuff churning around in the civet’s stomach seems to have a beneficial effect on the taste of the bean, eliminating all traces of bitterness. Aesthetically, the coffee is pleasing too; thick and deeply black in colour. It was truly divine, the nectar of the gods. Recycling’s finest hour.

Luke Honey is a London auction specialist and food blogger at The Greasy Spoon.

14 thoughts on “Civet Coffee: The Taste of Money”