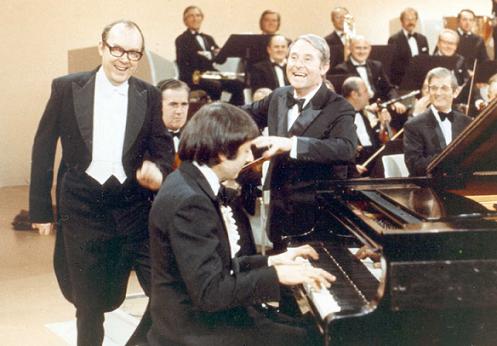 Can serious music be funny? This week Mahlerman brings us four pieces guaranteed to raise a smile…

Serious music, and humour; it has never really worked has it? And although Papa Haydn may have raised a laugh in 18th Century Europe with his ‘Surprise’ Symphony, and Mozart with his ‘Musical Joke’ with deliberate discords, they sound very arch and contrived in today’s sophisticated landscape.

The only world I knew, as a child, where sophisticated music and lyrics could genuinely raise a smile – a laugh even – was the 19th Century English satirical landscape conjured up by the mellifluous lyrics of William Schwenck Gilbert and his partner, the Anglo-Irish symphonist Arthur Seymour Sullivan. G&S was part of the fabric of everybody’s lives after the war, and it would not be too much of an exaggeration to say that every musical schoolboy had some jovial uncle who rammed this wonderful music down his throat virtually from birth. And as I scraped away on my fiddle in the orchestra pit of the Leamington Spa Pump Rooms, I was intoxicated by the sight of row upon row of the audience beaming and yes, laughing, at the thrill of it all.

Leonard Bernstein was a huge fan of G&S, and it showed in his landmark operetta Candide, a number from which we heard recently on Lazy Sunday – ‘Glitter and be Gay’. Here, from late in the second act is another tremendous ensemble ‘What’s the use’, which in this exposition does not feature the singers but, with his back to the house at the Vienna Volksoper, the outsized conductor Joseph R Olefirowicz who, like many big men, seems particularly light on his feet, almost balletic.

At around the same time as I was scraping in the pit, my mother was glued to our 14″ Ekco black and white watching the great Hungarian virtuoso Georges Cziffra taking a concert grand apart. Looking now at his swarthy good-looks and knowing, as I now do, about his extraordinary life, I’m sure that it was more than his keyboard skills that lured my mum to the flickering screen. How poignant also to remember that in those far-off Reithian days, when our public service broadcasting was admired around the world, there would be enough interest around these Isles to sustain such highbrow fare. In this short clip he arrives much as the young Franz Liszt might have done, discards his jacket, and gives us some extravagant Chopin, distorted to match his staggering technique. The playing brought a smile to my lips; the clipped ‘thank you Mr Cziffra’, delivered in the stock BBC voice of that time by a deferential producer really got me going.

‘Some may say that I couldn’t sing, but no one can say that I didn’t sing’. Within that short phrase from Florence Foster Jenkins we capture the essence of this unique singer. Apparently (though I doubt actually) unaware of her less than perfect pitch and very flexible time-keeping, this clever and determined woman sailed on without a backward glance, buoyed-up by a substantial inheritance from her banker father. This dogged belief in her own ability was rewarded later in her long life by an evening at New York’s famous Carnegie Hall, which was quickly sold-out and three times over-subscribed, the audience working themselves to a fever-pitch of admiration. Here, as the Queen of the Night in Mozart’s Magic Flute she fearlessly attacks one of the high points of the soprano repertoire, an aria where many famous names have come unstuck. Not Miss Jenkins.

The Prelude in C sharp minor by the great Russian virtuoso and composer Sergey Rachmaninov, appeared when he was just 19 and became the single solo piece that identifies this soulful aristocrat of the piano, and although he lived until the middle of the 20th Century his music took no account of the revolutionary sounds appearing at that time, remaining firmly rooted in sombre, Slavic melancholy – a final expression of the tradition embodied by of Tchaikovsky. Yes, he had big hands – able, it was said, to span twelve white notes comfortably. This deformity is taken on cleverly by the pianist Hyung-Ki Joo who, being Korean, has…..small hands – but with the help of his ‘stooge’, the Russian virtuoso Aleksey Igudesman, they show that imagination can triumph over physical limitations.