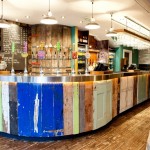 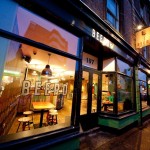 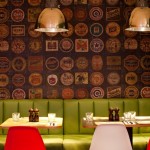 Brit visits a new ‘craft beer bar’ slap-bang in the middle of Bristol’s Studentsville, and wonders if, despite everything, the world has become a better, more civilised place…

You may not credit it, but I have not always been the suave, immaculately-attired, dashingly handsome Brit familiar to millions of Dabbler readers. Once I was a disgusting Philosophy undergraduate, a scraggy-haired Trot: gangling, skint and with a wardrobe consisting almost entirely of unforgivable jumpers. Think Sideshow Bob crossed with Paul McGann in Withnail before he has a shave at the end.

And at this time I lived, along with another equally revolting product of the British schooling system, in The Worst Flat in the World. I defy all comers purporting to challenge that title with their own stories of student hovels. This was worse. It was in a damp Victorian basement that had seen neither a ray of sunlight nor a cleaning product of any sort in the latter half of the twentieth century. The chutzpah of the landlord in advertising it as a ‘two-bedroom apartment’ was, with hindsight, impressive: the sole washbasin was in my bedroom, the shower was a hose under the stairs and the toilet was an outside porch infested with a variety of slug that I can only assume had been genetically modified to withstand extremes of cold. So freezing was the flat at night that in the winter I would go to bed wearing socks, trousers, all my unforgivable jumpers and a beanie hat. Sir Ranulph Fiennes has lost fingers in warmer climes.

You will understand, then, that I spent as little time as possible in this flat, preferring to take myself off to the snug nooks of the library, the Union, or, better yet, the pubs of St Michael’s Hill. I spent many a Happy Hour in the White Bear and the Highbury Vaults, sipping the cheapest lagers available. We were scruffy, studenty types and these were scruffy, studenty pubs. I’ve scarcely been back to the area in last fifteen years, but I did the other night and I can tell you that, like me and the world, it has changed.

I went at the invitation of Bath Ales (with whom The Dabbler has been on good terms ever since this  tribute to Gem, the finest beer in the world) for the launch of their latest venture Beerd, a slightly awkwardly-named little slice of drinkers’ heaven. I have nothing but admiration for Bath Ales. Their Swan at Swineford is my favourite pub. They are bold and innovative. Pubs are dying all around us, yet Bath Ales are expanding, launching chophouses and loyalty cards, and everything they do is distinctive, impeccably tasteful and lavished with loving care.

It is obvious that great pains have been taken over Beerd’s design. Retro beermat wallpaper, exposed brickwork, floorboards,  coloured furniture – all beautifully done. The ambience is cool, but somehow seeming like it’s always been there. There are plenty of café-bars opening up around the country aiming for this feel, but Beerd’s selling point is to be built explicitly around the beer, capitalising on the explosion in popularity of craft microbreweries and general beer connoisseurship/snobbery. In other words, it’s like a wine bar for beer. The grub is designed for soaking up ale: freshly-made stone-baked pizzas and upmarket bar snacks, including massive pork scratchings advertised, with German-like bluntness, as ‘crispy pig skins’.

The choice of beers is vast – there are taps built into the back wall of the bar for nine guest keg ales, plus lots of cask and bottled beers from around the world. To help you get through a few of these without falling over, Beerd sells the stuff in one-third and two-third pint measures. You can choose from a menu (my one modest suggestion: the menu could be enhanced if each selection carried a little description of the taste, rather than just price and strength) or you can peruse a specials-style blackboard, and it was while doing just this that I noticed the price for a pint of an American ale with the delightful name of Raging Bitch. It was £9.00! True, Raging Bitch is 8.3%… but £9.00? That’s more expensive than the pizzas. Never could I have imagined, back in those Happy Hour lager years, that I would one day return to Studentsville to sip nine-quid beer from a dinky little one-third pint glass.

But Studentsville, as I said, has changed. There were always rich kids at Bristol University but they operated in an entirely different sphere to the normals. We used to call them ‘sloanes’: the boys were named Rupert and wore pink shirts; the girls had blonde ponytails, puffy black bodywarmers and drove VW Golfs. These days they’re all scruffy-chic and drive Minis, or so I’ve been told, I wouldn’t know. Are there are even more rich students now, to whom these infamous tuition fees are an irrelevance? I wouldn’t know that either. Perhaps it’s just that St Michael’s Hill has become a destination, in the way that areas unexpectedly do sometimes.

After leaving Beerd I wandered nostalgically around the neighbourhood. The manky old Somerfield is now a Co-op, but even the Co-op is posh these days, all organic this and free-trade that. The White Bear, once reliably grungey, is now lovely-looking. I don’t regret any of this because the place still has soul and character, and it’s a good thing that these nice places thrive and that landlords put some effort into attracting people for a night out. Beerd is a triumph: different and upmarket without being ostentatious. I will return and if you’re within striking distance you should definitely check it out.

On the way home I passed a bloody great fox. Bristol once had possibly the highest density of urban foxes in the world but then they were wiped out by mange in 1995. They’ve staged a comeback since, and this survivor was waiting politely to cross the road, like a guide dog. Perhaps this is how we – students, pubs, foxes – must survive these brutal times: by becoming more civilised.