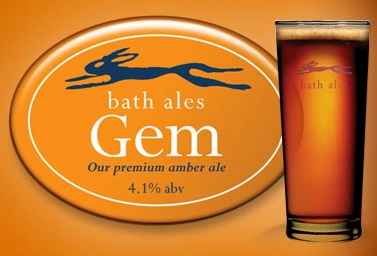 A bit tragic to admit it, but I can actually remember where I was when I had my first taste of Gem. It was 2005 and I was in the middle of a field just outside Chipping Sodbury, at, of all things, a Rotary Club beer festival. This was a relatively civilised leg of a friend’s stag weekend, and though I was rather drunk I was not so drunk that I didn’t know at once that this was a special ale. Doubtless I spent the next few hours lurching around, enthusiastically urging my fellow stags to spend their beer tokens at the Bath Ales stand.

Two things are notable about this: first, I’m no connoisseur but Gem clearly stood out in the tasting of what was, well, an awful lot of beers. Second – and this is an important clue to understanding the success of Bath Ales – I could remember the name and the logo when I woke the next morning, despite the condition of my head.

In the five years since that festival, I have consumed a fair few pints of Gem, as well as Bath Ales’ other lines which include Wild Hare – a summery pale ale – and Barnstormer, a rich, darker ale, almost rivalling Gem for ambrosial uniqueness. Also in those five years, Bath Ales’ beers have become ubiquitous in the off-licences, pubs and trendy café-bars of Bristol and surrounds, and word has begun spread across the country.

It’s always interesting to investigate what makes a particular business or product thrive in a marketplace, because the answers are informative about human nature: why do customers buy this in preference to that? Why has Bath Ales succeeded, relative to other independent micro-breweries?

Roger Jones, the company’s Managing Director, reckons that the key is that the partners are, uniquely, brewers and thus “the beer comes first.” But he is all modesty: “It is fair to say that we do not consider ourselves successful.”

That’s a tough argument to make. Founded in 1995 by former employees of Bristol’s now-defunct Smiles Brewery, Bath Ales has twice outgrown its premises, built its own bottling facility, begun retailing bottles nationally, established a shop selling T-shirts and other merchandise, and taken over nine pubs and a chophouse.

What it has never done is justify its name – all three of its plants have been in Bristol. “The original vision was to brew in Bath as a micro-brew pub serving the tourist industry. A site never came to fruition,” explains Jones. “Whilst sourcing some stainless pipe work in Bristol, one of the partners got involved with making a small brewery with some enthusiasts. The brewery was under-utilised and so space was rented to brew some ‘Bath Ales’ now and again…Once the casks were ordered, branded and banded in Bath Rugby colours, it was sort of too late to change to ‘Bristol Ales’.”

This was probably serendipitous. Bristol is a wonderful city but the name ‘Bath’ and its associations – honey-coloured stone buildings, Jane Austen, the weight of history – does convey an instant classiness. Combined with the hare logo, (“squashed rabbit”) Bath Ales has a clear and striking identity – so much cleaner and more memorable than traditional real ales, with their amateurish cartoon labelling and names like ‘Old Burt’s Gut-Rotter’.

“We did try to ‘modernise’ the image of brewers”, says Roger. “We’ve been copied by many now of course, but back in the early 90’s we genuinely were appalled by all the Malt and Hops images, and old worldly traditionalism. We wanted something that was modern and appealing to women as well as men. The hare device was always useful as a symbol of rareness, but it was the simplicity that appealed most. It translates well on t-shirts and the like.” 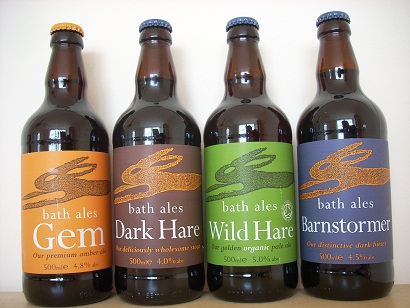 The Bath Ales brand does fit remarkably well into the current drinking landscape. There’s a trend generally in food and booze for the upmarket, the high-quality, the local and the ‘authentic’, and drinkers young and old who shun the anarchic Saturday night city centres now do their quaffing in faux-retro wood-and-blackboard bistros and café-bars (exemplified by the ‘Lounge’ chain that has spread all over Bristol and beyond), and foodie gastropubs.

At any rate, the company’s management understands something about the scene: Bath Ales is expanding its range of pubs at a time when, nationally, almost 30 are closing per week. “Home drinking has replaced the daily trek to the pub,” Jones acknowledges. “It has only taken 10 years and is pointedly to do with the widening price differential between the on and off trade. We recognise that people are out less often but will potentially look for special occasions to come out, so we have positioned most of the pubs with a better food offering. In fact, while we always planned to have a flagship pub, we did not actively go seeking any of the pubs we have…they sort of came to us.”

They’re also not afraid to embrace the trends that periodically sweep the industry. In 2009, a subsidiary Bath Ciders brand launched Bounders, to capitalise on the craze led by Magners and Bulmers; and this year there has even been a ‘ginger beer’. Ginger Hare sounds pretty ghastly to me and Jones admits it was a “love hate” drink, though he insists that “it was a proper beer with ginger in it, as opposed to the fermentable sugar and flavouring like Crabbies alcoholic pop.”

When I ask Jones about the process for creating such new lines, he talks about “trying to get a feel for what we see the customer wanting with a little bit of what we feel would be a challenge.”

What customers mostly want is Gem. It accounts for up to 70% of Bath Ales’ production and the company has invested in promoting it as a brand leader. But marketing-speak aside, it must be popular chiefly because of its sheer, unspeakable deliciousness.

I ask Jones if there’s a secret to the distinctive taste. He says that the inspiration was the London Pride brew of the late 1980s and early 1990s, when you could only buy it in the capital. He then launches into some fine brewer-speak: “Awful cliché but the best malt has to be used: floor malted barley and the variety has to be Maris Otter. It is useful to push the OG [original gravity] to the upper end of the scale so that the attenuation [fermentation process] can last a day or so longer and the condition can be retained. We utilise a hop with full mouth feel characteristics and try and retain a caramel element to the beer…obtained by using pure malt and no sugar derivatives.”

Staggeringly, Jones adds: “In actual fact Gem is continually criticised by CAMRA bods, as caramel is seen as an off flavour.”

Pay no attention to these CAMRA bod fools. I’ve introduced Gem to numerous beer-drinkers and they’ve all fallen in love at first sip. In any discussion of ales in the area formerly known as Avon, Gem will inevitably come up, with many a moan of yearning. I suggest it is this word-of-mouth about Gem that has ensured Bath Ales’ success. And though Roger Jones of course denies that they’ve actually had any success, he will allow that “at least to some extent we have established Gem as a product customers seem to like.”

Now there’s an understatement. The Gem formula is pretty simple, though achieving it is immensely difficult: create a delicious, distinctive beer with a strong, distinctive brand. I’ve been ‘seeming to like’ absolutely gallons of the stuff for the last five years.