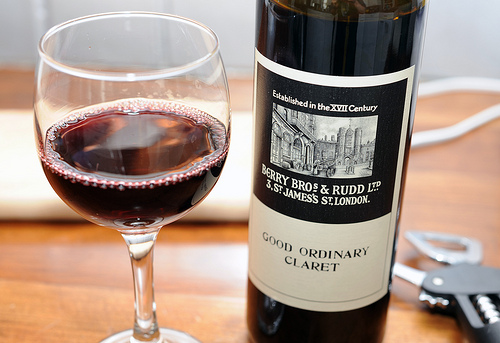 It’ll soon be time to start stocking up on the Christmas booze. Here’s The Dabbler’s wine expert Henry Jeffreys on good ordinary claret…

What thing is the most evocative of Christmas? For some it’s the sound of carol singing, for others it’s the unwrapping of presents, for me it’s the sediment on the side of a claret bottle. Just a glimpse of the purple powder brings me back to that time of year when my father used to get out the good stuff. My brother and I had to be very careful when pouring that none of the deposit went into anyone’s glass or we would sharply reprimanded and the day ruined. Happily our dear old Dad has mellowed a lot since then and Christmases are now more relaxed affairs. One thing that hasn’t changed is the wine: always claret for the men and white burgundy for the ladies (that’s just how it seems to fall, men are allowed burgundy and the women Bordeaux, we’re not that old-fashioned).

It has to be a particular kind of claret, mind you. We don’t want any soupy, oaky, Californian-influenced blockbusters, not at Christmas. It should be something from the left bank, something mature and very drinkable. Sounds expensive I can hear you thinking and my ideal wine is a little pricey: Les Ormes de Pez 2001 at around £30.

Fortunately I stumbled across a wine that does something similar for a third of the price. I was dining at the high table in an Oxford College simultaneously gagging on the horrid food and murmuring enthusiastically at the excellent wine. Nice to have my preconceptions about college catering confirmed. The wine served with the chewy pheasant that everyone thought was pork was Chateau Haut-Brega 2005. The nose smelt of pencil shaving and cigars. The palate was perfumed and a little plummy – a bit like my dining companions. It was mature, very drinkable and made the poor food not matter a bit. I would have guessed that the wine would cost at least £15. The next day I found it on the internet for £8.75.

If you read the wine press you will hear a lot about the stratospheric prices that the top Bordeaux can command. The flip side of this story is the ridiculously cheap prices of the lesser ones despite the generally high quality. Those wines I remember from family Christmases past were not expensive, they were just good ordinary claret.

Les Ormes du Pez 2001, St. Estephe costs £32 at Berry Bros & Rudd. I would recommend Good Ordinary Claret from the same merchant at £7.39 a bottle. I had the 2008 last night and it’s superb stuff – a little fuller, plumper and, day I say it, more modern, than you might expect but wonderfully drinkable. You should always have some of this in reserve.

Chateau Haut-Brega 2005, Haut-Medoc, £8.75 from Cambridge Wine Merchants . They also have the 2006 which probably won’t be as ripe and full.

Cabernet Sauvignon, Weinert, 2004, Argentina. £9.50 from the Wine Society  It’s not claret but it does the same job being very fine, mellow and digestible. It tastes like a cross between old-fashioned mature Brunello and claret. Just the sort of wine that Argentina should be making more of instead of all those ‘blockbusters’ in thick glass bottles that make your teeth hurt.