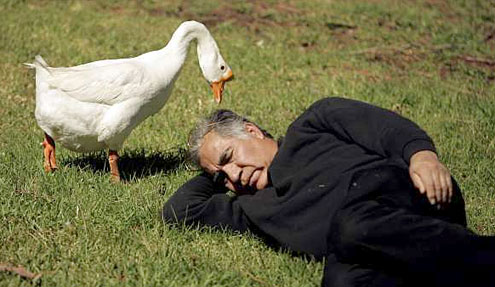 There is a common phrase, often used when one wishes to disparage someone as a timid milksop. We all come across timid milksops from time to time, and though in the spirit of Christian charity we should not disparage them, we do, oh we do, possibly to make ourselves look hardy and tough by comparison, even, or especially, when we are hardly hardy and tough but, rather, fearful and insecure. It is that very insecurity that can cause us to disparage another, as a way of distracting attention from our own timidity and milksoppishness, which we otherwise try to disguise by means such as bumptiousness and the glugging of huge flagons of beer. This is elementary psychology.

The common phrase we resort to is “He wouldn’t say ‘boo!’ to a goose”. I am sure you have heard it many times, at cocktail parties or in sporting arenas, and not only have you heard it, in all likelihood you have said it yourself, more than once. Such a timid milksop is he, or she, we are saying, that they are too frit even to say “boo!” to a goose. The inference is that hardy tough persons – among whom of course the speaker intends it be known they are counted – would say “boo!” to a goose, and think nothing of it.

It is high time, I think, that we examined this assertion. John Cheever’s 1951 story Goodbye, My Brother famously ends with the question “Oh, what can you do with a man like that?”, and I confess I ask myself that whenever I consider the thought of a hardy tough cove barging about in the vicinity of geese and saying “boo!” to them. For one thing, it is neither seemly nor dignified, and we should always strive to be both seemly and dignified, for on such foundations are civilisations built. And for another thing, it is a rather foolish act, for what do we expect the goose to do in return? Let us remind ourselves that whatever else it might be, a goose is a bird, and as such it will treat with incomprehension the doings of humankind. We are alien beings to them, as they are to us. Look into the eyes of a goose or a swan or even a budgerigar and you will see a deep black well of fathomless inhuman savagery.

So we might as well say “pencil” or “Heraclitus” as “boo!”, for all the difference it would make, to the goose. What the goose will do is to honk, to jut its head forward, and to make pecking gestures with its beak, whatever we say to it. Oooh, missus! How terrifying! All we need do is scamper off in the opposite direction, or keep a sturdy fence between us and the goose. In either case, we will remain unharmed, whether we are hardy and tough or indeed timid and milksoppish.

And therein lies the point. To suggest that somehow, saying “boo!” to a goose is evidence of hardihood and toughness is fundamentally misconceived. If we still wish to disparage someone as a timid milksop – and I hope I have demonstrated why we should not, but I won’t hold my breath – then we need, surely, to find a new phrase, one that will stand up to rigorous analysis, and will probably not involve birds.

Finally, as a visual example of what I have been so patiently explaining to you, here is a short film by the intrepid independent film maker Ned Ouwell. Note the sturdy fence.

6 thoughts on “On Saying Boo to a Goose”