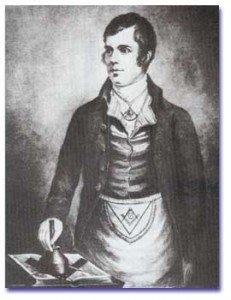 On the eve of Burns Night (25 January), this question is on the lips of the nation.

After all; Scots, honorary Scots and wannabe Scots (and who doesn’t?) all gather on this night to eat haggis, recite his poems (badly) and drink whisky. And so we need to know, just in case the great man himself drops by for a drop: what would Rabbie drink?

Well, leaving aside the thought that as a working-class lad from the west of Scotland today’s honest answer is probably ‘vodka’, he did leave us some hints in his work.

He does mention whisky from Kilbagie – but he wasn’t impressed. The distillery has long since closed but, in its day, it was one of the largest in Scotland though producing mainly spirit for export to England where it was rectified (re-distilled and flavoured) as gin. Drunk straight from the Kilbagie stills, as would have been the case, he describes it as “a most rascally liquor”. I doubt we’d be impressed.

Burns’ great poem Scotch Drink laments the loss of Ferintosh whisky. This was altogether a different matter – a quality product available at a lower cost than many of its competitors due to an unusual and generous tax concession.

Because Ferintosh’s proprietor Duncan Forbes supported the Hanoverian government against the Jacobites (Bonnie Prince Charlie’s mob) he found his distillery burnt down by them. So, in return for his loyalty, the government gave him the right to distil the product of his extensive estates free of tax. Eventually in 1794 they had to buy him out, at the staggering cost of £20,000. Who says out of control public expenditure is a new thing?

Today the nearest distilleries to Ferintosh would be Dalmore, Glenmorangie or Balblair. You won’t go wrong with a glass of any of these as you toast “the immortal memory” and remember, in the words of the poet,

Wherever you eat your haggis and however you drink your whisky – Slainte!

Ian Buxton is one of the UK’s leading drinks writers, specialising in whisky and spirits, and is the author of the bestselling book 101 Whiskies to Try Before You Die.

12 thoughts on “Dabbler Soup – What would Rabbie drink?”