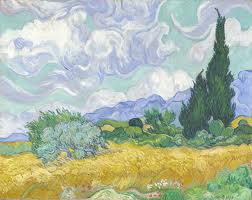 Why? Well, when I see the National Gallery’s A Wheatfield, with Cypresses I’m rather overwhelmed by its liveliness – it seems to crawl and teem with life. Each of its subjects – all distinct: the wheat, the bushes, the trees, even the inanimate ones such as clouds and hills – seem furiously concerned with existence.

Van Gogh’s landscape paintings are usually accounted part of the Western Romantic tradition: a picturing of God in nature that elided into making nature serve to express the feelings of the artist.

Certainly, the natural phenomena present in Van Gogh’s paintings of this period – the late-1880s – seem particularly agitated; they almost vibrate with a desperate desire. They remind me of hothouse plants that are just about to outgrow their strength, elongate, curl and fall back on themselves: a growth that’s so furious that it’s destined to become self-defeating. Wheatfield, with Cypresses was painted whilst Van Gogh was in the asylum in Arles.

However, I prefer not to see the character of these paintings merely as extensions of the artist’s mental state. The elements seem too powerfully themselves, somehow. I wonder whether Van Gogh’s well-attested debt to Japanese art – stylistically and in subject matter – also extends to some of its spiritual content.

Shintoism, Japan’s official religion, has its roots in animism, which ‘encompasses philosophical, religious, and/or spiritual beliefs that souls or spirits exist not only in humans but also in all other animals, plants, rocks, natural phenomena such as thunder, geographic features such as mountains or rivers, or other entities of the natural environment.’ The customs and values of Shinto are inseparable from those of Japanese culture, not least its painting. It helps explain the Japanese artistic reverence for landscape:

Some of the objects or phenomena designated as kami [loosely, spirits] are qualities of growth, fertility, and production; natural phenomena like wind and thunder; natural objects like the sun, mountains, rivers, trees, and rocks…

In the ancient animistic religions, kami were understood as simply the divine forces of nature. Worshippers in ancient Japan revered creations of nature which exhibited a particular beauty and power such as waterfalls, mountains, boulders, animals, trees, grasses and even rice paddies. They strongly believed the spirits or resident kami deserved respect.

Perhaps Van Gogh – in his close study of Japanese woodcut prints, for instance – had absorbed some of this animistic sensibility?

I’ve found the closest analogy to what Van Gogh achieves in these landscape paintings in the work of another whose personal myth has almost overshadowed his work. He’s also someone whose exuberant expressionism is somewhat unfashionable, at least in fashionable circles – we appreciate a more restrained, understated, ironic approach in our arts nowadays.

However, in The Force That Through the Green Fuse Drives the Flower Dylan Thomas comes far closer than I can to illustrating why Wheatfield, with Cypresses possesses such fascinating and undiminished power:

The force that through the green fuse drives the flower
Drives my green age; that blasts the roots of trees
Is my destroyer.
And I am dumb to tell the crooked rose
My youth is bent by the same wintry fever.

The force that drives the water through the rocks
Drives my red blood; that dries the mouthing streams
Turns mine to wax.
And I am dumb to mouth unto my veins
How at the mountain spring the same mouth sucks.

The hand that whirls the water in the pool
Stirs the quicksand; that ropes the blowing wind
Hauls my shroud sail.
And I am dumb to tell the hanging man
How of my clay is made the hangman’s lime.

The lips of time leech to the fountain head
Love drips and gathers, but the fallen blood
Shall calm her sores.
And I am dumb to tell a weather’s wind
How time has ticked a heaven round the stars.

And I am dumb to tell the lover’s tomb
How at my sheet goes the same crooked worm.

It’s not just the forceful – almost excessive – expression that parallels Van Gogh: it’s the feeling of kinship evoked between man and tree, flower, stream; all kami, all subject to the same forces.

Was Thomas influenced by Van Gogh? Or did they arrive at similar destinations by drawing on different sources of animism, in Thomas’s case the druidical? But I’d better stop – that’s enough wild and windy speculation for today…