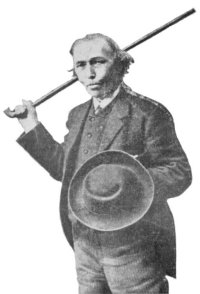 I think (after much agonising, for there is stiff competition here) that my favourite bit of William McGonagall – widely regarded as Britain’s worst ever poet –  is this verse from The Ancient Town at Leith, purely for the scrupulous attention to numerical accuracy:

Then as for Leith Fort, it was erected in 1779, which is really grand,
And which is now the artillery headquarters in Bonnie Scotland;
And as for the Docks, they are magnificent to see,
They comprise five docks, two piers, 1,141 yards long respectively.

In case you’re not familiar with him, William Topaz McGonagall was a self-educated hand loom weaver from Dundee, who decided in 1877 that he had a vocation as a wandering bard. His innumerable public performances produced much mirth, audiences routinely howling with laughter at his tragic poems and pelting him with rotten vegetables and so forth. He was blissfully oblivious to the derision, in which respect I suppose he is a sort of forerunner to those poor deluded souls who appear in the early stages of The X Factor, convinced that they are singing sensations and utterly dumbfounded when the judges inform them of their error.

McGonagall’s poems are invariably written in a succession of dreary but intrinsically funny rhyming couplets, with certain oft-repeated phrases, notably: “most wonderful to be seen”, and “the Silv’ry Tay.” You can read his entire oeuvre here, but The Tay Bridge Disaster is a good introduction. I reproduce it here in all its tedious glory.

Beautiful Railway Bridge of the Silv’ry Tay!
Alas! I am very sorry to say
That ninety lives have been taken away
On the last Sabbath day of 1879,
Which will be remember’d for a very long time.

When the train left Edinburgh
The passengers’ hearts were light and felt no sorrow,
But Boreas blew a terrific gale,
Which made their hearts for to quail,
And many of the passengers with fear did say-
“I hope God will send us safe across the Bridge of Tay.”

But when the train came near to Wormit Bay,
Boreas he did loud and angry bray,
And shook the central girders of the Bridge of Tay
On the last Sabbath day of 1879,
Which will be remember’d for a very long time.

So the train sped on with all its might,
And Bonnie Dundee soon hove in sight,
And the passengers’ hearts felt light,
Thinking they would enjoy themselves on the New Year,
With their friends at home they lov’d most dear,
And wish them all a happy New Year.

So the train mov’d slowly along the Bridge of Tay,
Until it was about midway,
Then the central girders with a crash gave way,
And down went the train and passengers into the Tay!
The Storm Fiend did loudly bray,
Because ninety lives had been taken away,
On the last Sabbath day of 1879,
Which will be remember’d for a very long time.

As soon as the catastrophe came to be known
The alarm from mouth to mouth was blown,
And the cry rang out all o’er the town,
Good Heavens! the Tay Bridge is blown down,
And a passenger train from Edinburgh,
Which fill’d all the peoples hearts with sorrow,
And made them for to turn pale,
Because none of the passengers were sav’d to tell the tale
How the disaster happen’d on the last Sabbath day of 1879,
Which will be remember’d for a very long time.

It must have been an awful sight,
To witness in the dusky moonlight,
While the Storm Fiend did laugh, and angry did bray,
Along the Railway Bridge of the Silv’ry Tay,
Oh! ill-fated Bridge of the Silv’ry Tay,
I must now conclude my lay
By telling the world fearlessly without the least dismay,
That your central girders would not have given way,
At least many sensible men do say,
Had they been supported on each side with buttresses,
At least many sensible men confesses,
For the stronger we our houses do build,
The less chance we have of being killed.

(I’ll be looking at some more gloriously bad poets soon…)