[The story so far… Slavoj Zizek has defeated Rod Lidl in an exclusive interview and, along with  Messiah White, has joined Tom Paulin’s Real GEAS, paramilitary wing of the Grayson Ellis Appreciation Society. Art Garfunkel has written an Adult Contemporary hit by plagiarising Alain de Botton’s Tweets, and Boris Johnson’s Nanny is on the trail of the Black Rabbit…]

One day notorious hack Rod Lidl arranged his sloppy and pointlessly provocative face as best he could and drove to Milton Keynes. Noseybonk, shrunk to the size of a Poison Smurf, wormed into his satchel and saw all…

All the hacks are gathered at the Milton Keynes MegaBowl, KaraokeZone and PopKornChicken Omniplex to write either snidery (Telegraph, Times, Just Seventeen) or gushes (Guardian, Independent, Whizzer and Chips) about the launch of the new DVD, Stunt Atheists 3: The Bright Stuff. Even more knives are out than usual because one of their number, Polly Townbee, is due on the podium.

Lidl snuffles along the aisles, selects a pew for totty-count and, oblivious to the bottomless hatred emanating from his peers, plonks himself next to the deliciously pointy Marina Hyde to take in the view. The hacks are seated in the nave of the Omniplex while, to left and right of the chancel, all manner of minders man the north and south transepts and a sunglassed-and-suited row of bruisers forms a protective rood screen to shield the Atheists from religious harm. Five empty thrones stand on the raised altar, bathed in the tubed light of the KaraokeZone, awaiting arses.

Lidl coughs impatiently, and soon all the hacks are at it. Bitter mumbles dribble around the nave. Eventually, to applause from the minders and bruisers, the five Atheists emerge waving from the sacristy and proceed to the thrones. First comes grizzlybearded American Daniel Dennett, then comes grizzlybearded American PZ Myers, here is Polly Townbee and here, to ecstatic cheers, Dickie Dawkins himself. The tallest of their number, Stephen Fry, steps forward to the lectern (Lidl moans outwardly, Marina Jekyll crosses her delicious pointy pins and pouts) and begins:

“Ladies and Gentlemen and journalists, thank you ever SO much for perambulating or traversing or locomoting, or trekking or touring, or wending, wandering or wayfaring, or jaunting or jetting or junketing, or scouring or seafaring, or cycling or skating or heavenforbid driving or Whatever
It
Is
You DID to succumb to your vvvanderlooost (open parenthesis,from the German of course: wandern: to hike and Lust, meaning desire, close parenthesis) and arrive here, in this splendid setting today.”

“And it is indeed a splendid setting. Why? Why? Why, or for the love of dear sweet Nellie, WHY, I hear you ask? Well I’ll tell you why. It’s because. And this is important now. It’s because the Milton Keynes MegaBowl, KaraokeZone and PopKornChicken Omniplex has never been touched by God!”

In the pews a deep, anguished groan emits from Bryan Grapplehard, the wincing aesthete. Next to him Nicholas Cohen shrieks “Get ON with it” (for although Cohen is himself a staunch atheist he cannot abide not being constantly in some sort of rumpus).

At last, a tellyscreen descends and we are treated to projected highlights. Who are these Stunt Atheists anyway? Let Noseybonk enlighten you. When Jackass ran out of spunk and the Dirty Sanchez crew had finally eaten each other, a gap in the market appeared for a new gang of bloody idiots to shock and mildly amuse the world. The brainchild of PZ Myers, whose notoriously uninteresting ‘desecration of the host’ trick had proved an internet hit amongst hipsters and gits, the first DVD, Stunt Atheists: Enjoy Your Life (and Make a Godbotherer’s One A Bit Worse) was a dismal flop, but the sequel, Stunt Atheists 2: Yo Mama is a Poor Clare, was merely a flop. High hopes are resting on the third instalment. We settle down to watch.

Scene 1: PZ Myers pours some communion wine down a drain and then spits a gob of phlegm after it. Townbee and Dennett laugh and say ‘no way, man’. Fry twitters uncomfortably. Dawkins leers.

Scene 2: Fry does an impression of Dr Rowan Williams and then says a foul word. Townbee and Dennett laugh and say ‘no way, man’. Dawkins leers.

Scene 3: Dawkins explains the concept of punctuated equilibrium and outlines broadly his reservations vis a vis its relative importance compared to natural selection, carefully noting that these minor controversies within the intellectual field do not affect the overall validity of Darwin’s central theory of evolution, to a bored infant.

Scene 4: Dennett punches a nun in the face, very hard.

Scene 5: Townbee takes a Good News Bible and goes through the New Testament with a crayon replacing each instance of the words ‘God’ and ‘Jesus’ with ‘bum’ and ‘wee’ respectively. This is a long scene and makes up the bulk of the movie.

Scene 6: Dawkins storms into an Ohio branch of Wal-Mart and unmasks the store Santa, then lectures the wailing children rapidly and incisively from a pop-up lectern before legging it.

Scene 8: Dawkins and Dennett surreptitiously insert leaflets explaining that There is No God and that they should Stop Worrying and Enjoy Their Lives into the compact Bibles being sent down the shaft to the 33 trapped miners in the Atacama Desert, Chile.

But Lidl has left enough long before this, and thus does not hear whether the congregation moans or cheers, for a note has been passed down the pew, and the note is signed ‘An Enemy of Slavoj Zizek’… 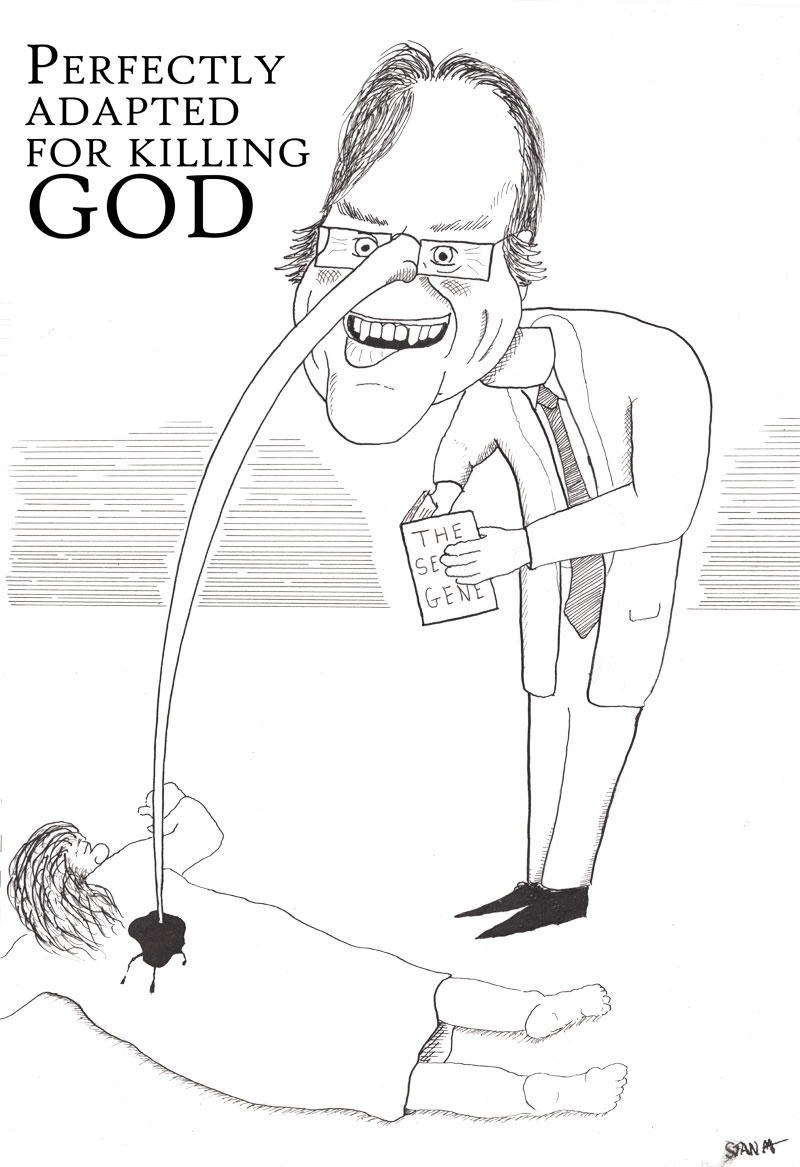 In the shadow of Titterstone Clee

Away in the wastes of Shropshire, in the shadow of Titterstone Clee, the outstanding poetic genius of his generation is staring into a well. Unseen in the black depths, Noseybonk stares back.

Millions would kill to be in Noseybonk’s place, down in that dank dark hole, for Grayson Ellis is reciting one of his most celebrated poems straight down it in cathartic heaves, as a crapulent sot or hack might puke his binge into a bogbowl. What ill-gotten riches would the sheep of those tangled churches of Ellis-worship – The Spiked Armadillo, the Grayson Ellis Appreciation Society, the Real Grayson Ellis Appreciation Society (Paramilitary Splinter Group) – sacrifice to hear but a line of the elusive Bard himself declaiming Innocence Lost…

Do you remember it? I cannot remember
anything else. That cold spring
of it all. On Ilkley Moor
I hiked all day. Through the rich
Yellow spikes of Bog Asphodel,
following the badger trails and chill cries of the
Redshank. In the limited shelter
of a brazen hillock
I gave up my innocence
to poetry, and to nature’s cruel Muse.

And after, starving and wide-eyed
as a tawny owl, flew raggedly back to
your uncle’s cottage,
Where you were waiting, reading Proust,
For a cheap cabernet and a can of meat.
You blessed our entwinement
twice, you blessed the can
of meat. Then, thrice blessed, we went to bed.
It was bacon grill, I remember.

Plunged in his own memorypools of gloom, Ellis whispers the last lines to the hills, then twitches. Some Shropshire sense, tingling in the pales of his vision, tells that an alien is near. He turns but sees nothing, only the wind and the Clees, so he turns back to his well.

But an alien is near, only this time it is not Noseybonk. Behind a semidistant copse an angular beanpole with a Tollund Man head is staring down the bulletpipe of a rifle and screwing his crosshairs into the centre of the Bard’s back. A spindlefinger curls around the trigger and squeezes…

Noseybonk acts for reasons beyond your ken. Materialising beside the would-be assassin he taps the tip of the gun… BCCHHKKKBGPUMPFFFFBGLUB! The bullet ear-scrapes Ellis and thuds into the scrub. Terrified Grayson jumps in the well. Terrified Tom Paulin runs like hell. Stumbling, tumbling, hurtling pell mell. Back to the landrover parked in the dell. Zizek and White are waiting in the back. They see Paulin in a panic attack. Throwing his rifle into a ditch. Zizek calls out, ‘Have you seen a witch?’ But what was it Tom, who did you see? Down in the shadow of Titterstone Clee? Tom jumps in the driving seat, slams into a tree. Shakes his head and bleats “Extraaooordinaaaaryyyyy…”

To be continued.  Noseybonk can see you. Illustration by Stan Madeley.

8 thoughts on “Noseybonk 7: The Stunt Atheists”