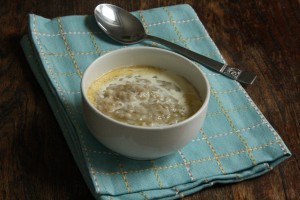 I know that it’s winter because the miasmic reek of porridge hangs heavily over our office. It’s bought into the building in cardboard cups, thick and stiff like wallpaper paste and glammed up with jam, bananas or compote. And thriftily, instant oats are stirred into milk and heated in the microwave, making the kind of soothing, bland pap that you don’t entirely remember eating.

The almost chewable smell of hot oats lingers all morning because porridge is the breakfast of choice for diligent worker bees. It’s economic, it’s healthy and it’s hard working – slowly digested so you won’t want to get up from your desk until lunchtime. Croissants and cappuccinos belong to the boom years. In straightened times, porridge and tea is what the industrious eat to show that they’re humble.

But I’ve never been able to keep food modest and simple. During the week I make porridge with jumbo rolled oats that I soak overnight in water with a handful of raisins or sultanas. More water, grated apple and cinnamon go into the pot with them and five minutes later I dish the porridge up, topped with a spoonful of sour natural yogurt.

But on the weekend I use steel cut oats. While jumbo oats are steamed before rolling so that they’re partially cooked and make for a fast porridge, steel cut oats (pinhead oats) are the whole grain that has been simply been chopped into three or four pieces.

They’re hard little things that rattle in the tin, but they make by far the best porridge – textured and chewy, held together in a silken, glutinous mess. It takes a little work (it’s porridge, diligence and hard labour is always involved somewhere along the line) but served steaming hot from the pan with cold cream and a slug of whisky, it makes a good breakfast for retiring back to bed with on an endless Sunday morning.

Porridge with cream and whisky

1. Bring the water to the boil, then sprinkle in the oats with a small pinch of salt. Bring back to the boil, stirring constantly, then reduce to heat to low and simmer, stirring frequently, for about 30–40 minutes or until the porridge is thick and creamy.

2. Spoon into a warm bowl and pour over the cold cream, the whisky and the honey. Eat immediately.

You can read more Jassy at her blog Gin and Crumpets.