[The story so far… Messiah White and Slavoj Zizek have failed to gain the attention of Grayson Ellis, while Ed Balls has failed in an attempt to improve his unpopularity with Rod Lidl by appearing on Celebrity Total Wipeout…]

The Shtick and the Black Rabbit

Thus the Mayor of London one fine autumnal morning, declaiming from the top of the stairs in his stripy jimjams. He raises a vuvezla to his lips and trumps a hearty fanfare (he had been given the device during the World Foopball Cup and parping it has become quite intoxicating to him). Noseybonk is clinging spiderlike to the ceiling and sees all.

“Nanny!” Boris cries. “Eggs, soldiers, crumpets, beans and two sugars in m’tea! I have a thumpingly busy day ahead!”

Nina the Latvian housekeeper, busy froddling eggs in the kitchen, smiles indulgently at this. Boris always calls her ‘Nanny’ on good days, when the Shtick is in full swing. This morning’s vuvuzela was parped with particular gusto, so it will be a day of great Shtick. Not like…Oh, but it is best not to dwell on it. A cloud passes briefly over her handsome Latvian features as she thinks about those other days; the bad days, when the Shtick has been misplaced and the Black Rabbit is near …. But now she smiles again as another tremendous parp on the plastic trumpet shakes the house and in stomps Boris, resplendent in his Thatch Helmet (this is a colander-like device inherited from his father, which the Mayor wears at night to ensure his thatch maintains the correct level of mussedness.)

“Guten morgan, Nanny!” he bellows jocularly, planting a clumsy smacker on her earlobe. “Oh no that’s the Hun, isn’t it?” Well whatever the bally Latvian is for Zip-a-dee-doo-dah then! Or perhaps that is Latvian? You would know better than I, ho ho. Oh I say, this is, this is, well I mean, this is, well I mean to say, this is, I mean come on. Marvellous. Revelling in my Shtick today, Nanny. Absolutely tons of the stuff.”

Nina puts his bib on and cracks open the first egg. “I am glad, Mr Boris. Here, eat your egg. Please. You are sleeping well?”
“Like a baby, Nanny, absolutely like a sweet little babber tucked up with big bosomy whotsit. Mater.”
“Is good. You are good boy really Mr Boris,” she pats his thatch with a distracted affection.
“I should bally well say I am. So what’s the buzz? Anything in the post?”

Nanny glances hesitantly at the tower of unopened correspondence on the Welsh Dresser.

“Come on, chuck it over. Let’s blimmin’ well take it on!”
“Oh Mr Boris. I not sure is such good idea. You have been so…happy. Why worry about-”
“No, no, never put off til today what you couldn’t have done tomorrow et cetera or whatever the bally saying is. I feel fit as a fiddle! Nothing whatsoever could spoil my Shtick today!”

With a slowness intended to indicate grave misgivings Nanny fetches the pile of post, and instantly Boris sets to work ripping and skimming, egg and tea and paper scrottling everywhere. “Balderdash! ….Lovely….In the bin!….Not him again…Hottentot!” he says things like, at intervals.

Nanny watches, her frown softening with diminishing concern. Perhaps it will be fine, she tells herself. Yes, it is fine. She forces herself to turn to the sink and commence the washing-up as if there is no danger, though in her spine is an involuntary cold steeliness, ready for the crisis. It comes. Boris’s sudden quiet is as loud as a roar. Nanny twirls. “Oh no, Mr Boris, what is it?”

“It’s a poem, Nina,’ says a small, crumpled voice, eventually. ‘A terrible poem. Somebody has sent me this poem as a cruel trick….”
“Oh Mr Boris, please, do not lose your Shtick.” She moves to hug him but he recoils, bleakly.
“I don’t deserve your pity, Nina. What is Boris without his Shtick? An overweight Tory with a silly haircut.”
“Oh no, do not talk this way, I beg-“
But his white gape and raised arm, held aloft like an exorcist’s cross, silence her. “It is the Black Rabbit, Nina. I must go.”

When he has left the room Nina picks up the fallen sheaf with trembling fingers. “Blackspot Poem” she reads, “by Messiah White”. Black spot? Mumbled memories of Blind Pew and pirate curses flutter by like ghosts. Treasure Island is Boris’s favourite bedtime story, after Watership Down. “…composting decaying culture to fertilize seedlings of renewal…” What is this? Who has sent it? The label is franked The Grayson Ellis Appreciation Society – a name without meaning for her. It makes no sense.

With a heartplummet of shock she glimpses a black animal shape at her eye’s edge, an oval face, four legs, two great ears…But it is only Noseybonk playing Leporine shadow-puppets on the wall, and instantly it and he are gone. 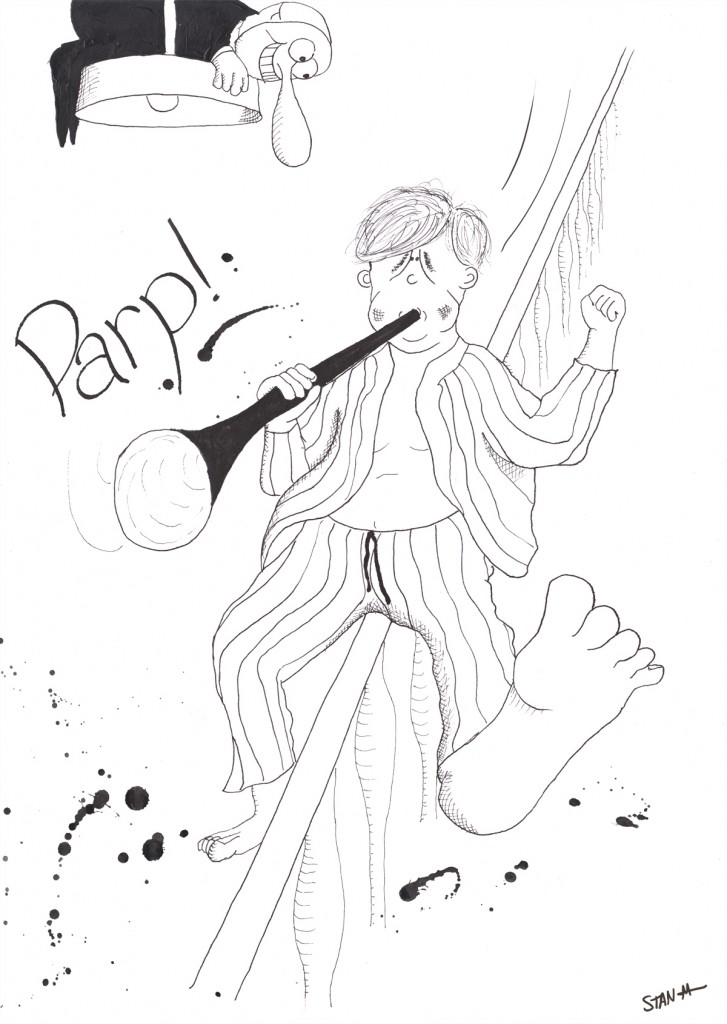 Notorious hack Roderick Lidl sniffed wetly, causing the droop of his sloppy and pointlessly provocative face to quiver. He drummed three yellowing fingertips on the top of the table that separated him from his opponent.

“What is your earliest memory?” he retched suddenly, an opening gambit designed to disarm with its unexpected obviousness. Lidl always spoke in bold. But Slavoj Zizek answered with cool disdain: “My mother naked. Disgusting.”

With the merest twitch of an eyebag Lidl acknowledged the reply. An experienced player can tell the worth of his opponent within seconds. Lidl now knew that he must play the long game. He opted for a simple one-two-three rally.

“What do you owe your parents?”
“Nothing, I hope. I didn’t spend a minute bemoaning their death.”
“What or who is the love of your life?”
“Philosophy. I secretly think reality exists so we can speculate about it.”
“What does love feel like?”
“Like a great misfortune, a monstrous parasite, a permanent state of emergency that ruins all small pleasures.”

Aaalll smaaall pleasures. The deranged academic elongated the words into a self-satisfied drawl; his eyes fierce; his beard like that of a Teeside Deputy-Headmaster circa-1972, aggressively so. The two men smoked competitively at one other. Time for a change of tack, thought Lidl…

“What is your favourite smell?”
“Nature in decay, like rotten trees.”
“How do you relax?”
“Listening again and again to Wagner.”
“Aside from a property, what’s the most expensive thing you’ve bought?”
“The new German edition of the collected works of Hegel.”
“What is your most treasured possession?”
“See the previous answer.”
“When were you happiest?”
“A few times when I looked forward to a happy moment or remembered it – never when it was happening.”
“Which living person do you most admire, and why?”
“Jean-Bertrand Aristide, the twice deposed president of Haiti. He is a model of what can be done for the people even in a desperate situation.”
“What do you most dislike about your appearance?”
“That it makes me appear the way I really am.”
“What would be your fancy dress costume of choice?”
“A mask of myself on my face, so people would think I am not myself but someone pretending to be me.”

Well played, sir, thought Lidl. Well played indeed. But have you got the stamina, sir?

“How often do you have sex?”
“It depends what one means by sex. If it’s the usual masturbation with a living partner, I try not to have it at all.”
“Have you ever said “I love you” and not meant it?”
“All the time. When I really love someone, I can only show it by making aggressive and bad taste remarks.”
“What has been your biggest disappointment?”
“What Alain Badiou calls the “obscure disaster” of the 20th century: the catastrophic failure of communism.”
“If you could edit your past, what would you change?”
“My birth. I agree with Sophocles: the greatest luck is not to have been born – but, as the joke goes on, very few people succeed in it.”

Precisely two questions later the two combatants stood and shook hands. “Call it a draw?” muttered Lidl. “Call it whatever your conscience tells you, my friend” said Zizek, smiling mirthlessly.

The Deranged Academic shuffled off to write long, strange poems, which he would put in envelopes and post to Grayson Ellis only for Janice Moor to destroy them unopened. Lidl stalked back to his hovel to type up the interview. On the television Ed Balls was being punched into a muddy bog by robotic boxing gloves. Umimpressed, Lidl grunted and clunked his Dictaphone to ‘on’. He shook his head. Damn that Deranged Academic. Until the last two questions he might, perhaps, have been able to call it a draw. But with them…no, there was no way out of it. He had been bested by the Slovenian. Zizek had even stolen his bold.

“What is the most important lesson life has taught you?”
“That life is a stupid, meaningless thing that has nothing to teach you.”
“Tell us a secret.”
“Communism will win.”

To be continued. All Zizek interview answers are genuine (via ZMKC) Noseybonk can see you. Illustration by Stan Madeley.

10 thoughts on “Noseybonk – 4. Boris and The Black Rabbit”